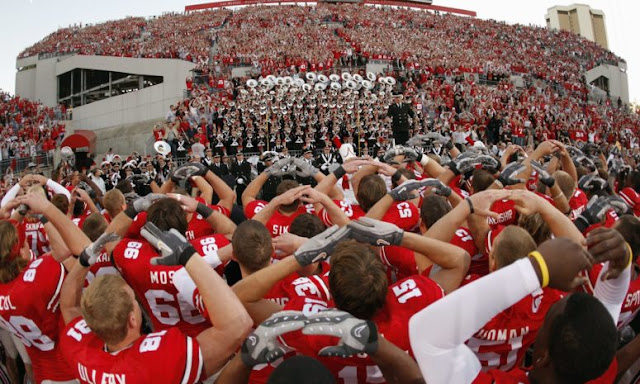 COLUMBUS, OH - OCTOBER 20: The Ohio State Buckeyes cheers on the field before a game against the Michigan State Spartans at Ohio Stadium October 20, 2007 in Columbus, Ohio. Ohio State won the game 24-17. (Photo by Gregory Shamus/Getty Images)

While all the buzz surrounding the Ohio State spring game was for the play of Justin Fields, the best moment came from Drue Chrisman. Punters aren’t thought of as flashy players, but he pulled off the proposal of the year.

Chrisman set up a fake kicking competition for his girlfriend at halftime. He was going to be the holder for her when it was her turn to attempt a field goal.

Well, it turns out the competition wasn’t actually meant to be. Instead of getting in position to hold the football, Chrisman got on his knee to propose to his girlfriend.

It didn’t take very long for her to say yes, and the reaction from his teammates was priceless.

Once the happy couple shared their time together, the rest of the Buckeyes joined in on the celebration.

Here is the heartwarming moment between Chrisman and his girlfriend:

Drue Chrisman with one of the smoothest proposals of all time.

Chrisman is quite the player in his own right, and he is certainly capable of flipping field position in Ohio State’s favor. However, it’s fair to say today will go down as his most important day of his college career.

Hey @averyanne33, what are you doing for the rest of your life? pic.twitter.com/kNQBDbRaaJ
— Drue Chrisman (@DChrisman91) April 13, 2019

Congratulations to the couple on one of the best moments we’ll see this year.