An unusually strong late-season snowstorm hit parts of United States on April 27 and 28, 2019, dropping heavy snow and causing hundreds of flights to be canceled.

The last time this much snow fell this late was back in 1910, AccuWeather Senior Meteorologist Alan Reppert said. 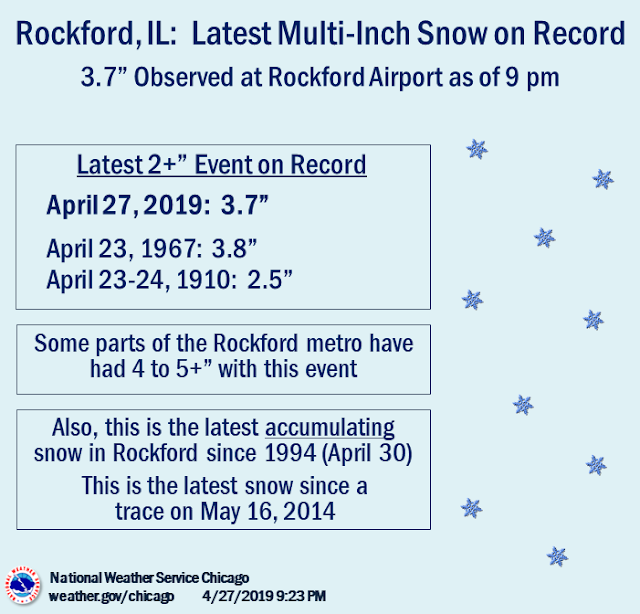 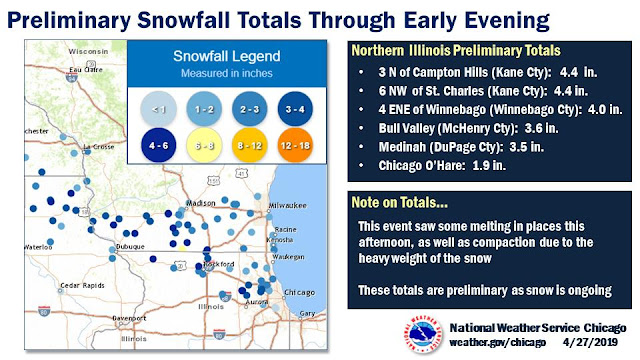 Between 7.6 - 15 cm (3 - 6 inches) of snow fell across a narrow swath of northeast Iowa, northern Illinois and southern Wisconsin.

Showers are expected across parts of the Mid-Atlantic region and southern New England early on Sunday in association with a progressive surface low, with some snow showers possible across the higher elevations of upstate New York, NWS forecaster Hamrick noted.

Improving conditions should return by Sunday night as a high-quality airmass settles in from the Ohio Valley to New England to begin the work week.

However, warm air advection ahead of the next storm system will lead to increasing clouds and more showers by Monday night, April 29 and into Tuesday, April 30.

The next low pressure system developing in response to a closed upper level low over Montana is resulting in snow showers across the northern Rockies to North Dakota.

Additional showers and storms are forecast to develop across the central plains as the frontal boundary intersects an increasingly more humid airmass from the Gulf of Mexico.

The heaviest rain is likely from Kansas to Indiana, with some locations getting 25 to 75 mm (1 to 3 inches) of rain by Tuesday morning.

By Monday, the threat of severe weather increases across the southern plains with the best moisture and upper level forcing residing over this region.

Warmer than normal readings are expected across the Desert Southwest and southern plains, south of the frontal boundaries.