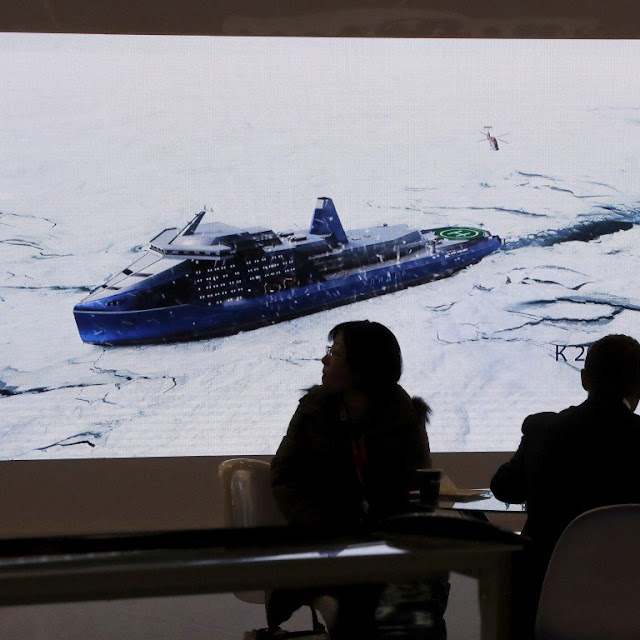 Russia wants to team up with China to build an Arctic shipping route, its ambassador to Beijing has said.
Moscow recently set out an ambitious programme to build new ports and other infrastructure facilities to increase cargo shipments across the Arctic, also known as the Northern Sea Route.

Russian ambassador Andrey Denisov told the South China Morning Post that negotiations over the supply of Russian gas to China through a route known as Power of Siberia Two were at an advanced stage.

“Almost everything has been completed so far but there is only one gap, which is the price,” Denisov said. “Price is the final detail but a crucial one and it’s quite natural in the discussion between seller and buyer – the seller wants the price as high as possible but the buyer wants to pay as little as possible.”

Denisov said the two sides were accelerating the pace of the negotiations and he was optimistic they would reach a deal. “China as a buyer needs gas and a reliable long-term source. Russia is definitely that kind of source,” he said.

Work on Power of Siberia One, also known as the “Eastern Route”, is expected to finish on December 10 and is expected to transfer 38 billion cubic meters of gas to China every year.

Any deal concerning Power of Siberia 2, or the “Western Route”, could further strengthen the energy alliance between China and Russia.
In recent years the countries that border the Arctic have become increasingly assertive about their territorial claims, as melting polar ice opens up the prospect of increased shipping and access to valuable natural resources.

Moscow, which controls about 50 per cent of the total Arctic coastline, has been stepping up efforts to develop the region, which could become another major source of gas supplies to China.

China’s cooperation with Russia has irked Washington, which sees the two nations as forming a united front to challenge its status.
The Pentagon said earlier this year that it was working on a strategy to “defend the US national interests and support security and stability in the Arctic”.

Russian President Vladimir Putin once described the Arctic as “the most important region that will provide the future of Russia”.

Last week he told the International Arctic Forum in St Petersburg that Russia plans to expand its Arctic ports and welcomes foreign investment to help it do so – a move widely seen as an effort to overcome the economic damage caused by Western sanctions imposed after its annexation of Crimea.

“The northern sea route is very effective in terms of distance, but the weak point is the lack of navigation operating facilities. We need to equip all the shoreline with special devices which can indicate how strong the ice is and other natural conditions,” Denisov said.

“We need icebreakers. Russia is a unique country which possesses quite a number of icebreakers and has a very well-calculated and proven programme for the construction of new icebreakers in recent years,” he said. “China has experience in building icebreakers and passing through the route too.”

Beijing started sending research and scientific expeditions to the Arctic in the 1990s and is the most powerful and significant newcomer to the region.

In recent years its interests there have become increasingly focused on shipping, trade and natural resources.

Moscow’s strained ties with the West have also opened the door to Chinese investors. At the same time, Russia’s role as a top energy supplier has been given a boost by Beijing’s war on pollution, which has seen China increase its reliance on gas as it moves away from coal.

Denisov said cooperation with China in the Arctic could be “long-distance and long-time”, and could include investment in navigation facilities as well as shipping and aircraft monitoring.

According to the Northern Sea Route Information Office, eight of the 27 vessels that travelled along the route last year were from the state-owned China Ocean Shipping Company.

Last July the Russian natural gas producer Novatek began to deliver liquefied natural gas (LNG) cargo to China.
Moscow’s ambitions in the Arctic as well as Beijing’s increasing role there have raised concerns from other Arctic countries as well as environmentalists.

Denisov admitted it was “quite natural” for concerns to be raised but tried to play them down.

“These are very big projects and of course there are different sides,” he said.

“But it is not a matter of whether concerns and worries do exist – that’s what we can discuss, whether we can put it on the table openly and find a solution. We don’t have any differences that cannot be settled.”