See the first image ever taken of a supermassive black hole 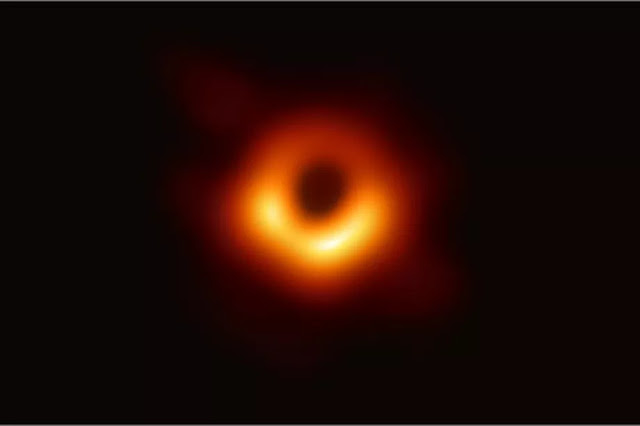 For the first time ever, humanity can gaze at an actual photograph of a supermassive black hole. It’s an achievement that took supercomputers, eight telescopes stationed on five continents, hundreds of researchers, and vast amounts of data to accomplish. The results from this project, called the Event Horizon Telescope. In addition to providing a picture that will quickly be incorporated into teaching materials, the results helped to confirm (again) Einstein’s theory of general relativity, and it gave astrophysicists an unprecedented close-up of these enigmatic, dense celestial phenomena.

The picture, a circular black shadow encircled by a bright orange ring, shows the black hole at the center of the huge galaxy Messier 87 (M87), which is located about 55 million light-years from Earth.

The black hole in this galaxy has a mass that the Event Horizon Telescope researchers estimate to be 6.5 billion times more massive than our Sun. “M87’s huge black hole mass makes it really a monster, even by supermassive black hole standards,” Sera Markoff, an astrophysicist at the University of Amsterdam, said at a press conference today. “You’re basically looking at a supermassive black hole that’s almost the size of our entire Solar System.”

In addition to being gargantuan, M87’s black hole was intriguing to researchers because of some other unique features. In some earlier pictures of the galaxy, they noticed a massive jet of plasma streaming out from its center. Scientists think that the jet is made of material that never quite made it into the event horizon of the black hole. Instead, their observations suggest that the movement of M87’s black hole (which researchers believe is spinning rapidly) accelerates nearby subatomic particles and sends them shooting out into the universe, a beacon to distant astronomers. 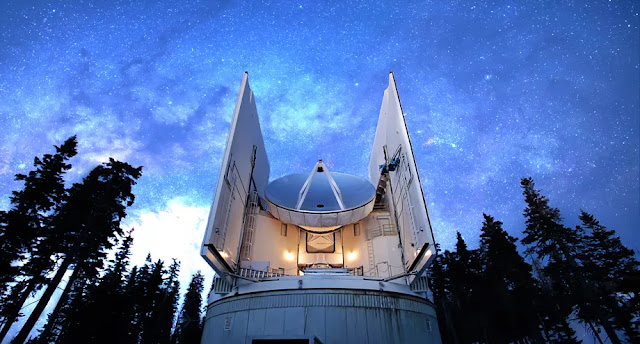 The Submillimeter Telescope (SMT) near Tucson, Arizona, is one of the eight telescopes involved in this discovery.

The Event Horizon Telescope is not a traditional telescope; rather, it refers to a group of eight radio telescopes that are stationed on five continents, which all observed the same areas of space over the course of one week in April 2017.

According to the Event Horizon Telescope, a conventional telescope would have to be approximately the size of Earth in order to take this particular snapshot of the black hole at the center of M87. “This is a picture you would have seen if you had eyes as big as the Earth and were observing in radio,” Dimitrios Psaltis, an Event Horizon Telescope project scientist at the University of Arizona, recently told The Verge. Individually, none of the telescopes measured up. But by coordinating their efforts, the researchers were able to zero in on M87, collecting massive amounts of data in the process.

While the observations took just one week in April 2017 to gather, actually sorting through the vast amounts of data took months. Just getting it all into one place was a huge challenge. Writing in Nature News in 2017, Davide Castelvecchi noted that a “typical night will yield about as much data as a year’s worth of experiments at the Large Hadron Collider outside Geneva, Switzerland.”

In the end, that data was the “equivalent to 5000 years of mp3 files” according to Dan Marrone, an astronomer and co-investigator of Event Horizon Telescope. It was recorded onto half a ton of hard drives and then physically sent to centralized locations where it was analyzed by supercomputers for months in order to get the image we see today.

Before this picture was released to the public, the image — and the data used to create it — went through one more step: a rigorous peer-review process, vetted by researchers in the field who were not part of the project. The project published in six papers today in The Astrophysical Journal Letters. It’s a first salvo in what will likely be many more articles and analyses to come.

Researchers with the Event Horizon Telescope project had four main scientific goals when they started this project. The first was simple: take a picture of a black hole. Check.

The researchers also wanted a chance to check Einstein’s work. The famous scientist’s theory of general relativity is over 100 years old, and it’s held up really well over the past century. He predicted the existence of gravitational waves long before humanity had the means to detect them, and his theory also predicted that the silhouette or “shadow” of a black hole would look circular. Based on the picture released today, it passed.


TODAY, THE THEORY OF GENERAL RELATIVITY HAS PASSED ANOTHER CRUCIAL TEST

“The Shadow exists. It is nearly circular, and the inferred mass matches estimates do the dynamics of stars 100,000 times farther away,” astrophysicist Avery Broderick said at the press conference. “Today, general relativity has passed another crucial test. This one spanning from horizons to the stars.”

The other two goals were more complicated. Researchers also wanted to understand more about how black holes grow and what makes material orbiting the black hole eventually fall in. The researchers hope that the answer to that might also explain why the material surrounding Sagittarius A* (the black hole at the center of our own galaxy) is unusually dim for material circling a supermassive black hole. They also wanted to get a better idea of why and how supermassive black holes at the center of some galaxies, like elliptical galaxy M87, seem to propel massive streams of subatomic particles out of the galaxy and into the broader universe. Those two research goals are still being explored by the scientists, but they’ve already gotten a lot of great insights.


“THESE BIZARRE SINKHOLES IN THE ACTUAL FABRIC OF SPACE-TIME.”

“Black holes may be the most exotic consequence of general relativity, but these bizarre sinkholes in the actual fabric of space-time turn out to have a lot of consequences on their own,” Markoff said. “Black holes are major disruptors of the cosmic order on the largest scales in the universe. And they’re actually helping mold the shape of galaxies and clusters of galaxies.”

Markoff explained that, thanks to the picture, the researchers can now accurately estimate the black hole’s mass, which ended up weighing in at a higher range than they’d previously thought. And they hope that once more data is released, it could give researchers insight into some of the forces that have shaped our Universe.

This is the first picture of a black hole ever taken, but, thrillingly, it likely won’t be the last. The researchers also focused on Sagittarius A*, a smaller, less active supermassive black hole at the center of our own galaxy. The data from that black hole is still being analyzed, but researchers like Markoff hope that by comparing the two, researchers can understand more about the life cycle of a black hole and how it influences its surroundings.

Already, researchers can tell that the two black holes are very different. “If [the black hole in M87] were a dormant black hole — like the supermassive black hole in the center of our own galaxy, Sagittarius A* — then the galaxy would really have no way of knowing it’s there, and would basically be just like a pebble in a shoe,” Markoff explained.


“BLACK HOLES TEMPORARILY BECOME THE MOST POWERFUL ENGINES IN THE UNIVERSE.”

But M87’s black hole is nothing like that. Instead, material is being actively captured by its gravity. “By gravitationally capturing material, it starts to convert that fuel into other forms of energy, with an efficiency that can be almost 100 times better than nuclear fusion that powers the stars like our Sun,” Markoff said. “In these active phases, black holes temporarily become the most powerful engines in the universe, and they go very quickly from being a pebble in the shoe to a thorn in the side of the galaxy.”

Researchers are still trying to understand the processes that can turn an annoying pebble into a dangerous thorn or vice versa. To get answers, we’ll just have to wait for the next glimpse into the densest, darkest places of our Universe.