Spider Venom Is What Gives This New Hot Sauce Its Kick 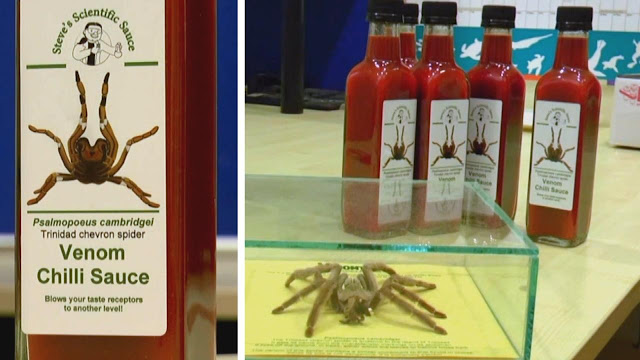 If you were ever curious about what spider venom tastes like, now's your chance. Scientists say they've found a way to safely extract the venom and bottle it into hot sauce.

“The pain signal I thought people would be really familiar with," scientist Steve Trim told SWNS. "And then I brought into the story that spiders such as the Trinidad chevron, they actually mimic the action of chili [peppers] in their venom.”

Trim invented Steve's Scientific Sauce, believed to be the first of its kind. The British scientist says it comes as close to actually tasting venom as possible without being harmful.

Trim and his team of scientists were able to accomplish this by extracting a component of spider venom they say is safe for human consumption.

"We get lots of feedback. People who really like chilis say well, it could be hotter but it's really warm and got good depth to it. Whereas people who are not familiar with chilis go, wow, that's hot. So we think we've got it about right."

It took 300 spiders for Trim and his team to get enough venom for the initial batch, which was 48 bottles. The hot sauce was so popular, it sold out.

Now, the scientists are mixing the hot sauce with mayo for a brand-new type of condiment.

"You get a really nice dipping sauce and that will be called Venomaise and that's the product we'll be launching later this year."

Trim said they are also looking into another product with bite they’re hoping to launch: venomous chili cheese bread.