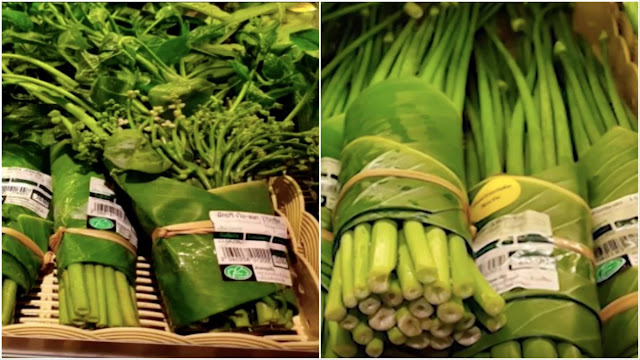 Last year, a report by Credit Suisse warned that there could be more plastic than fish in the ocean by 2050. Then in March, a dead whale washed up in the Philippines with 88 pounds of trash in its stomach. Both stories were breathlessly reported around the world, and served as a major wake up call about how plastic waste is literally choking our oceans. One of the most visible contributors to this mess is supermarket packaging. But Rimping supermarket in Chiangmai, Thailand has come up with a very natural alternative—banana leaves.

Facebook users lauded a recent post about how they’re subbing plastic wraps for leaves, and now other Vietnamese supermarkets are following in their steps. Lotte Mart in Ho Chi Minh City, Saigon Co.op, and Big C in Hanoi have all started experimenting with banana leaves as a packaging alternative.

A representative from the Lotte Mart chain told VnExpress that although they are still in the testing phase, they plan to replace plastic with leaves nationwide very soon. They also want to extend the practice to fresh meat products as well. Customer response has been positive. Hoa, a local customer, said: "When I see vegetables wrapped in these beautiful banana leaves I’m more willing to buy in larger quantities. I think this initiative will help locals be more aware of protecting the environment."

The leaves are in line with a slate of creative eco changes that stores are experimenting with to reduce plastic waste. Big C already offer biodegradable bags made with corn powder. These improvements are desperately needed: according to the United Nations Environment Programme, Vietnam ranks fourth globally in the amount of plastic waste dumped into the ocean, according to VN Express.

Around the world, there is a growing trend for banning and reducing single use plastic bags and packaging in supermarkets. At the start of the year, South Korea banned the use of disposable plastic bags. Supermarkets, shops, bakeries, and other commercial points need to provide recyclable containers, cloth or paper bags. In Singapore, supermarkets have launched campaigns to reduce plastic bag use in a series of roadshows and discount schemes. Taiwan, on the other hand, has started charging for single-use plastic bags.

China has lead the change though, banning the use of ultra-thin plastic bags in 2008. It’s estimated the country had avoided the use of 40 billion bags with this, and saw a 66 percent drop in plastic bag use.