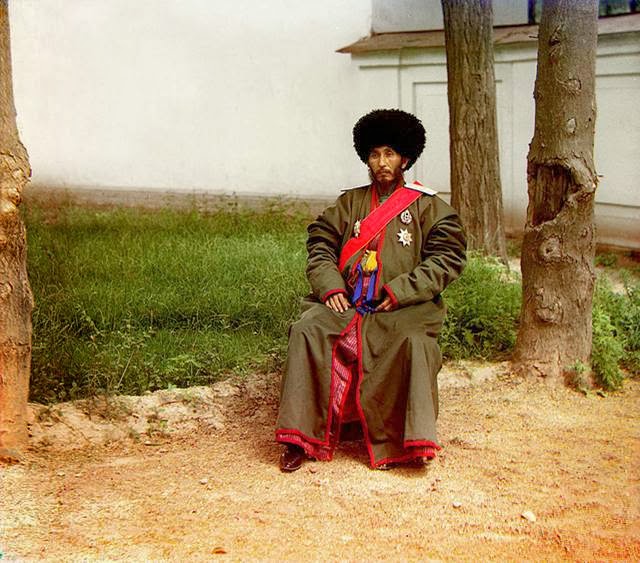 In 1909 a remarkable project was initiated by Russian photographer Sergey Mikhaylovich Prokudin-Gorsky. His mission was to record – in full and vibrant color – the vast and diverse Russian Empire. Here, with his story, is a selection of his amazing century old full color pictures. 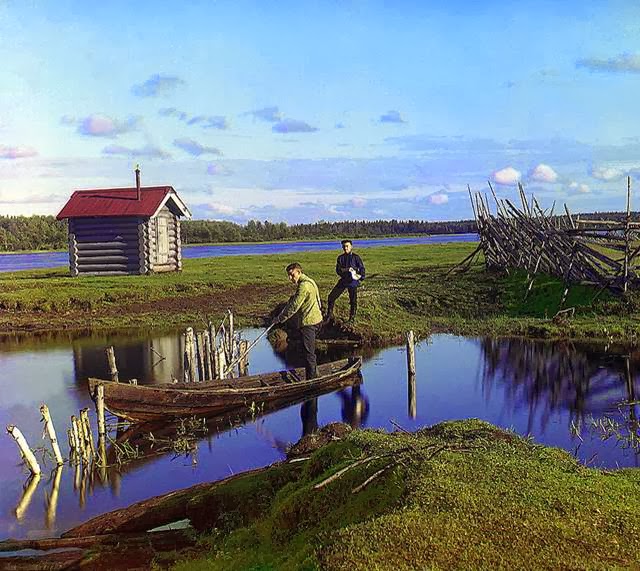 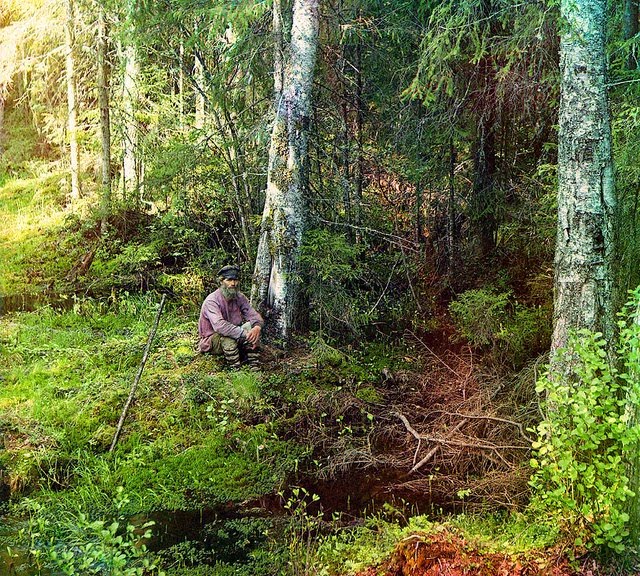 Just over one hundred years ago a Russian photographer, began a remarkable project. With the blessing – and funding – of the Tsar, Nicholas II, he embarked on an extraordinary journey to capture the essence of Russia in full color photographs. Many of these pictures look as if they could have been taken yesterday, with only the costumes worn by the people captured in their moment of time betraying the age of the work. The first shows two men crossing a small river. 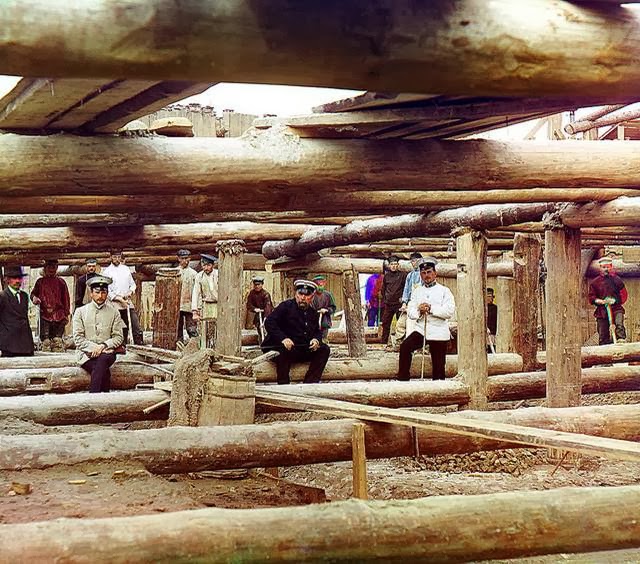 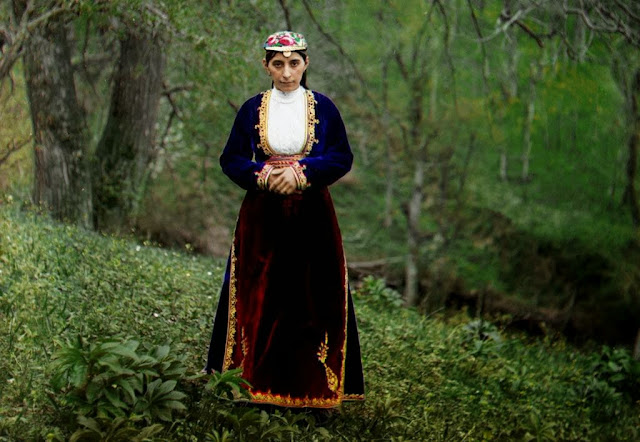 The colors are quite remarkable – a technique which Prokudin-Gorsky developed himself. However, his travels through the Russian Empire were never a fait accompli. They were the culmination of a long and arduous struggle. Thanks to the tenacity of the photographer we now have a record of times a century ago, so clear and vivid that one feels it is almost possible to jump in to the picture (which would no doubt astonish the subject of the photographs a much as it would disobey the laws of physics as we now know them). 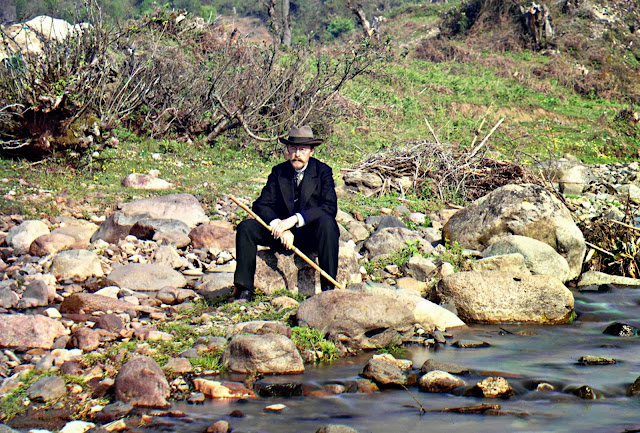 The past always comes alive with pictures, so perhaps it is appropriate to include at this point a picture of the man himself. This was taken somewhat later than his 1909 project, in 1915. The Great War had been raging for less than a year when this shot was taken. Looking like a thoughtful actor taking a break from shooting a period movie, the image shows a middle-aged man, lost in thought. He gives the appearance of a somewhat world weary fatigue and it is certainly true that this was not the easiest of eras in which to live. His world was undergoing rapid, bloody change which would culminate in revolution in his home country. What is going through his mind as this picture is taken can only be guessed at, but what a picture. 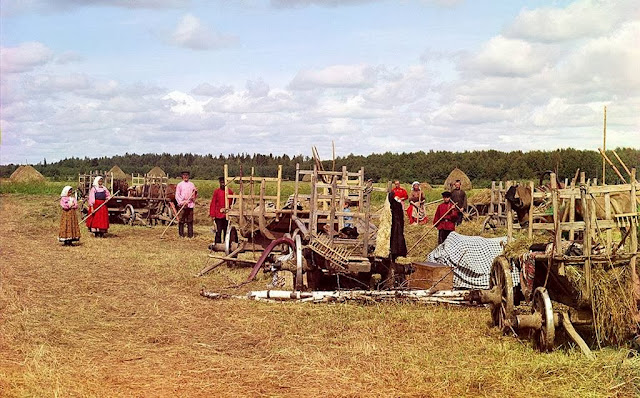 The audience with the Tsar was to herald a project which Prokudin-Gorsky came to regard as his life’s work and it is certainly a remarkable testament to the man and to the country of Russia. Above, the harvest of 1909 is collected. There is no evidence of the picture of any technology to aid in the bringing in of the harvest, at best the implements and carriages could be described as medieval. However, this way of life was coming to an end. Even after the October Revolution of 1917 which would mark the beginning of the age of Russian industrialization, Prokudin-Gorsky continued to create his record of this fast disappearing world. 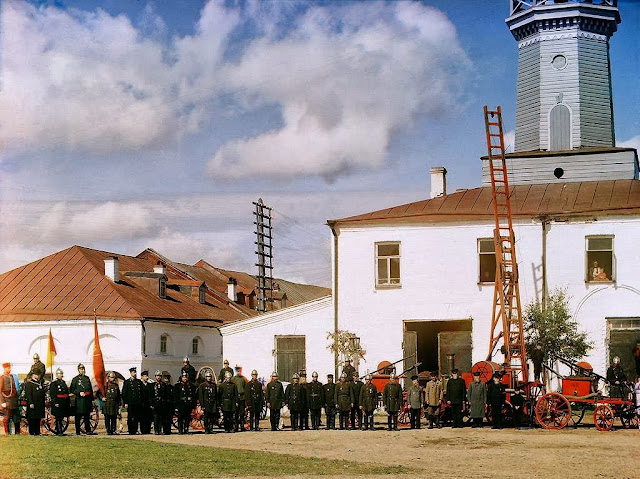 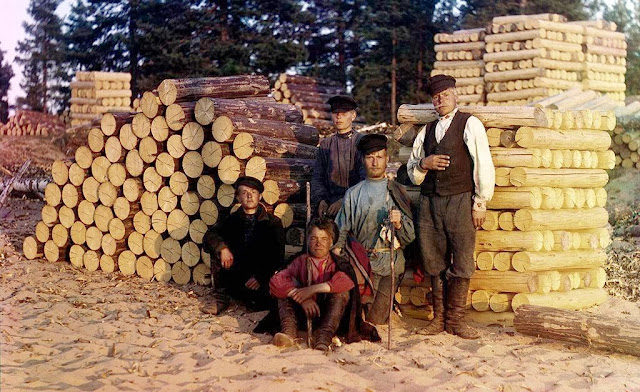 Prokudin-Gorsky came from a long line of Russian nobles who mostly enjoyed careers in the Russian army. Prokudin-Gorsky had a more cerebral bent and he studied chemistry in Saint Petersburg at the Institute of Technology in the city. He also studied painting and music at the Imperial Academy of Arts. Chemistry and the Arts may not immediately spring to mind as a happy marriage of subjects to many, but Prokudin-Gorsky’s interest in both would come together eventually. In 1889, at the age of twenty six he travelled to Berlin to study Photochemistry at the Technical University of the German capitol. There he met and studied under Adolf Miethe who was experimenting with three color photography. 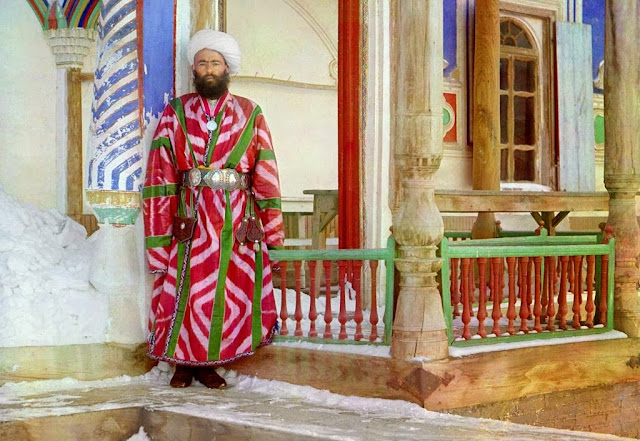 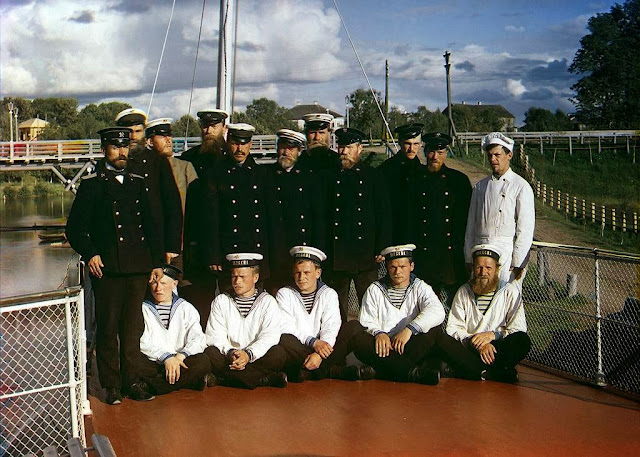 This started the long journey which would culminate in works such as the one above. Taken one hundred years ago, in 1909, it shows the Team of the Sheksna steamer. A combination of studied informality, this remarkable color shot shows the chain of command in all its glory. Were the youngest of the men pictured fifteen years old at the time he would now be the oldest man on the planet. 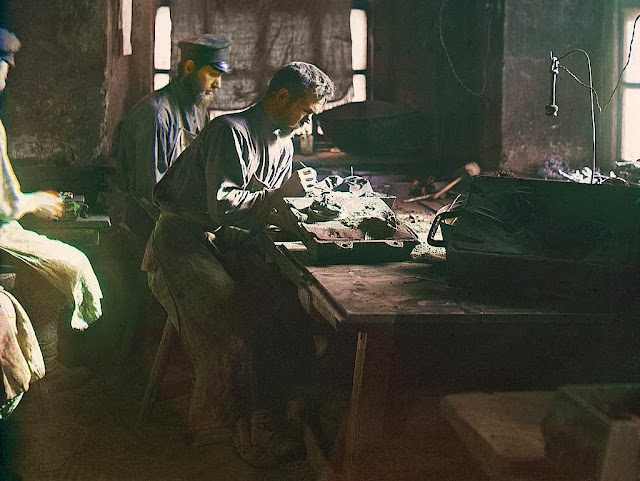 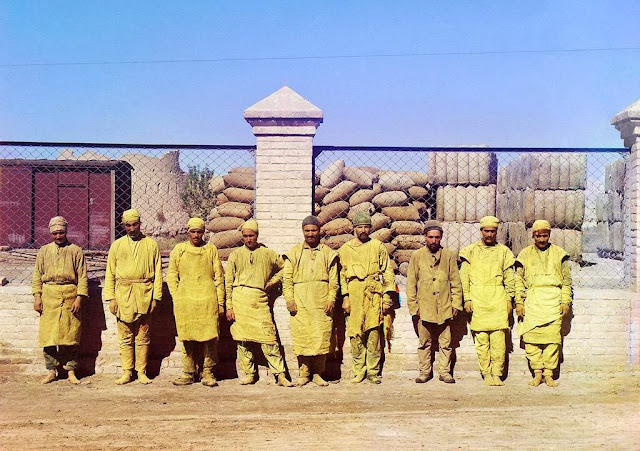 Marriage in 1890 produced two sons and a daughter. Prokudin-Gorsky’s wife was Anna Aleksandra Lavrova, the daughter of a wealthy industrialist who was a member of the Imperial Russian Technical Society (IRTS). Prokudin-Gorsky worked for his father in law at a metal works near St Petersburg, a position he held until the October Revolution and he joined the photographic section of the IRTS, Russia’s oldest photographic society. 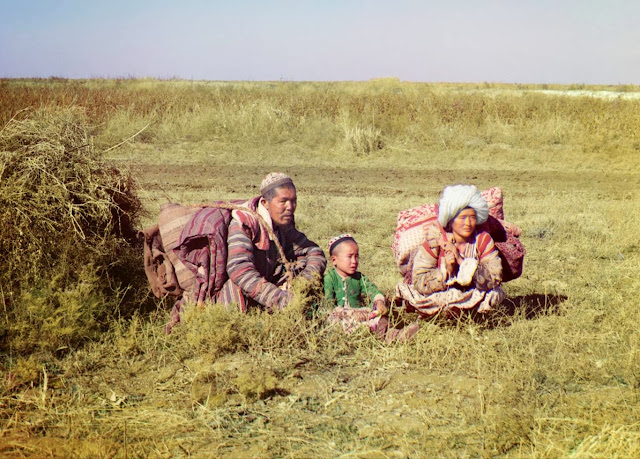 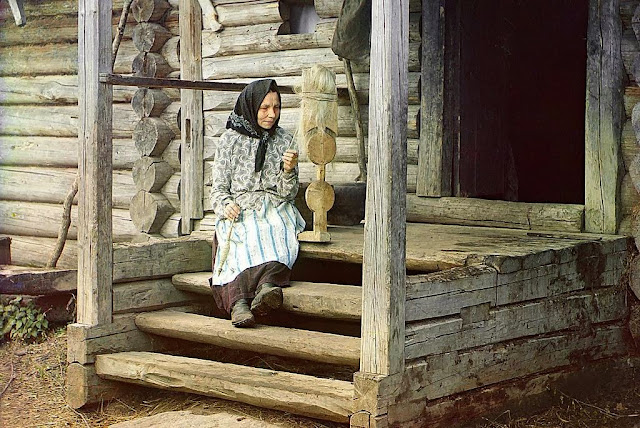 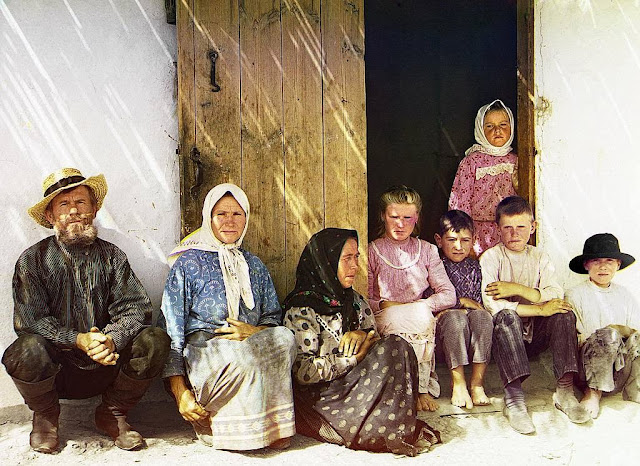 As well as the great and the good, Prokudin-Gorsky recorded the every day existence of ordinary people. These Murgan villagers could almost be a modern family in fancy dress for a day, except perhaps for the weathered features of the parents. However, this was taken the same year that the first prototype tank was tested by the British Army and Einstein had his first thought or two about relativity. 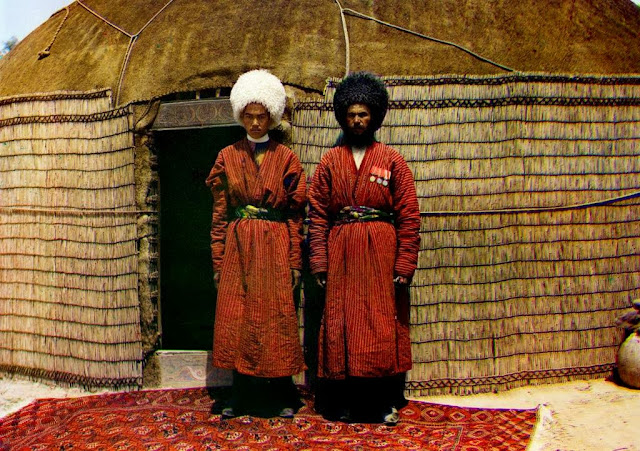 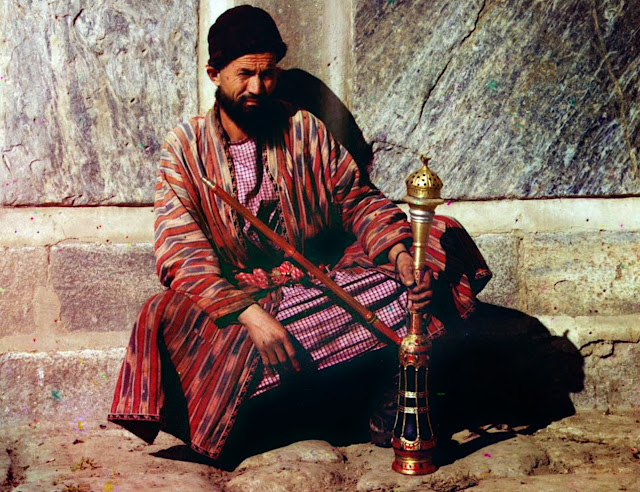 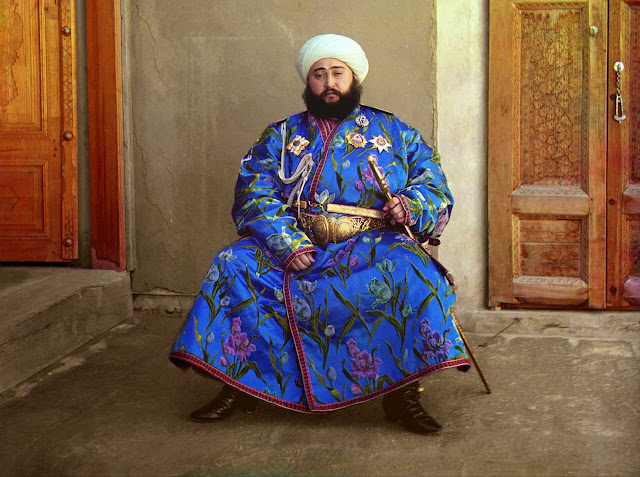 Russia was not just Russian when Prokudin-Gorsky took his pictures. Above is the Emir of Bukhara, in what is now modern day Uzbekistan, taken in 1910. The gorgeous colors of his robes indicate his importance. Prokudin-Gorsky died in 1944 in German occupied Paris. The times he had recorded, of the Tsar and his empire were long gone. However, he recorded for us and the world a time and a place and left behind a unique and wonderful archive that still astonishes the viewer today.