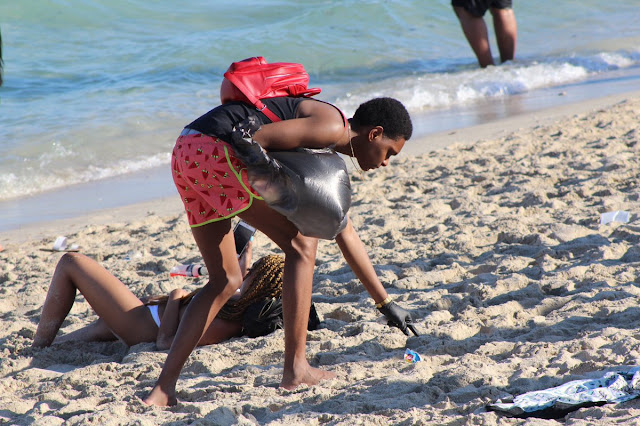 The 19-year-old was caught in the midst of an unconventional spring break activity.

For most college students in the United States, spring break plans are centered on parties, food, and sun tanning. That’s pretty much what 19-year-old Joshua Caraway had planned for his trip to Miami, Florida, until he saw trash-littered Miami Beach.

Clad in pink swim trunks and a black shirt, Caraway put on black gloves and got to work picking up trash instead of relaxing on the beach.

The college freshman, who is from Georgia, was spotted in the middle of his good deed by the local media outlet WSVN. And the photos of him voluntarily picking up garbage on a busy Saturday afternoon soon went viral.

“I love animals, I also love the environment,” Caraway told CTVNews.ca. “That’s why I like to help.”

A student at University of West Georgia, Caraway studies biology and intends to become an exotic animal specialist.

He had come to the popular spring break destination with friends, but when they showed no interest in joining his efforts, he decided to take on the mission of cleaning the beach alone. By the time, the local media channel approached him, he had already filled three plastic bags.

“I asked my friends if they were going to do it with me, and they were like, ‘Clean up the trash? No, I’m not with that,'” he told WSVN.

His efforts were also noticed by Miami Beach Police Department.

“So I told Joshua, you’ve been picking up trash for a long time instead of hanging out and listening to music,” police officer Paul Acosta wrote on Twitter. “I asked why. He says, he loves animals and wants to take care of their home and ours.”

The original post about Caraway’s selfless act has garnered more than 5,000 likes on Twitter. Many local residents also praised him in the comments.

Happening now: Meet Joshua from Atlanta (@boppay), he’s going through the Miami Beach crowds picking up trash. @MiamiBeachPD’s @PaulAcostaMBPD met with him to thank him for his efforts 👏🏼👏🏼 pic.twitter.com/3ypXQL7tHT
— Joel Franco (@OfficialJoelF) March 23, 2019

"What a simple and perfect example of a young person leading the way to improve a situation. Thank you Joshua for being a role model teen during #SpringBreakMiami. Another reason we must not generalize our youth with label," Alberto M. Carvalho, a superintendent of Miami Dade School, tweeted.

Caraway’s story was even shared by his role model, animal specialist Mike Holston — and the student was overjoyed.

My role model @Therealtarxann posted me on his insta story and this real has me in shock. I have a strong love for animals and plan to be a animal specialist as well. I look up to this man and for him to recognize me is just so cool .. this made my whole entire day pic.twitter.com/V4zd5u0Y4s
— josh 🧞‍♂️ (@boppay) March 24, 2019

Approximately 40% of college students in the US travel to destinations like Florida and Texas in March and April, according to ProjectKnow, which followed the hashtag #SpringBreak on Instagram to track popular spring break destinations. Among the top 10 cities were four Florida cities, including Orlando, Panama City, and Fort Lauderdale. Unsurprisingly, Miami topped the list.

Unfortunately, this also means an increase in bottles, cans, plastic, wrapper and all sorts of trash in public spaces. In 2016, the city of Miami launched the Keep Miami Beach Clean campaign during the spring break season to prevent its beautiful beaches from being flooded with trash.

"Students come for the beauty of the beaches and they want it to be like that every year, but they forget that if they leave trash and debris behind, it won't stay that way," Cecile Carson, vice president of litter and affiliate relations at Keep America Beautiful, told USA Today.