This Woman’s Twitter Thread About ‘Airplane Creeps’ Is Hugely Important 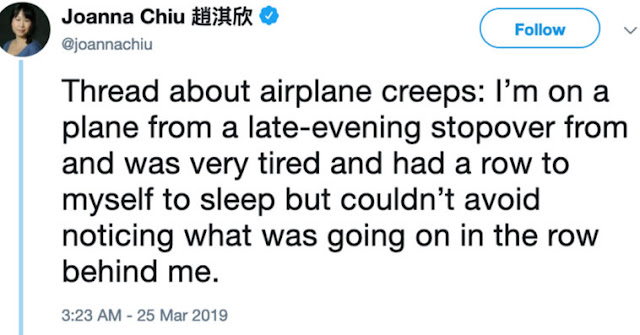 While we all too often (and often too late) hear stories about the lengths creepy men go to make women feel harassed and uncomfortable, it’s rare to hear from the individuals who notice these behaviors and go out of their way to intervene.

Journalist Joanna Chiu was one such individual. When she witnessed a man behaving inappropriately towards a young woman on an airplane, she stepped in and put an end to the harassment.

Chiu shared her experience in a since-viral Twitter thread, writing how the man, who was obviously significantly older than the young woman, engaged her in a conversation that turned predatory almost immediately.

Thread about airplane creeps: I’m on a plane from a late-evening stopover from and was very tired and had a row to myself to sleep but couldn’t avoid noticing what was going on in the row behind me.
— Joanna Chiu 趙淇欣 (@joannachiu) March 25, 2019

The journalist detailed how the man laughed at the teenager and “kept giving her ridiculous advice” when she told him she wanted to be CEO. 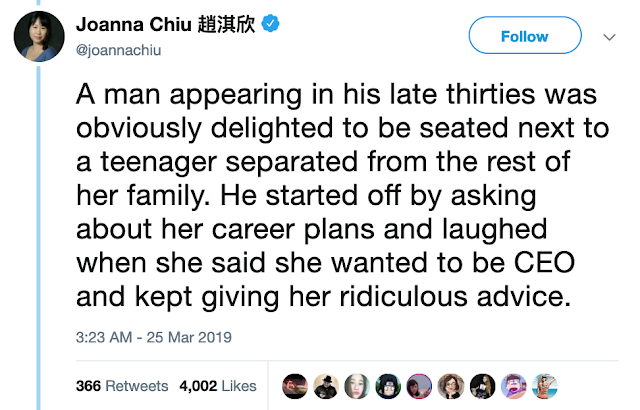 As is unfortunately the case in many situations, the man took the young woman’s friendliness as a sign to not only continue the conversation but to tease and ask her out on a date. 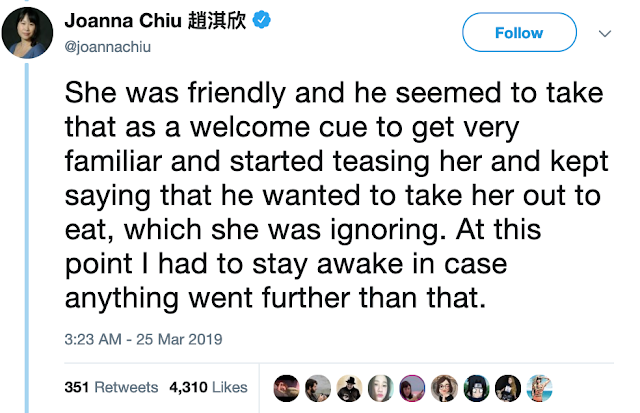 The man then asked the girl for a “dirty photo”—even though she had started ignoring him after he continued to ask her to dinner. This was when Chiu intervened to tell the man “exactly what I thought of that.” 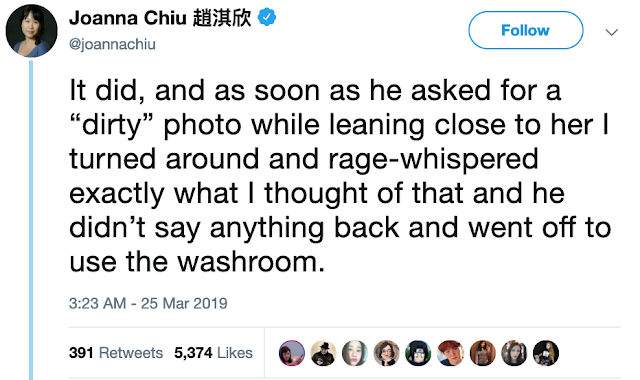 There was another woman paying attention to the interaction and together, the pair alerted a flight attendant to the situation. 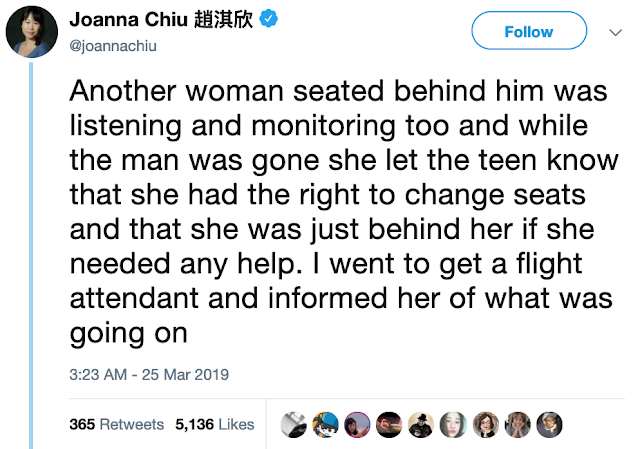 When other witnesses corroborated the womens’ accounts, the head flight attendant asked the man to move. She threatened to land the plane when he resisted and began to swear. 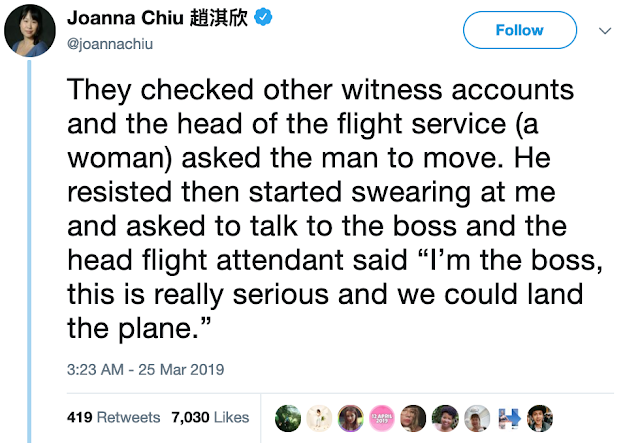 Chiu praised the airline and its staff for their handling of the situation. 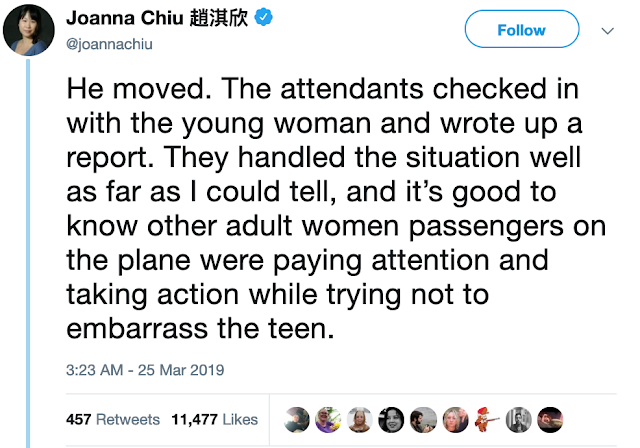 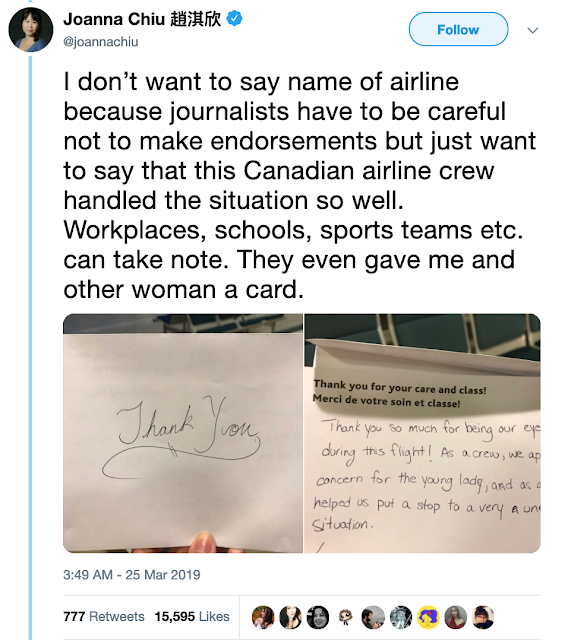 And shared the cards they’d been given by the airline for going out of their way to intervene. 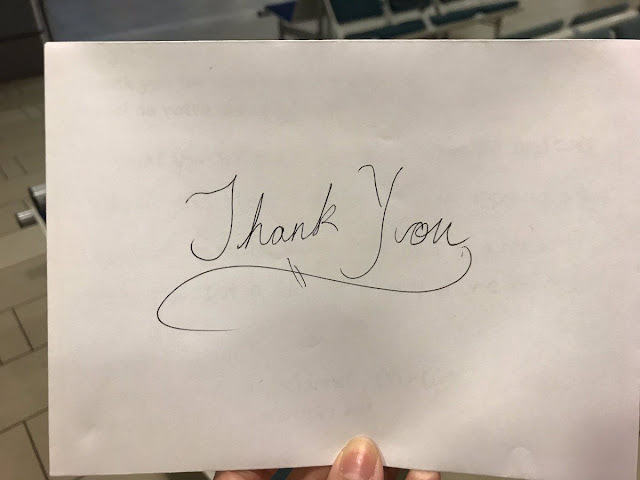 “Thank you so much for being our eyes and ears during this flight!” reads the note. “As a crew, we appreciate your convcern for the young lady, and as a result helped us put a stop to a very uncomfortable situation.” 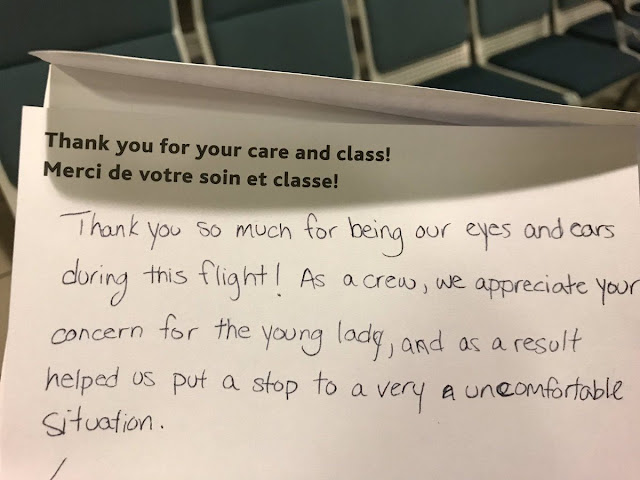 But, more notably, Chiu was struck by the fact that “none of the male passengers” noticed what was going on. She admits this might be due to the fact that women are more attuned to sexual harassment because they are subjected to it so much more often throughout their lives 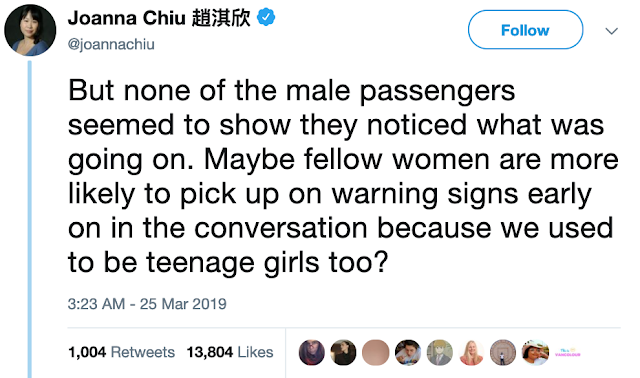 She even shared her own “airplane creep” stories. 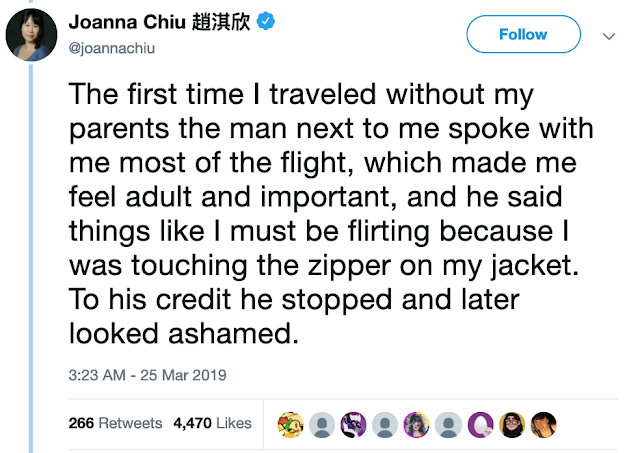 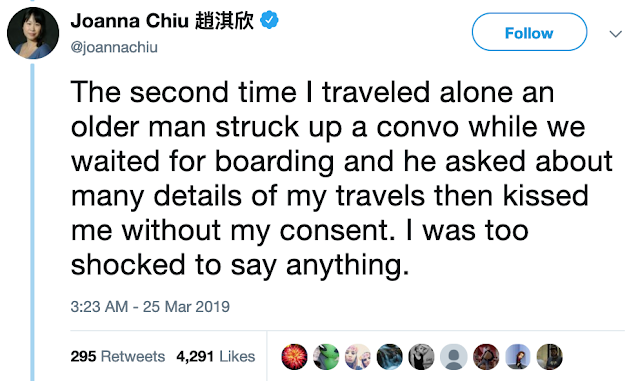 While men may not be as attuned to women in situations where other men are harassing women, Chiu says it is their responsibility to figure out how to intervene and how to “spot creeps” so they too can stop sexual assault—especially in instances where women physically cannot get away. 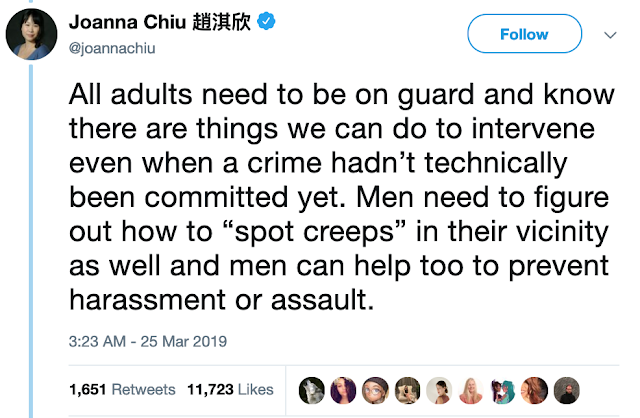 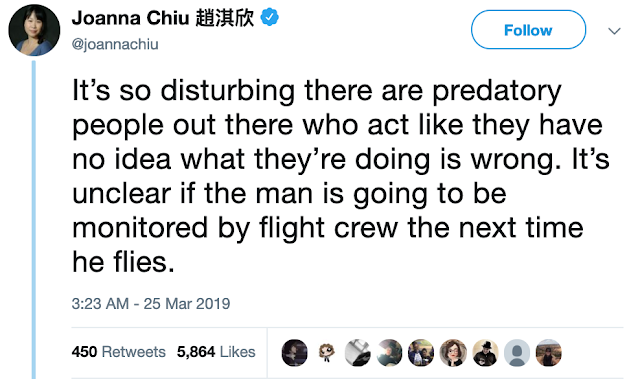 The story has a happy ending: Security was waiting for the creep when the plane landed, and Chiu promised that she’d be reaching out to his company to let them know of his behavior.

Chiu concluded her thread by recommending Jessica Valenti‘s book ‘Sex Object: A Memoir,’ before sharing resources and tips about how to intervene safely in public spaces.

I’m sure the young woman he targeted will be CEO someday or some other position of influence. She was in the middle of studying when he started harassing her. It’s sad these experiences are extremely common. Recommend @JessicaValenti’s memoir for insights: https://t.co/572fVfvNvd
— Joanna Chiu 趙淇欣 (@joannachiu) March 25, 2019

List of examples and tips on how to intervene (can be subtle like interrupting and asking for the time or just moving closer to show you’re watching if you’re unsure if something is harassment): https://t.co/4c36Lr35bv
— Joanna Chiu 趙淇欣 (@joannachiu) March 25, 2019

Hopefully Joanna Chiu’s Twitter thread taught more folks about the importance (and ease!) of bystander intervention, and hopefully more men will be on the lookout for predatory behavior now that they see how often it occurs.