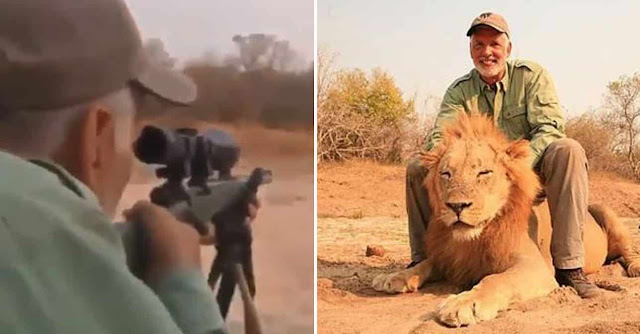 It goes without saying that trophy hunters are ridiculously cowardly and evil people that somehow get a sick thrill out of seeing a beautiful creature dead.

There is absolutely no skill in it, nor is there any glory; the arbitrary killing of another animal in the name of ‘sport’ or ‘hunting’ should be condemned by absolutely everyone and there should be a heavy, heavy fine on anyone caught doing it.

When I say ‘fine’ I actually mean you should put the perpetrators out in the wild to fend for themselves. Let’s see how long they last.

I say this because I’m absolutely appalled about the following footage which has been doing the rounds online lately, showing an American hunter creeping up on a sleeping lion in Zimbabwe and shooting it.

It will make your blood boil. If you want to watch it you can do below:

This 'hunter' sneaked up on a SLEEPING #Lion and killed it!

How brave, how sporting - HOW CUNTISH!!!

According to the @NatGeo
magazine, the Lion will have disappeared from the African continent in 2050!!!! RT if you want a GLOBAL ban on ALL #trophyhunting NOW!! @RickyGervais pic.twitter.com/F5qcOpE0ix
— PROTECT ALL WILDLIFE (@Protect_Wldlife) March 18, 2019

Although the actual footage is from 2011, the hunter has now been identified as 64 year-old maggot Guy Gorney.

Guy Gorney has killed animals for sport as a hobby before, boasting he has killed at least 70 big game animals as well as posing with a dead rhino, elephant and hippo in pictures posted online. He told CBS in 2015 that he had “no remorse”, adding:

“I have a hard time understanding, if you have a picture of somebody with a deer, nobody seems to care. But if it’s an elephant, it’s a big problem. If it’s a lion – especially now – it’s a huge problem.

“But to me, either way, I’ve stopped a beating heart.”

He was definitely bullied as a kid/has the world’s smallest d*ck.

The COWARD who shot a sleeping 'Lion in Zimbabwe has been revealed as remorseless #trophyhunter Guy Gorney, from Illinois. He was was branded a "scumbag" on social media, when footage released by @Protect_Wldlife showing him shooting the lion in Zimbabwe caused an online storm! pic.twitter.com/hDLxSWlvaU
— PROTECT ALL WILDLIFE (@Protect_Wldlife) March 20, 2019

The footage has sparked mass outrage since it went viral, with people commenting that they would love for the trophy hunter to suffer the same fate as the poor lion. Seems fair.

What a pair of gutless creeps. The South African guide is the murderer the shooter is a mindless dumbfuck. How more disgusting can you get. Murdering a sleeping lion and then congratulating each other..it's money and no humanity, these people stink.
— Peter Egan (@PeterEgan6) March 18, 2019

Oh what an SOB...what is wrong with these flipping people? What is the thrill about taking a life? Especially a life that is sleeping and not harming YOU or any loved one of yours? I so wish they could get this global ban on trophy hunting done NOW!
— Allyssa_n_me (@allyssa_me) March 18, 2019

“No words for what this evil b*****d gets up to. Let’s hope karma catches up with him – he really deserves the worst.”

Africa’s lion populations have plummeted in recent years, though, with estimates that there could be as few as 15,000 left and be extinct in North Africa by 2050.

What an absolutely gut-wrenching thought that is.

Humans really are a cancer on this planet, aren’t they? I know there’s a lot of good that happens in the world too but it just beggars belief that people can be this cruel.