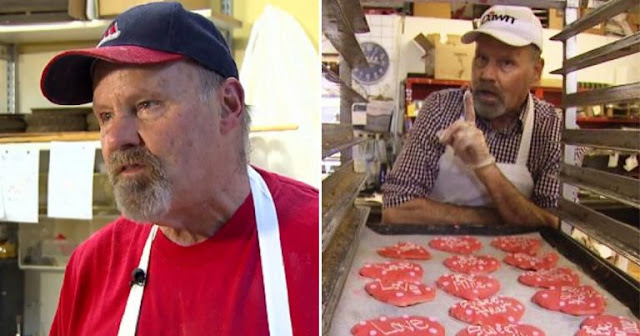 Baker Ken Bellingham, who was attacked on social media for selling one Valentine’s cookie with the message “Build the Wall” written upon it, is fighting back the American way.

He’s putting them back on sale.

“The ‘phone messages saved’ has like 40-or-50 messages that I can’t even respond to from people all over the country wanting me to ship them cookies,” the Edmonds, Washington, baker told KOMO.

After one critic’s Facebook comments launched a social media deluge of criticism aimed at him, Bellingham apologized for what he said was a joke. He said he is now “unapologizing.”

“Am I supposed to be quiet because I can’t write what I want, or I can only write what they want or makes them happy? No. That’s not how it is.

“They can write whatever they want on their own cookie and I can do that on mine,” he told the station, adding that he has a First Amendment right to say what he pleased.

His very first “Build the Wall” cookie was an inspiration after he was tired of putting “Nice Butt” and other such sayings on heart-shaped cookies he makes for the Valentine’s Day season.

“Because of the government shutdown all you heard was ‘build that wall.’ I unwittingly wrote that on a cookie because a lot of people support that. I was back there trying to think of things to put on cookies. My daughter-in-law is a Trumper. I did it with her in mind. And then it got put in the case,” he said.

Patron Ana Carrera, a nanny, had gone to the bakery with the children she watches. Carrera, who said her parents were from Mexico, said she was offended.

“It is very demonizing to anyone of the Spanish-speaking language or origin,” she said, according to The Everett Daily Herald.

“One of the staff tried defending by saying it was meant as a joke. There’s nothing funny about racism or racist ideals + policies,” she posted.

Nothing was the same for Bellingham after that.

And his character has been trashed.

“They called me a racist. They don’t even know me. I take trips to Mexico twice a year on a mission with my church. We go to an orphanage in Tijuana. We do work for them. We play with the kids. One of the days we go out into the little villages and pick up their garbage … I know firsthand what it’s like down there,” he told The Daily Herald.