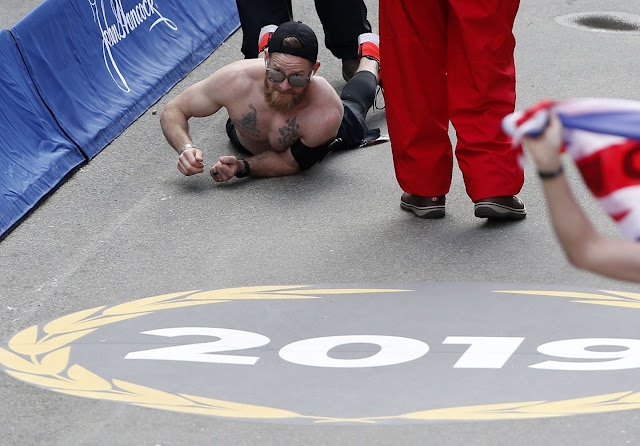 Micah Herndon crawled down Boylston Street towards the Finish Line.

The image of the Marine veteran crawling across the Boston Marathon finish line quickly became one of the most memorable — and talked about — moments of this year’s race.

Micah Herndon, 31, of Tallmadge, Ohio, may not have been prepared for the attention he received when he crossed the finish line on his hands and knees, determined to complete the race in honor of his fallen comrades.

Video footage of Herndon’s emotional finish went viral on social media, and the story was picked up by major media outlets, including CNN, The Washington Post, USA Today, and Sports Illustrated.

Herndon captured the hearts of spectators when he crossed the finish line on Boylston Street on his hands and knees, completing the 26.2-mile course in 3 hours and 38 minutes.

The Record-Courier in Kent, Ohio, reported that Herndon carries the memory of three fallen comrades — fellow Marines Matthew Ballard and Mark Juarez, and British journalist Rupert Hamer — whenever he runs.

Herndon told the Record-Courier that he was riding in a convoy with Hamer, Ballard, and Juarez in Afghanistan in January 2010 when the vehicle the three men were riding in was blown up by an IED. Hamer and Juarez were killed in the blast and Ballard suffered serious injuries.

“I run in honor of them,” Herndon said. “They are not here anymore. I am here, and I am able. I am lucky to still have all my limbs. I can still be active. I find fuel in the simple idea that I can run. Some cannot.” 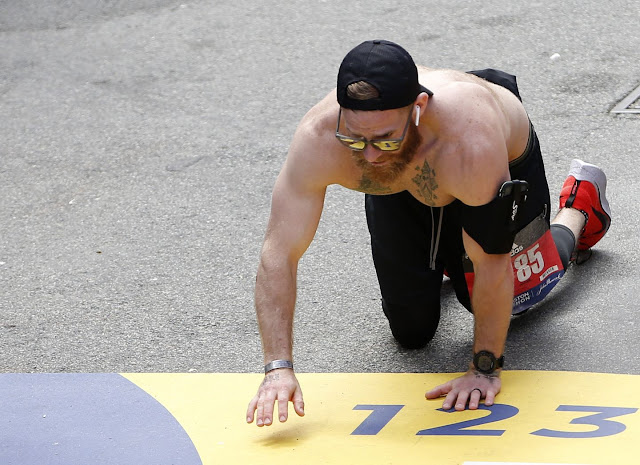 Micah Herndon at the finis line.

After finishing the Marathon on Monday, Herndon told WBZ-TV how the memory of his friends kept him going.

Herndon told WBZ-TV that he was determined to finish the race, no matter what.

“The pain that I was going through is nothing compared to the pain that they went through,” Herndon said.