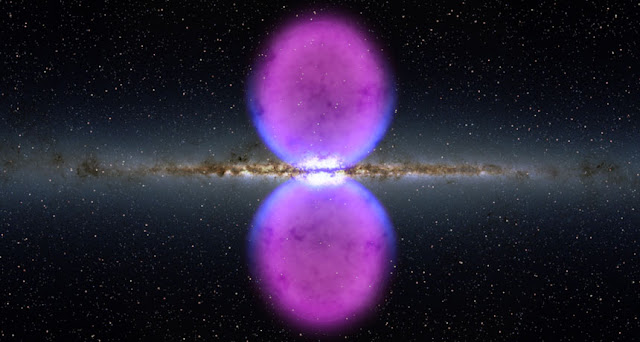 Two towering “chimneys” glowing with X-rays extend from the center of the Milky Way. The newly discovered structures could help explain the source of two even larger features: giant bubbles that emit gamma rays, or high-energy light, found above and below the plane of the galaxy.

Stretching hundreds of light-years, the X-ray chimneys seem to connect the gamma-ray bubbles to the center of the galaxy, scientists report in the March 21 Nature. “This is really interesting, and it could potentially tell us quite a lot about the origin of the gamma-ray bubbles,” says astrophysicist Tracy Slatyer of MIT. Slatyer was part of the team that discovered the bubbles but was not involved in the new study.

New observations with the European Space Agency's XMM-Newton satellite uncovered the chimneys. The researchers “have done a fantastic job to demonstrate these very distinct features,” says astronomer Daniel Wang of the University of Massachusetts Amherst. Previously, hints of such structures have been found using Japan’s Suzaku X-ray satellite, he says.

The chimneys, which are each about 300 light-years wide, could be funneling energy from the galaxy’s center to the gamma-ray bubbles, says astronomer Mark Morris of UCLA, a coauthor of the new study. “One way of looking at it is they are exhaust vents,” through which energy escapes.

Each gamma-ray bubble is itself the size of a small galaxy, and the source of the spheres’ energetic light has been a mystery since their discovery in 2010 (SN: 12/4/10, p. 18). Producing gamma rays requires highly energetic particles, which could be belched out by exploding stars, for example, or by the supermassive black hole at the heart of the galaxy as it slurps up matter and rips apart stars.

The discovery of the chimneys doesn’t definitively pinpoint such a source. But it draws a clearer connection between the galaxy’s center and the bubbles, says astrophysicist Jun-Hui Zhao of the Harvard-Smithsonian Center for Astrophysics. “This is very important to find this piece of the puzzle,” he says.