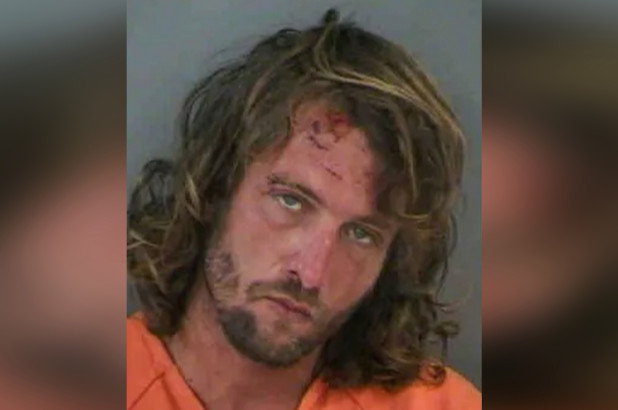 A shirtless alleged drunk was arrested outside a Naples, Fla., Olive Garden last week after customers complained he was sitting on a bench and shoving handfuls of pasta into his mouth.

Ben Padgett, 32, was charged last Sunday with disorderly intoxication and resisting an officer, according to a police report obtained by the Miami Herald.

His erratic behavior first reached the boiling point when he threatened to beat up an employee — who he’d bizarrely asked whether “he had male or female sex organs,” cops alleged.

Once outside, Padgett allegedly began “muttering obscenities” and begging for change — all in between handfuls of pasta.

Arriving cops gave the pasta-eating panhandler paper towels to clean his hands and face before cuffing him, the Herald said.

He allegedly had one last outburst in the back of the patrol car, when he injured himself by banging his head against the metal cage partition.

Padgett was treated for a bloody forehead at a nearby hospital, then released on $2,000 bond.