Meteor filmed soaring in the sky was size of a 'small car' when it hit the atmosphere, NASA says 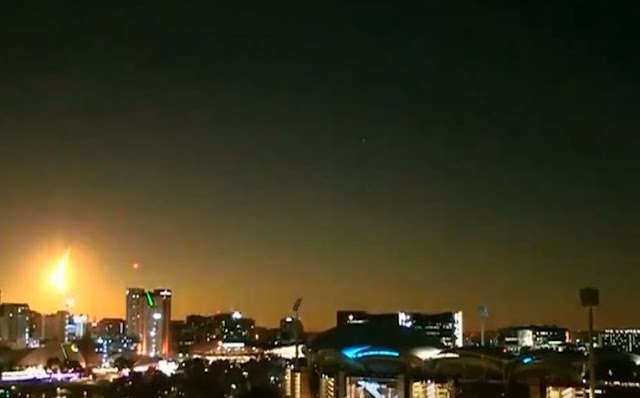 A meteor that soared across the Australian sky on Tuesday night was the size of a "small car" when it hit the Earth's atmosphere, according to an expert from NASA.

Footage of the "fireball" crashing towards the ground flooded social media on Wednesday with sightings of the phenomenon coming in from across both South Australia and Victoria.

It followed another meteor sighting that lit up the sky and shook windows near Alice Springs in the Northern Territory earlier this week.

He estimated it would have weighed between 20 to 40 tonnes and would have been about the size of a four-wheel drive.

He said it was also travelling at about 40,000 kilometres per hour and had an explosive yield of about 1.6 kilotons.

Caught on Camera: a meteor streaking across the sky in Adelaide, Australia, shortly before midnight on Tuesday night.
Duck and Cover!#Meteor pic.twitter.com/OoaSCLlAtw
— ~Marietta (@MariettaDaviz) May 23, 2019


"When you think of the Hiroshima nuclear bomb, that was 15 kilotons, so the South Australian fireball was 10 per cent the explosive yield of Hiroshima," he told the ABC.

"In the four years that I've been running the Australian Meteor Report site, this is the biggest event we've seen."

A spokesperson from Geoscience Australia said data had shown the estimated landing site was close to the border of South Australia and Victoria.

"The meteor on Tuesday night was observed travelling through the atmosphere quite close to the SA/Victoria border by our infrasound array near Hobart, as well as at a second infrasound array in New Caledonia," a Geoscience Australia spokesperson said.

"The meteor location is about 400km south of Adelaide [offshore]."

Mr Finlay said while the meteor would have broken up into fragments, he believed it would have been dangerous if its fragments had landed in a populated area. 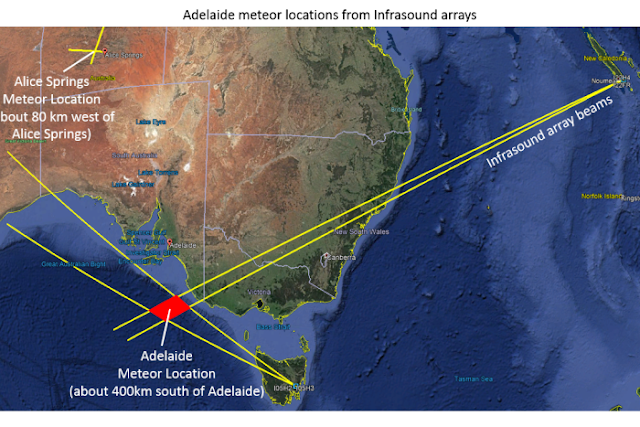 "We're estimating that around 3 to 4 tonnes would have survived atmospheric entry," he said.


"If this was over Adelaide, you would be looking at fatalities … I'm not trying to be alarmist here, that's just the reality of it.

"If it was over a populated area we would essentially be looking for holes in roofs and cars."

Meteor recorded by NASA experts
Despite the claims of its estimated size, Dr Steve Chesley from NASA's jet propulsion laboratory, based in California, said this particular meteor was pretty small by NASA's standards.

He said he believed it would have been the size of a small car and objects of this size would hit the atmosphere about three to six times a year around the world.

"When these things hit the atmosphere going so fast, the pressure from these hypersonic entries basically causes them to shatter and fragment," Dr Chesley told ABC Radio Adelaide.


"There are likely [to be] some small pieces — maybe the size of a fist or perhaps larger — you wouldn't want it to land on your head."

Dr Chesley said while the meteor would have created a spectacular light show, it was actually travelling on the slower end of the scale.

"This object almost certainly, tens of millions of years ago, started out in the main asteroid belt out beyond Mars, between Mars and Jupiter," he said.

"The slowest velocity you can get is about 11 kilometres per second and we have cases of upwards of 35 [kps] and higher.

"This one was [travelling] at about 11.5 kps, which suggests it was probably on an orbit very similar to that of the Earth."