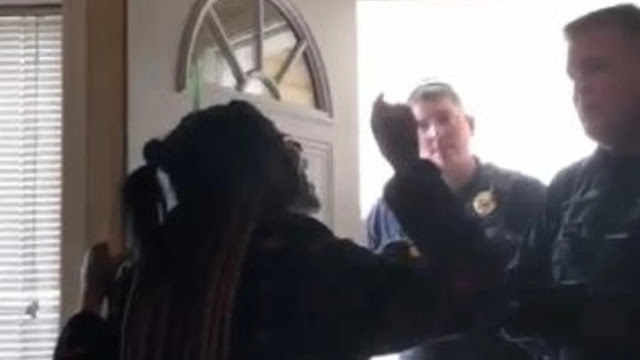 Knowledge is power, and clearly, Angela Whitehead of Billings, Montana has plenty of both.

Ms. Whitehead was minding her business in her own home, doing whatever it is she felt like, because it’s the privacy of her own home and she’s entitled to peace of mind and security. But when cops barged into her home through an open door, without warrant, and tried to make her business their business, they weren’t prepared for the wrath of Educated Black Womanhood.

The beginning of the tape
Billings officer walks into this sisters home without permission and she forces them pic.twitter.com/DPsrXoktc9
— Brother Tyrone X (@tyrone345345) May 2, 2019

With cellphone cameras rolling Whitehead explains she did not give the officer permission to enter, nor do they have a warrant.

“We heard an argument,” the officer replies.

“We had an argument,” the man recording on the couch (presumably Kevin) says.

Whitehead cuts Kevin off from explaining anything further, and continues to confront the officers, “No. Because this is my home. And this is my property. And I’m telling you to leave my home,” she says. “There’s nothing going on here, and you are violating my rights, sweetheart.”

Instead of simply leaving, the officers violate the woman’s rights by remaining in her home, now claiming they “got a call about an argument”.

“I don’t care what you got,” Angela yells. “Because if I hadn’t just stepped outside to smoke a cigarette, this door would have been closed and your ass would have had to knock…I don’t care what he talking about this is my house. I pay these bills. Are you crazy?...Now tell me that I’m fuckin’ wrong; you can’t… You do not come in my home without permission. Period.”

The video has been viewed over two million times on Twitter as of Sunday, and Black Twitter has been showering the woman with praise for holding down her house:

Me every time she said I know my rights, and corroborated it pic.twitter.com/J7vuWxuDhw
— 𝖙𝖊𝖈𝖍𝖘𝖔𝖑𝖔 (@diastemaderrick) May 3, 2019

Whitehead is later heard in the video saying, “I’m screaming because you’re in my space; this is my home, this is where my kids live, how I know you wasn’t coming up in here with a fuckin’ gun, Black People Killer? How do I know that? I don’t! So guess what, I’m aggressive. I’m being hostile, like you guys call us, because you done came up in my home!”

“Go get my lease from downstairs,” she instructs before turning her rage back to the police,“ Like I don’t know my rights…you got the wrong Black Girl on the right day, baby – what do you want!”

After being thoroughly cursed out, shut up, and put down, the cops finally realized they couldn’t handle that Whitehead smoke; so they left before Kevin came back with the lease papers.

“And don’t ever do that again, thank youuu,” Angela sang sweetly as she closed the door to her house; the icing on the colonizer-killer cake.