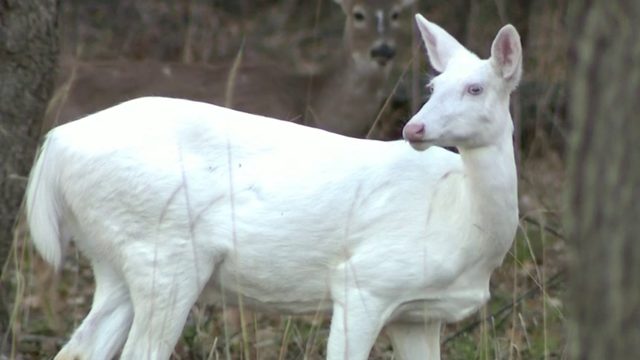 It’s stopping traffic. “We were coming back from our bike ride and we wondered what all the people were stopping for,” said Sheila Lloyd.

It’s leaving people in awe, “First time, I ever seen one, and what a wonderful sight. It’s just beautiful,” said Lloyd.

It’s something, no one has seen before, especially up close and personal, “To be so close, it’s just really wonderful to see that,” said Lloyd.

We’re talking about the one of a kind Albino Deer. It’s tucked deep into the Kensington Metro Park. Russell Rheaume was one of the first ones to capture the rare, all white deer.

“I snapped a whole bunch of pictures and I got everybody but him, except on one," Rheaume said. "I was so lucky to get him."

The numbers vary when it comes to just how rare it is to see an Albino Deer, but according to Pure Michigan, your chances of seeing one in the wild are about 1 in 30,000.

According to the Michigan Department of Natural Resources, it was illegal to hunt the Albino Deer, but that law changed in 2008, that’s because hunters claim it is difficult to determine if a deer is all white, Albino or Pie Bald from a distance.