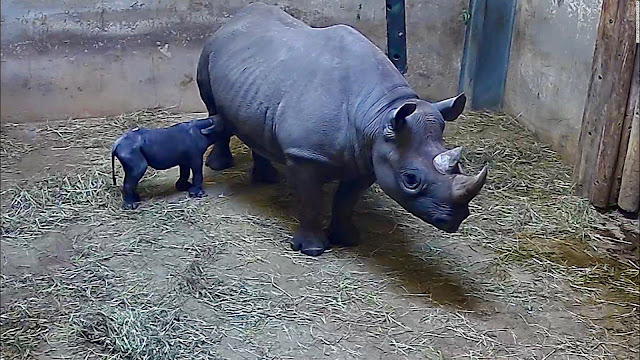 A critically endangered eastern black rhinoceros gave birth to a calf following a 15-month pregnancy at a Chicago zoo on Sunday, officials said.

The calf stood up within an hour of its birth, an important milestone, according to the Lincoln Park Zoo. The newborn was also seen nursing from its 13-year-old mother, Kapuki, several times, a second major milestone, officials said.

The first 48 hours of a calf’s life are considered “critical,” but the zoo said it's “cautiously optimistic” as it continues to remotely monitor the newborn. Veterinary staff haven't engaged the pair and were unable to confirm the gender of the calf or immediately give it a name.

The species, native to Africa, is critically endangered in the wild due to poaching. There are fewer than 5,500 black rhinos in the world and all of them are located in Africa, according to Save the Rhino.

The International Rhino Foundation estimates that in 1970 there were as many as 65,000 black rhinos in Africa. In 1993, only about 2,300 were surviving in the wild—the most drastic decline of all rhino species in total numbers.


While the population has seen a slight rebound, conservationists in Africa have been working hard to protect the black rhino sub-species from poachers targeting them for their horns to supply an illegal Asian market.

In addition to poaching, the animals are also extremely threatened by habitat loss.