No Comments
Last year, the U.S. Geological Survey shared an incredible image of a giant lava bubble in Hawaii. However, the photo was taken nearly a half century ago, on Oct. 11, 1969.

The agency posted the photo to participate in the viral “Throwback Thursday” internet tradition, where people like to share old photos from their past.

The incredible lava bubble was reportedly 65 feet tall and originated at the Kilauea Volcano, one of the most active volcanoes on Earth.

This dome developed during the eruption of Mauna Ulu, which is a volcanic cone in the eastern rift zone of the  Kīlauea volcano. 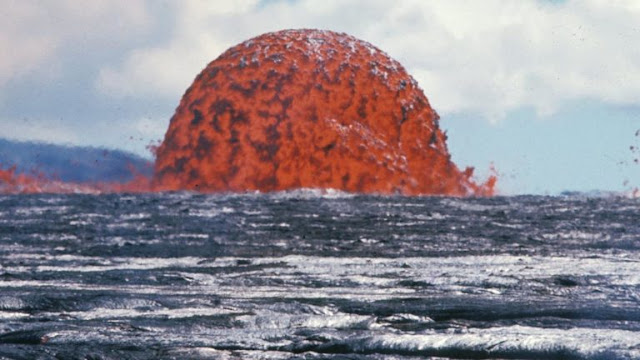 According to the Hawaii Center for Volcanology, this site has been in an almost constant state of eruption since 1983.

Over that time period, a shocking 350 million cubic meters of lava was produced, which is enough to fill “140,000 Olympic-size swimming pools,” according to LiveScience.

The Kīlauea volcano is located along the southeastern shore of Hawaii. The volcano is between 210,000 and 280,000 years old and emerged above sea level about 100,000 years ago.

In 2018, the United States Geological Survey National Volcanic Threat Assessment gave Kīlauea an overall threat score of 263, and ranked it first among volcanoes in the United States most likely to threaten lives and infrastructure.

Only about 6% of volcano eruptions on earth end up forming lava domes. 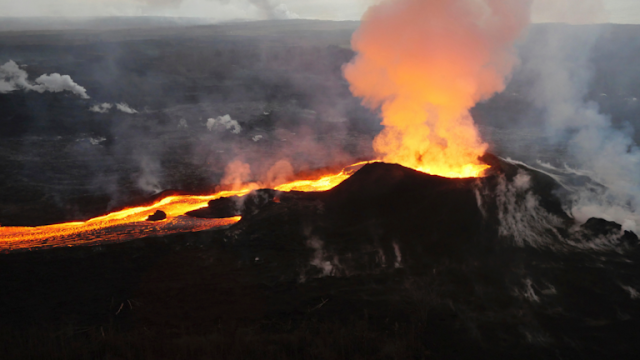 Lava domes are formed by thick magma bubbles that rise to the surface and pile up around the vent of the Volcano. Researchers from Oregon State University suggest that there isn’t enough pressure to cause a violent eruption, so the magma just piles up instead.

“Lava domes grow by endogenic dome growth or exogenic dome growth. The former implies the enlargement of a lava dome due to the influx of magma into the dome interior, and the latter refers to discrete lobes of lava emplaced upon the surface of the dome. It is the high viscosity of the lava that prevents it from flowing far from the vent from which it extrudes, creating a dome-like shape of sticky lava that then cools slowly in-situ. Spines and lava flows are common extrusive products of lava domes.”

Mount Merapi, Gunung Merapi, which literally Fire Mountain in Indonesian and Javanese, is an active stratovolcano located on the border between Central Java and Yogyakarta provinces, Indonesia. This location has been continually generating lava domes for centuries. 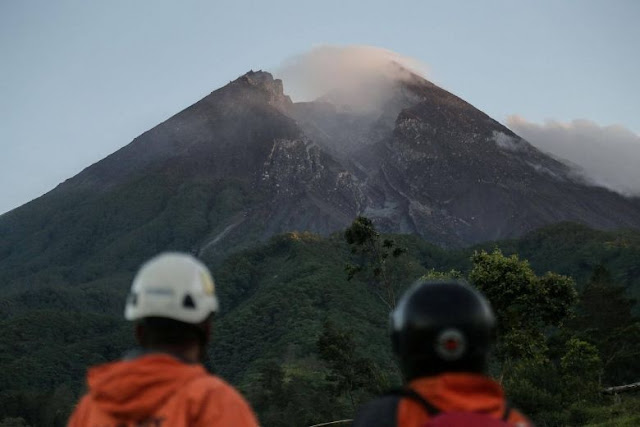 Members of a search and rescue team watch the volcano activity on Mount Merapi after its alert level was increased following a series of minor eruptions in Cangkringan, Yogyakarta, Indonesia, on May 22, 2018. Photo Credit: Reuters

In a blog post, Oregon State explained that “Like lava flows, they typically do not have enough gas or pressure to erupt explosively, although they may sometimes be preceded or followed by explosive activity. However, unlike lava flows, the lava that forms domes is often to thick and sticky to flow very far, and thus instead pile up thick and high around the vent.”

Oregon state also noted that when lava domes are growing rapidly and becoming unstable they will often collapse and spawn large and deadly pyroclastic density currents.