Researchers Made 3,900-Pound Boulders They Can Move by Hand, Giving More Insights Into Ancient Engineering 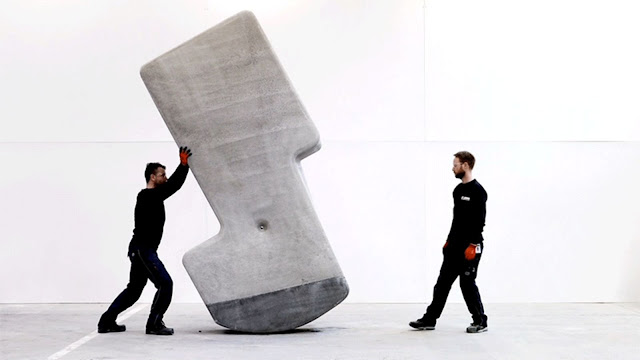 How were giant ancient structures like Stonehenge, or the towering Moai heads on Easter Island, assembled at a time when cranes and trucks were still hundreds of years away? Researchers at MIT have given more credence to theories that ancient engineers were masters of balance and leverage with a new experiment that produced giant concrete structures, some 3,900+ pounds in weight, that can be still be maneuvered by hand.

Matter Design (which was co-founded by Brandon Clifford, who’s also an assistant professor at MIT) worked with CEMEX, a company that specializes in building materials, to design a series of over-sized concrete monoliths that could be assembled like giant building blocks into a larger, functional structure. But despite weighing many tons a piece and being durable enough to survive hundreds of years, the concrete blocks feature unique makeups and shapes that make them relatively easy to move, even by just a single person.


There’s a couple of different design approaches at work here. The blocks, which are also known as massive masonry units—or MMUs, for short—are made from concrete with varying densities to allow precise control over where the object’s center of gravity ends up, adding stability and balance. And while each giant block looks like a random blob, they’re engineered with strategically placed bevels, rounded edges, pivot points, handles, and interlocking features. The resulting structures are still far too heavy for a human to lift, but they can be rocked, pivoted, tilted, walked, and even rolled from one location to another, with remarkable ease and precision.

So yes, the idea that 82-ton Moai statues were rocked and walked across an island to their final resting places is not implausible. But this experiment does more than just prove a hypothesis. Given advances in 3D printing, especially on grander scales, this approach could be used to design and build permanent, durable structures in places where a truck or a towering crane would be impossible, or too cost-prohibitive, to employ. In places where flooding is a threat or water levels are already rising, concrete walls could be easily assembled by local residents. Or heavy, impenetrable barricades could be quickly maneuvered into a place where threats are imminent, and there’s no time to build a more elaborate structure. One day you might even assemble your new home like a giant concrete Lego set. Just throw down a rug or two and those concrete walls won’t seem so cold.