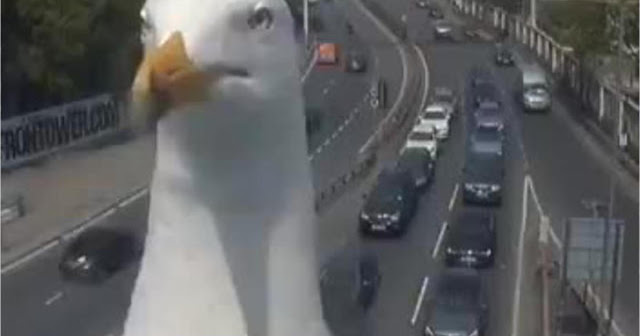 A very photogenic seagull caught the attention of Twitter users this week after repeatedly perching in front of a London traffic camera. They say the early bird gets the worm, but the persistent seagull apparently gets something even better: Viral internet fame.

The seagull first made its appearance on Twitter Monday, when its photo was posted to TfL Traffic News, an account that posts London traffic updates. Transport for London (TFL) is "a local government organisation responsible for most aspects of London's transport system," according to its website.
The account captioned the photo of the bird, staring right into the camera, "Happy Monday..." The account posted a photo of the bird once again early Tuesday morning with the caption, "Guess who's back?!"
However, it was the third tweet -- an 11-second long video -- posted hours later that really ruffled feathers. The account joked the bird was a traffic reporter in the caption, writing, "Due to popular demand, a quick update from our reporter just north of the Blackwall Tunnel....." The tweet garnered more than 12,000 retweets and 37,000 likes, at press time. It appears the bird has returned to the same location all three times, with the camera displaying Brunswick Rd in all three posts.
While the account delivered a real w-inger, Twitter users also joined in on the fun, tweeting hilarious commentary of their own. Journalist Paul Bradbury tweeted as the voice of the bird, "Well, Dave, as you can see it's starting to busy up here. Best to wing it on an alternative route if you can." Journalist Rob Zerwekh also chimed in, writing a pun-filled tweet, "You're so gullible to take the A102 Blackwall Tunnel today. Make the right caw, and wing it over to the next bridge."
Liz Dueweke, an anchor with Seattle's Fox News affiliate, also got in on the fun, riffing off of a classic joke. "We are still waiting for confirmation that the chicken has indeed crossed the road, " she tweeted. "Back to you." Her joke even warranted another punny response for Seattle Seahawks digital reporter John Boyle: "Please stop, these puns are terri-gull."
However, one user didn't think the bird was a traffic reporter at all, but joked it was a massive version of itself instead. "RUN FOR YOUR LIVES IT'S A FIFTY FOOT SEAGULL" wrote user @MothTwiceborn.
While the internet doesn't often agree, a very camera-friendly seagull brought many laughs to Twitter users this week, showing that birds of a feather really do flock together. As long as puns are involved.