No Comments
Apple is manufacturing the new Mac Pro in China, marking a change from the previous Mac Pro that was made in the US.
Apple made the previous Mac Pro in Austin, Texas, beginning in 2013. But with the new Mac Pro unveiled this month being made in China, Apple is "shifting abroad production of what had been its only major device assembled in the US as trade tensions escalate between the Trump administration and Beijing," The Wall Street Journal reported today.
"The tech giant has tapped contractor Quanta Computer Inc. to manufacture the $6,000 desktop computer and is ramping up production at a factory near Shanghai," according to the Journal's sources. "Quanta's facility is close to other Apple suppliers across Asia, making it possible for Apple to achieve lower shipping costs than if it shipped components to the US."
Apple told the Journal that it designs and engineers the new Mac Pro in the US and that the computer includes some US-made components. "Final assembly is only one part of the manufacturing process," Apple said, according to the Journal.
President Trump has urged Apple to make more products in the US, and his administration plans 25% tariffs on products imported from China. Apple last week urged the US government to avoid issuing the new tariff, saying it would make production of iPhones, iPads, Macs, AirPods, and Apple TVs more expensive.
We contacted Apple this morning and will update this story if we get a response.
Apple unveiled the new Mac Pro at its Worldwide Developers Conference on June 3, and the company says it will be released in the fall. These pictures from the event (taken by Senior Reviews Editor Samuel Axon) show what the new hardware looks like upon final assembly: 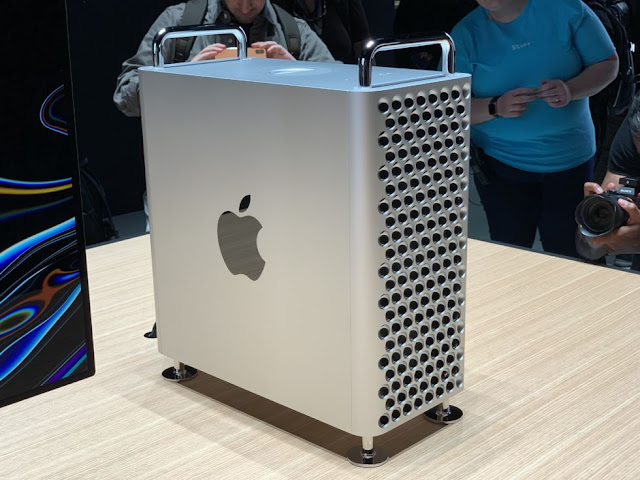 Problems in US production

In May 2013, Apple CEO Tim Cook confirmed plans to make a new Mac computer in Texas and said the company would spend $100 million to bring manufacturing stateside. But Apple ran into problems with the US-based Mac production.
Apple "struggled to find enough screws" when it began making the 2013 Mac Pro, a New York Times article explained. "Tests of new versions of the computer were hamstrung because a 20-employee machine shop that Apple's manufacturing contractor was relying on could produce at most 1,000 screws a day." The screw shortage and other problems caused a months-long delay in Mac Pro sales.

7,001 people are talking about this
The design of the 2013 Mac Pro was also a problem. In 2017, Apple executive Craig Federighi told journalists that "we designed ourselves into a bit of a thermal corner," as the Mac Pro's cooling systems weren't able to handle powerful GPUs. The computer also didn't have the kind of modularity and expandability demanded by pro customers.
Mac Pro sales were also not helped by the lack of a major upgrade for more than five years. "Making the new model in China isn't likely to affect many workers in Texas because demand for the old Mac Pro had fizzled years ago," the Journal wrote today. The Texas facility run by Apple contractor Flex had "shifted to refurbishing already-made computers" and "continues to make products for HP Inc. and other companies."