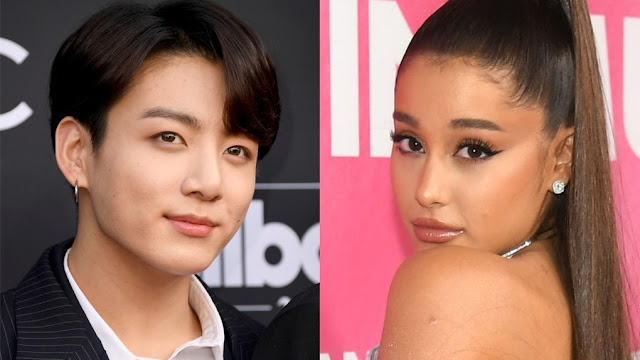 Remember back at the beginning of May when ARMYs lost their collective mind after Jungkook finally got to meet Ariana Grande? No? Well, then lemme get you up to speed. See, BTS had a rare day off from their sold-out Speak Yourself tour, so Jungkook decided to roll up to Ari's Sweetener show at the Staples Center in Los Angeles with her manager Scooter Braun. After the concert, JK hit up Twitter with an appreciation post for the "7 Rings" singer, saying that seeing her perform live made him want to 'work harder.' My heart! And wait — there's more! Because we now have BTS' Jungkook's story about meeting Ariana Grande, and what Kookie took away from the experience is actually pretty profound, you guys.
OK, so... in a recent interview with the Japanese magazine Anan, Jungkook revealed exactly how much seeing Grande in action increased his own passion for performing and inspired him to keep on learning.
"The more I watch other artists’ performances, the more I want to do on stage," Jungkook explained to the publication, according to a fan translation of Jungkook's interview by @K00kceptional. "It’s an honor to be able to enjoy while receiving inspiration and stimulation."
He's just so incredibly humble.
"Before her concert, I told Ariana 'There’s a lot of things I want to learn from watching your concert'," Jungkook continued. "We also gather before our performances [to] start and pull ourselves together, and she was doing the same thing. She called on to me to say 'Let’s do it together,' and she let me into her circle."
Pretty freaking cool.