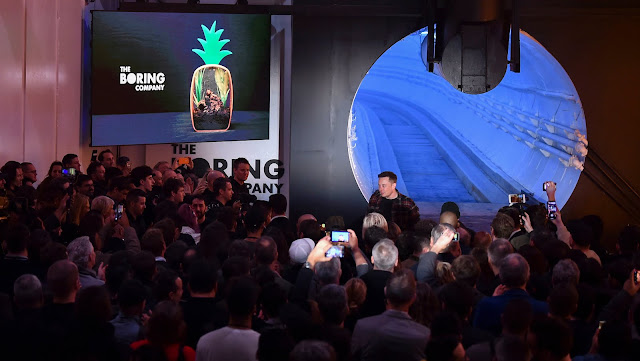 Back in 2017, Elon Musk had grand visions for the test track built by The Boring Company, his tunneling firm, in Los Angeles. The Boring Company’s tunneling work was closely linked to Musk’s Hyperloop idea, which would require hundreds of miles of tunneling to be viable, although the actual test track in California bore none of the traits of an air vacuum-based transportation system. It would have proprietary vehicles with varying capacities for private travel, public transport, or freight. They would travel along electrified skates for frictionless movement. It would be fast and efficient, but more importantly, it would be different, because he’s a genius.

Six months ago, the first demonstration of that track didn’t quite match that vision: it was a Tesla Model X on a sled going down a very bumpy tunnel at roughly 50 mph.

At the time, Musk said the bumpiness was only temporary: “That bumpiness will definitely not be there down the road—it will be smooth as glass.”

Credit where credit’s due: it does appear to be smooth as glass now, according to a video The Boring Company released of a car going 127 mph down the tunnel. How did it achieve such miraculous speed and comfort improvements in a mere six months?

Yes, for those keeping score, in a mere two years we’ve gone from a futuristic vision of electric skates zooming around a variety of vehicles in a network of underground tunnels to—and I cannot stress this enough—a very small, paved tunnel that can fit one (1) car.

The video’s marketing conceit is that the car in the tunnel beats a car trying to go the same distance on roads. You’ll never believe this, but the car that has a dedicated right of way wins. Congratulations to The Boring Company for proving dedicated rights of way are important for speedy transportation, something transportation planners figured out roughly two centuries ago. I’m afraid for how many tunnels they’ll have to dig before they likewise acknowledge the validity of induced demand.

Indeed, The Boring Company hasn’t just given up on the sleds in the test track. The company recently signed a $48.6 million contract with Las Vegas to build a short people-mover through their convention center. But, as Curbed’s Alissa Walker has been pointing out, that plan is also for the familiar technology of cars with rubber tires in tunnels on pavement.

Everyone is reporting this project as a “subway,” “train,” “tram,” or “people mover.” The contract does not mention rails or tracks. It is cars, on rubber tires, in a tunnel. https://t.co/dPX45MF3wx
— Alissa Walker (@awalkerinLA) May 23, 2019

Why did Musk give up on his sled dream? Why was the tunnel paved over? Here’s from the man himself: