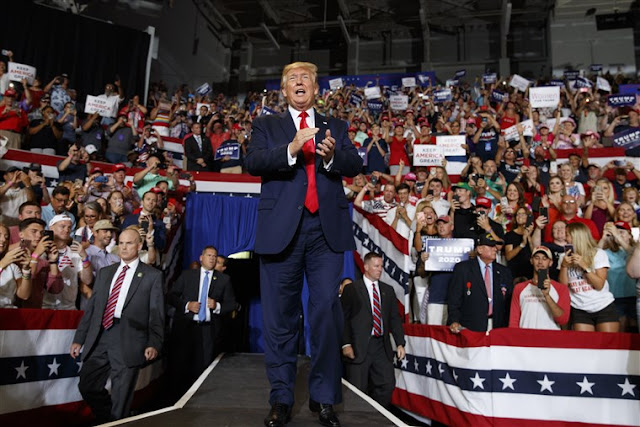 In the wake of President Donald Trump's tweets suggesting several nonwhite progressive congresswomen "go back" to their countries — three of them were born in the U.S. — it's tempting for Democrats to believe the comments will backfire with an increasingly diverse electorate and seriously damage his re-election prospects.

But the cold reality for Democrats? The bulk of the nation's demographic transformation is taking place in states that matter the least in deciding the Electoral College.

Democrats' worst nightmare came true in November 2016 when Hillary Clinton captured 2.9 million more votes than Donald Trump but he still comfortably prevailed in the Electoral College, 306 to 232. As much as they would like to purge that outcome from memory, Democrats would be unwise to write it off as a fluke: In 2020, it's possible Trump could win 5 million fewer votes than his opponent — and still win a second term.

The nation's two most populous states, California and Texas, are at the heart of Democrats' geography problem.

Both behemoths are growing more diverse at a much faster rate than the nation — owing to booming Asian and Latino populations — and are trending toward Democrats. Yet neither blue California nor red Texas would play a pivotal role in a close 2020 election, potentially rendering millions of additional Democratic votes useless.

Over the past four years for which census estimates are available, California's population of nonwhite voting-age citizens has exploded by 1,585,499, while its number of white voting-age citizens has declined by a net 162,715. The Golden State's GOP is in free fall: In May 2018, the state's Republican registrants fell to third place behind "no party preference" voters for the first time. In 2016, Clinton stretched Barack Obama's 2012 margin from 3 million to 4.2 million votes. But padding that margin by another 1.2 million votes wouldn't yield the 2020 Democratic nominee a single additional Electoral vote.

Over the same time period, Texas has added a net 1,188,514 nonwhite voting-age citizens and just 200,002 white voting-age citizens. Texas' economic boom has attracted a diverse, highly professional workforce to burgeoning urban centers of Dallas, Houston, Austin and San Antonio and shifted the state's politics leftward — especially as GOP votes have begun to "max out" in stagnant rural areas. In 2016, Clinton cut Obama's 2012 deficit from 1.2 million to just over 800,000. But again, even cutting Trump's margin by 800,000 wouldn't yield the 2020 Democratic nominee a single additional Electoral vote.

Four-year decline in the non-Hispanic white share of voting age citizens (2013-2017)
Demographic change is most robust in the least competitive states. 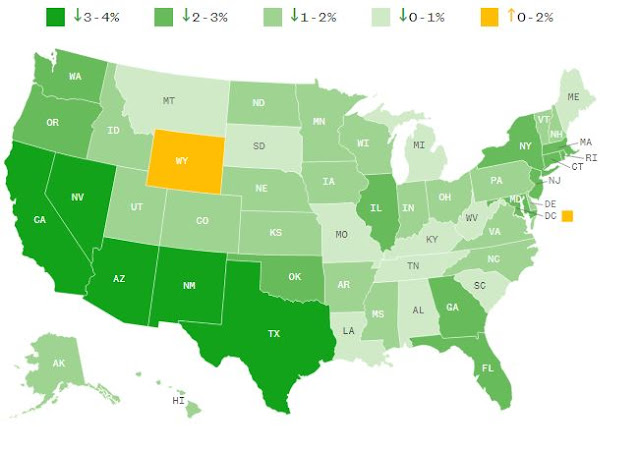 Meanwhile, demographic transformation isn't nearly as rapid in the narrow band of states that are best-positioned to decide the Electoral College — a factor that seriously aids Trump.

In 2016, Trump's victory hinged on three Great Lakes states he won by less than a point: Michigan (0.2 percent), Pennsylvania (0.7 percent) and Wisconsin (0.8 percent). All three of these aging, relatively white states have some of the nation's highest shares of white voters without college degrees — a group trending away from Democrats over the long term. And the nonwhite share of the eligible electorate in each of the three has increased at only a quarter to a half of the rate it has surged in California, Texas and Nevada.

Democrats eagerly point out that they swept Senate and governors' races in Michigan, Pennsylvania and Wisconsin in 2018. And they flipped two seats in Michigan and four in Pennsylvania on their way to taking back the House.

But Trump could lose Michigan and Pennsylvania and still win the Electoral College, so long as he carries every other place he won in 2016. And Wisconsin didn't provide as clear a verdict in 2018. Even with favorable turnout in a "blue wave," Democrats won Wisconsin's governor's race only by a point and failed to gain a House seat. If enough Trump voters who sat out 2018 — particularly white working-class men — return to the polls in 2020, the Badger State could easily stay red.

There are three other states Trump carried by fewer than five points in 2016 that could play a decisive role in 2020: Arizona (3.5 percent), Florida (1.2 percent) and North Carolina (3.7 percent).

Of the "Sun Belt" trio, Florida was the closest in 2016 yet remains one of Democrats' biggest frustrations.

Over the past four years of census data, it had the nation's eighth sharpest increase in the nonwhite share of voting-age citizens. But the Sunshine State's trend lines favor Trump: The rapid influx of conservative Midwestern retirees to the Panhandle and Gulf Coast, along with Florida's above-average Hispanic support for GOP candidates, explain why Sen. Rick Scott and Gov. Ron DeSantis, both Republicans, defied the "blue wave" in 2018.

Democrats' strongest Sun Belt pickup opportunity in 2020 may actually be Arizona. Its electorate isn't very rural and its share of nonwhite voting-age citizens is growing at the third-fastest rate in the country, behind only Nevada and California.

Unlike in Florida, where Democrats lost a Senate seat, Arizona Democrats picked up a Senate seat in 2018. And North Carolina looks likely to remain competitive as the Research Triangle, Charlotte and the Piedmont Triad continue to attract young, left-leaning professionals.

Together, these six states — Arizona, Florida, Michigan, North Carolina, Pennsylvania and Wisconsin — are best-positioned to decide which candidate reaches the magic 270 Electoral votes. That's not to say that other states won't be close: It's possible Trump could win Maine, Minnesota, Nevada or New Hampshire, and it's possible the Democratic nominee could win Georgia, Iowa, Ohio or Texas. But if either scenario materializes, the election will be a blowout and the victor will likely have already won the "swing six" comfortably.

Bottom line: Mired at an approval rating in the low 40s, Trump has a narrow path to re-election. But the concentration of demographic change in noncompetitive states, particularly California and Texas, threatens to further widen the chasm between the popular vote and the Electoral College, easing his path. Trump could once again win with less than 47 percent, a victory threshold far below the share of the popular vote the Democratic nominee might need.

The ultimate nightmare scenario for Democrats might look something like this: Trump loses the popular vote by more than 5 million ballots, and the Democratic nominee converts Michigan and Pennsylvania back to blue. But Trump wins re-election by two Electoral votes by barely hanging onto Arizona, Florida, North Carolina, Wisconsin and Maine's 2nd Congressional District — one of the whitest and least college-educated districts in the country.

A scenario that divergent isn't especially likely, but after 2016, Democrats shouldn't discount it either.