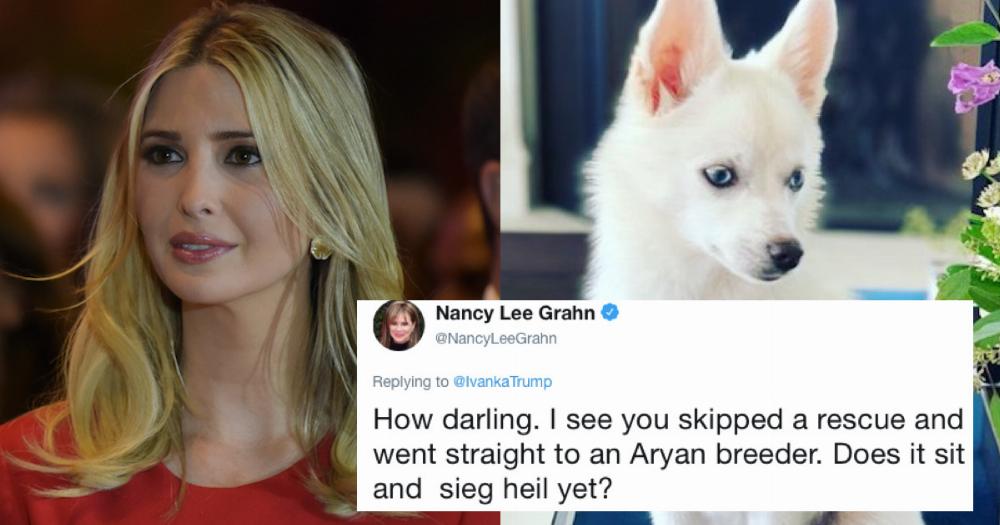 Americans may love dogs, but many took to Twitter with some harsh words for the one first daughter Ivanka Trump gifted her daughter.

"Meet Winter, Arabella's birthday dream come true and the newest member of the Kushner family!" Trump tweeted along with a heart-eyed emoji and a picture of a blue-eyed white dog.
Some Twitter users interpreted Trump's present to her eight-year-old daughter Arabella Rose Kushner as a sign the senior White House adviser prefers whiteness, like her father President Donald Trump has been accused of preferring. Recently, she has also been criticized for remaining largely silent on the president's controversial immigration policies.
"The dog will fit right in. #itswhiteenough," Claude Taylor, who worked on ex-President Bill Clinton's 1992 and 1996 campaigns and as White House volunteers director, tweeted on Saturday.
"An all white dog," another Twitter user tweeted that day. "Shocking."
American actress and comedian Yvette Nicole Brown, who is African-American, replied to Ivanka Trump's tweet Saturday: "Good thing it's a white dog. Your dad hates the blacks."
Before becoming president, Donald Trump reportedly said he did not want black men handling his money and that blacks are lazy. As president, he has boasted that unemployment among African-Americans is at a record low.
The criticism of Ivanka Trump's dog choice continued on Sunday.
American actress Nancy Lee Grahn tweeted, "How darling. I see you skipped a rescue and went straight to an Aryan breeder."
"Does it sit and sieg heil yet?" Grahn asked, referring to a victory salute at political rallies used by Nazis.
A former member of the alternative rock band Marcy Playground, Jared Kotler, attacked Ivanka Trump's White House role and contributions to the country.
"Pro tip: when everyone hates you for being a spoon fed nothing grifter who's full of s***, an advisor to the president who doesn't advise, when you want to seem human and get a dog, maybe a shelter dog would show humanity," Kotler, a television producer, tweeted. "But all white and blue eyes is on brand. F*** off."
Other Twitter users bashed the first daughter for focusing on getting a new pet while thousands of migrant families face inhumane conditions at U.S. detention facilities and the Trump administration recently ordered raids by U.S. Immigration and Customs Enforcement.
"Thousands of children in US custody [haven't] bathed or brushed their teeth or even been hugged in weeks thanks to your father but cool you got a new puppy I guess," a Twitter user commented on Saturday.
But Ivanka Trump got support from some users who thought Trump opponents took it too far.