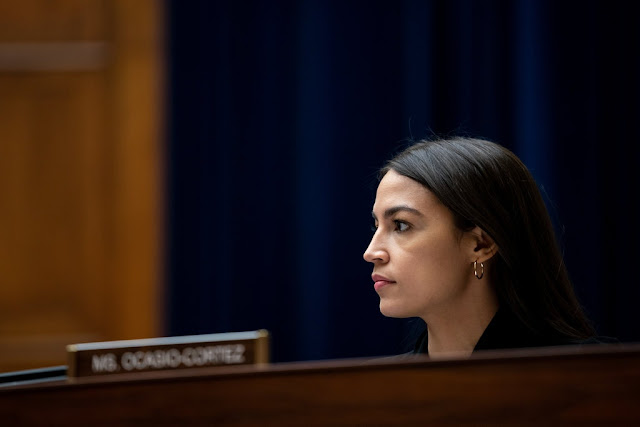 A Louisiana police officer last week said in a Facebook post that Rep. Alexandria Ocasio-Cortez is a "vile idiot" who should be shot.

A screenshot of the post by veteran Gretna police officer Charlie Rispoli was taken by The Times-Picayune/The New Orleans Advocate. In it, Rispoli shares a blog post that falsely claims the New York Democrat said "We pay soldiers too much."

"This vile idiot needs a round," reads Rispoli's remarks above Ocasio-Cortez's image. "And I don't mean the kind she used to serve," he adds, referring to her prior career as a bartender.

Gretna Police Chief Arthur Lawson said the post was "disturbing" but did not believe Rispoli, who has been with the department since 2005, intended it as a genuine threat, The Times-Picayune reported.

"I will tell you this: This will not go unchecked," Lawson said, according to the newspaper. "I’m not going to take this lightly and this will be dealt with on our end. It’s not something we want someone that’s affiliated with our department to make these types of statements. That’s not going to happen."

The Gretna Police Department did not immediately respond to USA TODAY's request for comment.

In June 2017, a man opened fire on a group of Republican members of Congress during their baseball team's practice in Virginia. Rep. Steve Scalise of Louisana was severely injured in the attack.

In May, Ocasio-Cortez said she was regularly getting "hateful messages" and a "flood of death threats." She said there was a connection between the threats and the reporting about her on conservative news media outlets and also blamed Fox News.

What people don’t (maybe do) realize is when orgs air these hateful messages, my life changes bc of the flood of death threats they inspire.

On Thursday, Ocasio-Cortez, a fierce critic of the Trump administration's immigration policies, questioned Homeland Security head Kevin McAleenan over threatening messages directed at her – including Photoshopped images depicting her rape – on a secret Facebook group for Border Patrol agents.

Ocasio-Cortez is one of four Democratic congresswomen, known as "the Squad," who have been the target of sharp criticism from President Donald Trump. Trump has said Ocasio-Cortez and Reps. Ilhan Omar, D-Minn., Ayanna Pressley, D-Mass., and Rashida Tlaib, D-Mich., "hate our country."

The president has also suggested that the four congresswomen of color, all of whom are U.S. citizens and three of whom were born in the U.S., should return to their countries of origin and fix the problems there before trying to make legislative changes in the U.S.

Omar has said she has faced an increase in death threats since she became a target of the president's ire. In April, a New York man was accused of saying he would "put a bullet" in Omar. That same month, a Florida man was arrested after he allegedly threatened several high-profile Democrats, including Tlaib and Omar, whom he said he wanted to throw off the Empire State Building.

Trump and his family have been targeted as well. In May, a New Jersey man was arrested for allegedly saying he wanted to "bomb Trump Tower," and two years before that a Michigan man was charged with threatening to assassinate Trump. And in February 2018, Donald Trump Jr.'s ex-wife, Vanessa Trump, was rushed to the hospital after opening a package containing a "suspicious" white substance that was later determined to be non-toxic.

Those around Trump and his administration have also been confronted in public on a number of occasions. Last month, Eric Trump said an employee at a Chicago cocktail bar spat on him. In April, charges were dropped against a woman who White House counselor Kellyanne Conway says grabbed her and shook her by the shoulders.