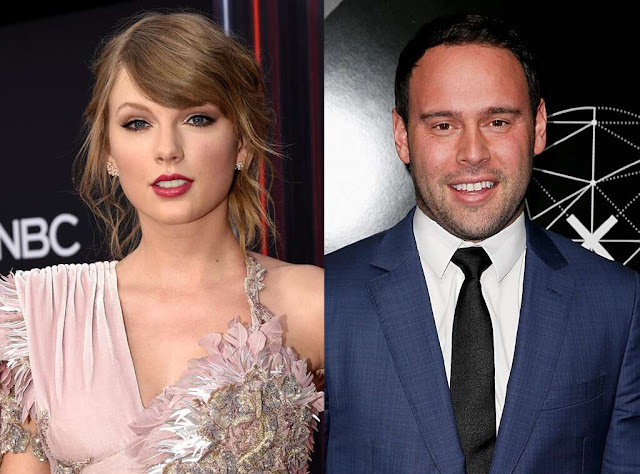 Swift says in a scathing Tumblr post that she is "sad and grossed out" and heartbroken by the news, and accuses Braun of bullying her for years.

. The deal, made for a reported $300 million, includes Big Machine Music, which means Braun's company will gain the six albums that Swift has released to date, as well as music from other top artists such as Reba McEntire, Sheryl Crow, and Lady Antebellum.

"For years I asked, pleaded for a chance to own my work," Swift wrote on her Tumblr page on Sunday. "Instead I was given an opportunity to sign back up to Big Machine Records and 'earn' one album back at a time, one for every new one I turned in. I walked away because I knew once I signed that contract, [Big Machine founder] Scott Borchetta would sell the label, thereby selling me and my future. I had to make the excruciating choice to leave behind my past. Music I wrote on my bedroom floor and videos I dreamed up and paid for from the money I earned playing in bars, then clubs, then arenas, then stadiums."

"Some fun facts about today's news: I learned about Scooter Braun's purchase of my masters as it was announced to the world," she continued. "All I could think about was the incessant, manipulative bullying I've received at his hands for years."

Braun and Borchetta have not responded publicly to Swift's remarks.

Braun did post on his Instagram page on Sunday a pic of him and Borchetta, who will join the board of Ithaca Holdings and acquire a minority interest in the company while remaining president and CEO of Big Machine Label Group.

"Genuinely grateful for my new partner @scott.borchettaand the entire @bigmachinelabelgroup team," Braun wrote. "We together at Ithaca are going to do amazing things and our hope is to give every artist the tools they need to succeed in all arenas. Thank you again for the trust Scott. Let's get it!"


Genuinely grateful for my new partner @scott.borchetta and the entire @bigmachinelabelgroup team. We together at Ithaca are going to do amazing things and our hope is to give every artist the tools they need to succeed in all arenas. Thank you again for the trust Scott. Let’s get it!
A post shared by Scooter Braun (@scooterbraun) on Jun 30, 2019 at 8:09am PDT


In her Tumblr post, Swift provided examples of alleged bullying by Braun.

Swift attached a screenshot of Bieber's 2016 Instagram post that shows him FaceTiming Braun and rapper and Kim's husband Kanye West, who famously feuded with Swift on and off, most recently in 2016. Bieber captioned the pic, "Taylor swift what up." He later removed the caption.


"This is Scooter Braun, bullying me on social media when I was at my lowest point," Swift wrote on her screenshot. "He's about to own all the music I've ever made.

"Now Scooter has stripped me of my life's work, that I wasn't given an opportunity to buy," Swift continued in her post. "Essentially, my musical legacy is about to lie in the hands of someone who tried to dismantle it. This is my worst case scenario. This is what happens when you sign a deal at 15 to someone for whom the term 'loyalty' is clearly just a contractual concept. And when that man says, 'Music has value,' he means its value is beholden to men who had no part in creating it."

Swift said, "When I left my masters in Scott's hands, I made peace with the fact that eventually he would sell them. Never in my worst nightmares did I imagine the buyer would be Scooter. Any time Scott Borchetta has heard the words 'Scooter Braun' escape my lips, it was when I was either crying or trying not to. He knew what he was doing; they both did. Controlling a woman who didn't want to be associated with them. In perpetuity. That means forever."

In November, Swift left Big Machine Music and signed a new deal with Universal Music Group. Braun would have no legal claim over the rights to her new singles "Me!" and "You Need to Calm Down," released this year, or her upcoming seventh album Lover, set to be released by the label in on August 23.

"Thankfully, I am now signed to a label that believes I should own anything I create," she wrote on Tumblr. "Thankfully, I left my past in Scott's hands and not my future. And hopefully, young artists or kids with musical dreams will read this and learn about how to better protect themselves in a negotiation. You deserve to own the art you make. I will always be proud of my past work. But for a healthier option, Lover will be out August 23. Sad and grossed out, [broken heart] Taylor."

After Swift published her post, Mandy Teefey, mother of the singer's friend and fellow pop star Selena Gomez, sent her a message of support on Instagram.

"@Taylorswift I wish I could give you a big hug right now!" Teefey wrote. "Thank you for speaking out about this and teaching future young artist about protecting themselves. I don't understand the pleasure of power plays to simply hurt people! To deny you the option to own your blood, sweat and tears, especially as a young women who shared growing up in front of the world, is heartbreaking!! XO!!"