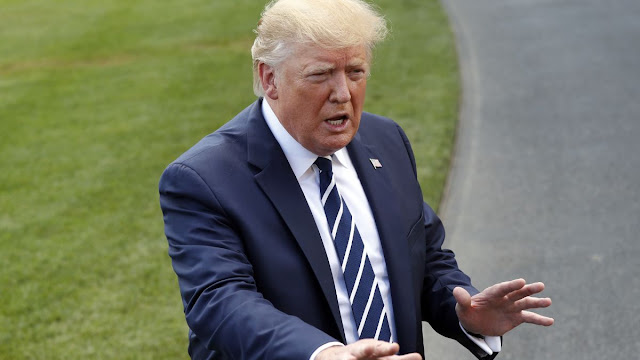 During an exchange with reporters as he left the White House on Friday afternoon, President Donald Trump made false accusations against both Rep. Alexandria Ocasio-Cortez and Rep. Ilhan Omar, two of the four Democratic members of Congress against whom he launched a racist "go back" attack earlier in the week.

In both cases, he was twisting a quote to bolster his allegation that "they hate our country."

Facts First: Ocasio-Cortez did not call Americans "garbage"; she said in March that the country has gone so far in the wrong direction that people shouldn't be satisfied with moderate policies that are merely "10% better from garbage." None of the congresswomen have uttered the phrase "evil Jews"; Omar tweeted in 2012 that Israel had committed "evil doings."

Let's tackle the comments one by one.

Ocasio-Cortez, a New York congresswoman, did not call any person "garbage," much less Americans as a group.

Ocasio-Cortez was asked at an event at the South by Southwest festival why it has taken so long for there to be Democratic candidates who run on bold progressive policies like Medicare for All and the Green New Deal.

Ocasio-Cortez said the country has drifted so far in the wrong direction, away from helping average working people, that ambitious initiatives are necessary. Given that society has "strayed so far away from what has really made us powerful and just and good and equitable and productive," she said, "moderate" policies are insufficient.

"I think all of these things sound radical compared to where we are. But where we are is not a good thing. This idea of 10% better from garbage shouldn't be what we settle for. It feels like moderate is not a stance, it's just an attitude toward life of like, 'meh,' " she told her interviewer from The Intercept.

Her remark can be interpreted as her saying that the current state of the country is "garbage." But it is false to say, as Trump did, that she called "our people" garbage.

Trump was briefly closer to accurate in his rally speech in North Carolina on Wednesday, in which he said, "She described contemporary America" as garbage. But he then added, "That's you, that's me, that's all of us -- as garbage." That's just not true.

In 2013, Trump tweeted out this compliment, ostensibly from another user, about himself: "@JoeBloww79: @realDonaldTrump is able to see through all the garbage in our society. Wish more had the ability." In 2014, he tweeted: "The United States, under President Obama, has truly become the 'gang that couldn't shoot straight.' Everything he touches turns to garbage!"

Omar, a Minnesota congresswoman, tweeted in 2012: "Israel has hypnotized the world, may Allah awaken the people and help them see the evil doings of Israel. #Gaza #Palestine #Israel."

The tweet was called anti-Semitic by both Republicans and Democrats when it resurfaced this year.

Omar initially defended it, telling CNN: "I don't know how my comments would be offensive to Jewish Americans. My comments precisely are addressing what was happening during the Gaza War, and I am clearly speaking of the way the Israeli regime was conducting itself in that war."

After the criticism continued, Omar said she had just learned from Jewish organizations that her use of the word "hypnotize," which has a long anti-Semitic history, was offensive.

"It's now apparent to me that I spent lots of energy putting my 2012 tweet in context and little energy is disavowing the anti-semitic trope I unknowingly used, which is unfortunate and offensive," she tweeted.

She emphasized again that she was not attacking the Jewish people, saying, "It is important to distinguish between criticizing a military action by a government and attacking a particular people of faith."

Some of her critics found this unsatisfactory. Regardless, it is indisputable that Omar did not say "evil Jews."