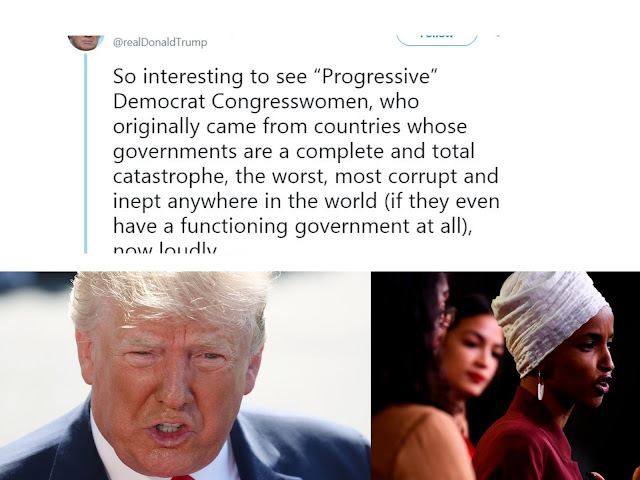 Trump did not name who he was attacking in Sunday's tirade but earlier this week he referenced New York Rep. Alexandria Ocasio-Cortez when the President was defending House Speaker Nancy Pelosi.

A group of Democrats, who are women of color and have been outspoken about Trump's immigration policies, last week condemned the conditions of border detention facilities. The group of women joining Ocasio-Cortez were Rashida Tlaib of Michigan, Ilhan Omar of Minnesota and Ayanna Pressley of Massachusetts.

So interesting to see “Progressive” Democrat Congresswomen, who originally came from countries whose governments are a complete and total catastrophe, the worst, most corrupt and inept anywhere in the world (if they even have a functioning government at all), now loudly......
— Donald J. Trump (@realDonaldTrump) July 14, 2019

Trump implied in the series of tweets that the congresswomen weren't born in America and sarcastically suggested, "they go back and help fix the totally broken and crime infested places from which they came."

Later Sunday, Ocasio-Cortez wrote on Twitter that the country she "come(s) from" and "swears to" is the US and suggested that Trump is "angry because you can't conceive of an America that includes us."

You are angry because you can’t conceive of an America that includes us. You rely on a frightened America for your plunder.

You won’t accept a nation that sees healthcare as a right or education as a #1 priority, especially where we’re the ones fighting for it.

Ocasio-Cortez, Tlaib and Pressley are natural-born US citizens, while Omar was born in Somalia and immigrated to the US when she was young. Omar became a citizen in 2000 when she was 17 years old, according to the New York Times.

Trump's tweets come as interest in the conditions of detention centers housing migrants has risen sharply and raids to round up undocumented immigrants are being conducted Sunday by Immigration and Customs Enforcement officials in multiple major cities across the nation.

CNN has reached out to the White House for comment on who Trump was targeting in his tweets.

Omar, responding to the President's attacks on Sunday, threw punches at Trump in a pair of tweets

As Members of Congress, the only country we swear an oath to is the United States.

Which is why we are fighting to protect it from the worst, most corrupt and inept president we have ever seen. https://t.co/FBygHa2QTt
— Ilhan Omar (@IlhanMN) July 14, 2019

Tlaib and Pressley also hit back at Trump on Twitter, with Tlaib saying

Yo @realDonaldTrump, I am fighting corruption in OUR country. I do it every day when I hold your admin accountable as a U.S. Congresswoman. Detroit taught me how to fight for the communities you continue to degrade & attack. Keep talking, you’ll be out of the WH soon. #TickTock
— Rashida Tlaib (@RashidaTlaib) July 14, 2019

THIS is what racism looks like. WE are what democracy looks like. And we’re not going anywhere. Except back to DC to fight for the families you marginalize and vilify everyday. pic.twitter.com/vYzoxCgN0X
— Ayanna Pressley (@AyannaPressley) July 14, 2019

Trump continued his attacks on the progressive House members Sunday evening, claiming they "speak so badly of our country."

....and the many terrible things they say about the United States must not be allowed to go unchallenged. If the Democrat Party wants to continue to condone such disgraceful behavior, then we look even more forward to seeing you at the ballot box in 2020!
— Donald J. Trump (@realDonaldTrump) July 15, 2019