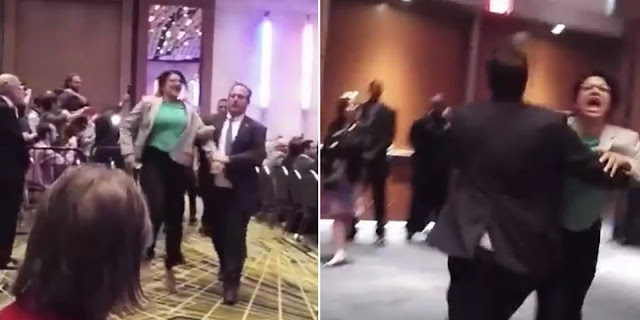 Hundreds of protesters were forcibly removed from Donald Trump's campaign rallies during his historic run to the White House in 2016. Now we know that Rep. Rashida Tlaib (D-Mich.) was one such protester.

"You guys are crazy!" Tlaib screams at Trump supporters as agents restrains her.

The interruption came during a speech that then-candidate Trump gave at the Detroit Economic Club in August 2016. A dozen other women joined Tlaib to create a commotion during his speech.

Tlaib, who formally served as a Michigan state representative, later boasted about her protest in an essay in the Detroit Free Press.


I can't describe the fear that gripped me when I rose in front of nearly 2,000 professionals at this tony, corporate setting. I watched as Trump supporters taunted the women who stood before me as they were aggressively and briskly led to the exits. I froze, feeling the anger around me that would make anyone tremble. Yet, I could only think of the unwavering love for my two sons to find the courage to do my own part.

Watching my 11-year old's anxiety increase the more he hears from his friends about what Donald Trump said or wants to do if he is elected has been heartbreaking. So when I heard Trump was coming to Detroit to speak only a few miles from our home, I couldn't say no when I was offered a ticket to attend his speech.

I told Trump that "our children deserve better" and I asked him to provide a better example to our kids. I implored him to read the U.S. Constitution. And then I was grabbed by several security personnel who physically moved me to the exit while I continued to express my concerns.

Perhaps the most ironic part of the incident is that the man who filmed Tlaib told her to "get a job." Well, she did.