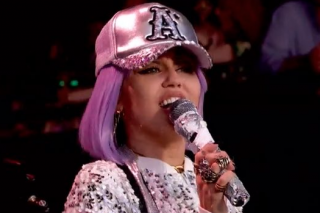 Miley Cyrus has surprised fans at Glastonbury 2019 by performing as Ashley O – the character she portrayed in the latest series of Black Mirror.

The US singer starred as the fictional popstar in the season five episode Rachel, Jack and Ashley Too, which debuted on Netflix earlier this month along with two other Charlie Brooker-created instalments of the dystopian show.

As Cyrus performed on the Pyramid Stage at Glastonbury on Sunday evening, she briefly brought the character to life once more. She donned a pink wig and sang ‘On A Roll’ – her reworked version of Nine Inch Nails ‘Head Like A Hole’ which featured in the show.

Praising the performance, another said: “Miley Cyrus actually came out at Glastonbury as Ashley O & performed on a roll, what an icon.”