With a straight face, GOP leader says party was ‘respectful’ of Obama 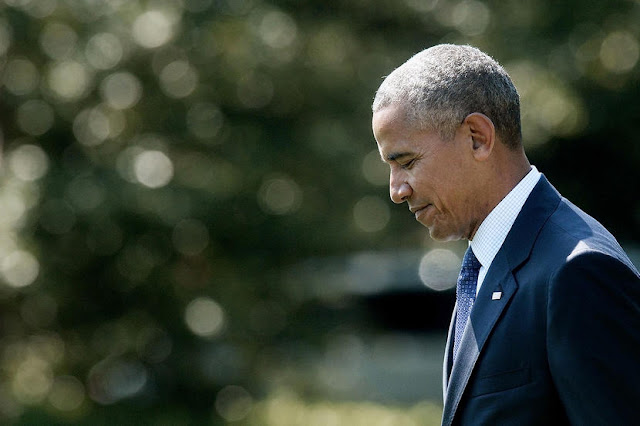 President Barack Obama walks across the South Lawn to board Marine One as he departs the White House, on Sept. 13 2016, in Washington, D.C. Photo by Olivier Douliery/AFP/Getty

“We expressed our disagreements in a respectful, respectful way.”

There’s video of the Louisianan’s comments. In case there were any doubts, Scalise did not appear to be kidding.

Which is a shame because it suggests the Republican congressman – the #2 member of the House GOP leadership – genuinely believes that he and his party were nothing but responsible and measured when expressing their disagreements with Barack Obama during his presidency. Republicans, in Scalise’s mind, set a high bar when it came to political decorum. Obama could take comfort in knowing that his GOP opponents took great care to treat him and his office with respect and decency.

I know better than to try to summarize an eight-year period in which Republicans disrespected the Obama presidency on a nearly daily basis, but one need not have an encyclopedic memory to recall incidents that disprove Scalise’s bizarre boast.

Remember the time a House Republican heckled Obama during a speech to a joint session? How about the years in which GOP officials tolerated – and at times, perpetuated – the racist birther conspiracy theory? Or incidents such as Rep. Mark Meadows (R-N.C.) vowing to send the Democratic president “home to Kenya or wherever it is”?

Or maybe the point at which 44 Senate Republicans demonstrated their “respect” for the office of the presidency by writing a letter to Iran, telling our enemy not to trust Obama or his word?

To bolster his point, Scalise added, “If [Obama] asked [Republicans] to go meet with him at the White House, we went.” That wasn’t true, either.

If GOP lawmakers want to defend Trump, fine. If they’re eager to attack Democrats who dare to criticize Trump, that’s OK, too. But if we’re going to look back at the Republican campaign against the Obama presidency, perhaps we can put down the rose-colored glasses?