Yes, Obama deported more people than Trump but context is everything 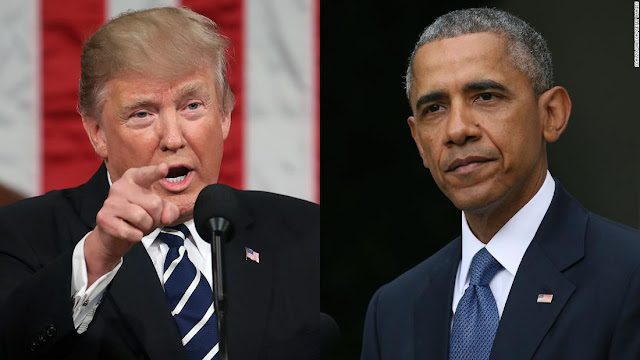 President Donald Trump wants to deport a lot of people this weekend. "You know what? They came in illegally. They have to go out," he told reporters Friday as he confirmed that planned immigration raids would go ahead in certain cities starting this weekend.

That's triggered a national outcry and anxiety in immigrant communities.

But immigration advocacy groups criticized then-President Barack Obama as the "deporter in chief" during his bid for reelection in 2012. It's a perception that former Vice President Joe Biden will have to answer for as he campaigns to carry on Obama's legacy.

The issue is complicated. The Bush administration moved toward removing people from the country with a court order. What's more commonly known as deportation is referred to now by the government as a "removal."

This sparked increased criticism from immigrant rights organizations. In previous administrations, far more people attempted to enter the country, and far more were turned away, often without a hearing before an immigration judge. That procedure used to be known as a "voluntary departure" but is now called a "return" by the government.

They all have the effect of a deportation, but there are more legal consequences for a removal than for a return. In totality, President George W. Bush deported even more people than Obama -- and President Bill Clinton deported more than Bush.

The number of undocumented immigrants who were either removed by the US government or who returned to their home country has decreased since 2000. 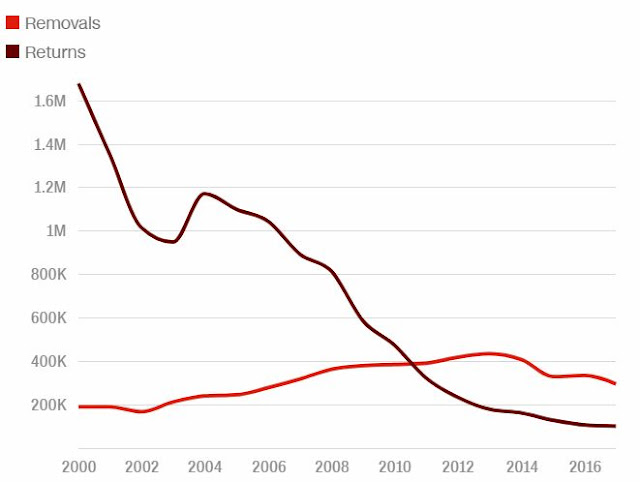 Those numbers alone don't tell the whole story, though, according to Obama administration officials.

"A straight numbers-by-numbers comparison doesn't provide an accurate picture of what was going on in the administration," Cecilia Muñoz, who was a top domestic policy adviser to Obama and is now with the left-leaning New America Foundation, said in a phone interview.

She argues that Obama prioritized deporting people convicted of serious crimes and recent arrivals who had no criminal records.

Trump, by contrast, she said, has rejected the policy of focusing on new arrivals and criminals and instead wants to deport as many people as possible.

It's impossible to ignore his rhetoric. He infamously called some Mexican immigrants "rapists," and focused his presidency around the idea that he would build a wall, get tough with Mexico and deport as many undocumented immigrants as possible.

Trump's planned raids come after years of claims that American citizens are harmed by the presence of undocumented migrants -- from inviting crime victims to the State of the Union address to his recent effort to add a citizenship question to the census.

Obama used executive action to temporarily give protected status to undocumented people who arrived in the US as children, and curbed deportations from the interior states of the country. His focus, particularly toward the end of his administration, was on quick "returns" of new arrivals at the border who were perceived to have had fewer ties in the US -- though that, controversially, included the same types of Central American migrants whose arrival has swamped the border this year.

The libertarian Cato Institute crunched the data and demonstrated that deportations from the interior of the country -- meaning away from the border, so, people who have likely been in the country longer -- were on the downswing during most of the Obama administration.

Trump has sought to end Obama's program shielding undocumented young people from deportation and has reversed the trend on internal deportations as he's sought to remove more people, including those who have been in the country a long time.

However, Trump still has not reached anywhere near the level of interior removals as the early Obama administration, according to Cato's analysis of data through 2018.

That has created a headache for Biden, who is now paying a political price for that Obama record. His campaign office in Philadelphia was briefly occupied and six immigration rights activists were arrested Wednesday. He's been confronted on the campaign trail.

He didn't mention Obama's record on deportations when he laid out an immigration policy in a meeting with the Miami Herald in June.

At the second night of the Democratic primary debate in June, Biden said there's no comparison between Trump's and Obama's records.

"President Obama, I think, did a heck of a job. To compare him to what this guy's doing is absolutely -- I find close to immoral," he said.

Muñoz argued it is Trump's lack of priorities about who to deport that is causing chaos in immigrant communities.

"People are in terror," she said. "They're scared of sending their children to school. That is a very, very different dynamic. There are no enforcement priorities in the Trump administration. That's the point. In the Obama administration there were clear priorities."