No Comments
Seniors spend nearly ten hours a day in front of televisions, smartphones and computers 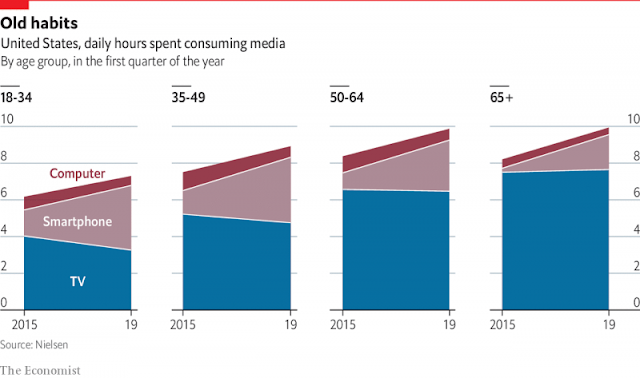 MANY PARENTS and grandparents will grumble about today’s screen-obsessed youth. Indeed, researchers find that millennials look at their phones more than 150 times a day; half of them check their devices in the middle of the night; a third glance at them immediately after waking up. And yet, when all screens are accounted for, it is in fact older folk who seem most addicted.

According to Nielsen, a market-research firm, Americans aged 65 and over spend nearly ten hours a day consuming media on their televisions, computers and smartphones. That is 12% more than Americans aged 35 to 49, and a third more than those aged 18 to 34 (the youngest cohort for whom Nielsen has data).

Most of that gap can be explained by TV. American seniors—three-quarters of whom are retired—spend an average of seven hours and 30 minutes in front of the box, about as much as they did in 2015 (this includes time spent engaged in other activities while the television is blaring in the background). They spend another two hours staring at their smartphones, a more than seven-fold increase from four years ago (see chart).

The amount of time that millennials devote to their mobile devices has also grown in the same period, from about one hour and 30 minutes to three hours and 30 minutes. But that has been largely offset by their dwindling interest in traditional TV. In fact, Nielsen reckons that daily screen time among 18- to 34-year-olds has increased by barely an hour in the last four years, the smallest rise of any age cohort that it tracks.

And what about teenagers? Recent data on this group are scarce. However, a report published in 2015 by Common Sense Media, a non-profit group, found that American teens aged 13-18 spent about six hours and 40 minutes per day on screens: slightly more than Nielsen recorded for 18- to 34-year-olds that year, but less than older generations. Today youngsters may waste hours scrolling through Instagram and shooting zombies on Fortnite. But probably no more than their elders fritter on chat-shows and repeats of soaps.