Back from the Moon, Apollo Astronauts Had to Go Through Customs

No Comments
Apparently moon visitors are subject to the same procedures as others who leave the country. 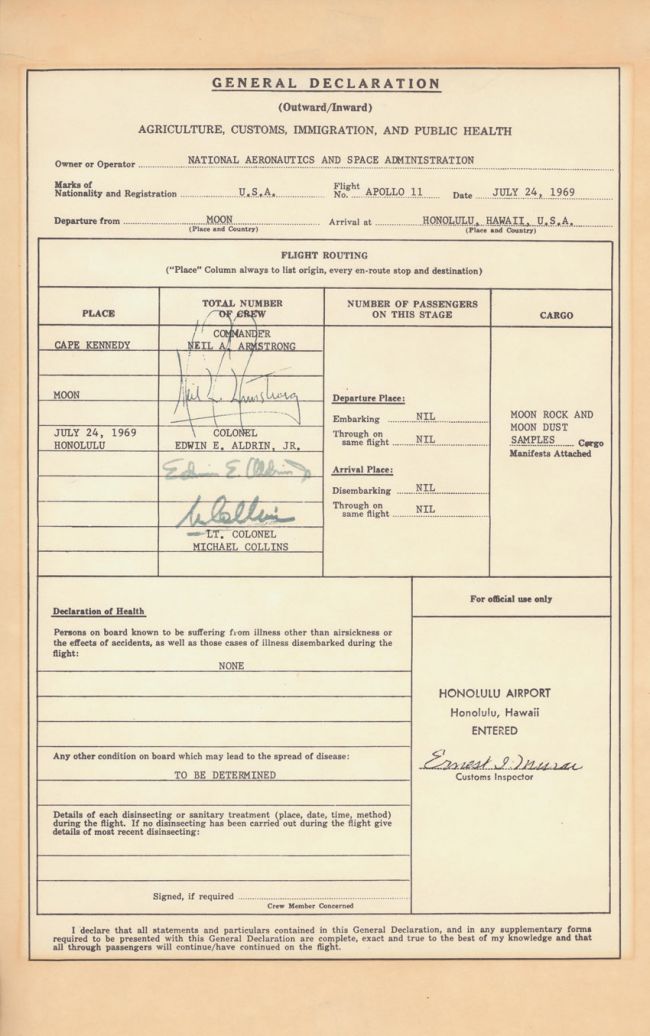 A copy of the U.S. Customs form filled out by Apollo 11 astronauts Neil Armstrong, Buzz Aldrin and Michael Collins after their return to Earth on July 24, 1969.

Before the ticker tape parades and the inevitable world tour, the triumphant Apollo 11 astronauts were greeted with a more mundane aspect of life on Earth when they splashed down 50 years ago today (July 24) — going through customs.

Just what did Apollo 11 astronauts Neil Armstrong, Buzz Aldrin and Michael Collins have to declare? Moon rocks, moon dust and other lunar samples, according to the customs form filed at the Honolulu Airport in Hawaii on July 24, 1969 — the day the Apollo 11 crew splashed down in the Pacific Ocean to end their historic moon landing mission.

The customs form is signed by all three Apollo 11 astronauts. They declared their cargo and listed their flight route as starting Cape Kennedy (now Cape Canaveral) in Florida with a stopover on the moon.

The form was posted to the U.S. Customs and Border Protection website in 2009 to mark the Apollo 11 mission's 40th anniversary. A copy was obtained by Space.com at the time and verified by NASA.

"Yes, it's authentic," NASA spokesperson John Yembrick told Space.com. "It was a little joke at the time."

It's more humor than fact, because Apollo 11 splashed down 920 miles (1,480 km) southwest of Hawaii and 13 miles (21 km) from the USS Hornet, a Navy ship sent to recover the crew. It took two more days for the astronauts to actually return to Hawaii on July 26, where they were welcomed with a July 27 ceremony at Pearl Harbor.

The catch? The astronauts were trapped inside a NASA trailer as part of a quarantine effort just in case they brought back any germs or diseases from the moon. They even wore special biological containment suits when they walked out on the deck of the USS Hornet after being retrieved.

NASA transported them to Houston, quarantine trailer and all, and they emerged from isolation three weeks later. (Nowadays, astronauts returning from space exit their spacecraft almost immediately, though some long-duration astronauts receive medical checks after spending months in weightlessness.) 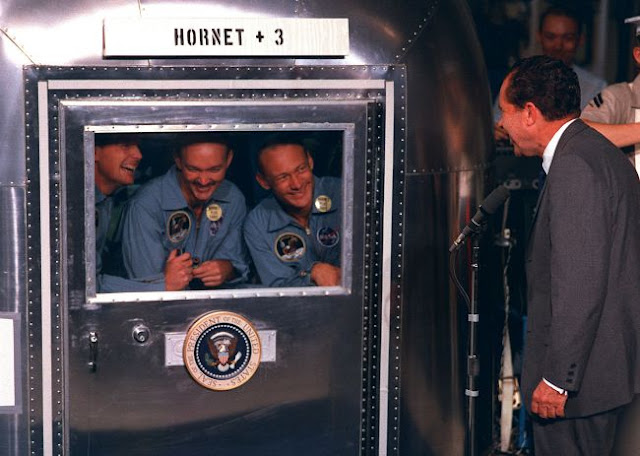 President Richard Nixon welcomes the quarantined Apollo 11 astronauts aboard the USS Hornet after they splashed down in the Pacific Ocean on July 24, 1969.

Today, NASA astronauts still have to go through customs, but for more conventional reasons.


Astronauts on missions headed for the International Space Station must train not only in the U.S., but also in Japan, Canada, Europe and Russia in order practice with the different systems, modules and tools they'll use while visiting the outpost, which is the product of 20 years of space construction by 16 different countries.

No matter what the mission, even astronauts have to go through customs, NASA officials said. As part of their routine airline flights to other countries and back, they of course encounter airport customs.

"They do have a government passport, but they do have to go through customs," NASA spokesperson Nicole Cloutier-Lemasters told Space.com. "Just like the rest of us."