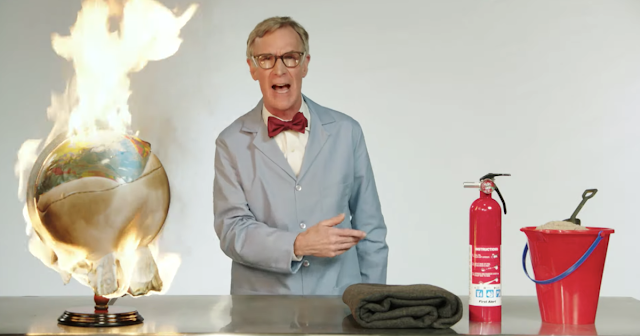 Bill Nye deviated from his kid-friendly "Science Guy" persona  to help John Oliver talk about the severity of climate change. Nye proved he's not always the mild-mannered nerd millennials grew up with when he joined Oliver during his episode detailing carbon pricing and the Green New Deal.

Oliver first outlined the case for the Green New Deal, the environment and jobs proposal introduced by Rep. Alexandria Ocasio-Cortez. "To its eternal credit, the Green New Deal has succeeded in getting people talking, but that won't mean anything unless that talk turns into action," Oliver said.

"We're going to need a lot of different policies working tandem, and we have to take action right now," the comedian said, towards the end of the segment. "But you don't have to just take that from me. Instead, I'm happy to say Bill Nye has actually agreed to drive the urgency home at this point by actually doing one of his enjoyable, lighthearted demonstrations."


After the tongue-in-cheek introduction, Nye gave a demonstration that was much less lighthearted — and used much stronger language — than usual.

"By the end of this century, if temperatures keep rising, the average temperature on earth could go up another 4 to 8 degrees," Nye said. "What I'm saying is, the planet's on f****ing fire." The Science Guy then took a blowtorch to a globe, setting it ablaze.

"There are several options to put out the proverbial fire on Earth," Nye explains. "Are any of them free? No, of course not, you idiots. Grow the f*** up. You're adults now."

As the globe burns, he declares: "I didn't mind explaining photosynthesis to you when you were 12, but you're adults now. This is an actual crisis, got it?" Nye's expletive-laden rant was received with laughter from the audience. Oliver ends the episode by joking that he's "absolutely on board" with Nye's "gritty reboot."

The tough-talking version of Nye gained widespread attention online and he quickly became a trending topic on Twitter.

"Bill Nye is not the one we used to know! He means business," one person tweeted.

"A VERY important, VERY science-forward message from Bill Nye: 'The planet is on f*ck!ng fire.' Needless to say, Bill understands how dire it is that we turn things around for our planet. It's the only one we've got!" another person wrote. Several jokingly posted "Bill Nye 2020."

Not only did Oliver memorably drive home his point about climate change and the Green New Deal, but he also proved that one way to get through to millennials is work with the same Science Guy who got them interested in the world of science when they were kids.