Bitcoin expert scams a scammer, donates the money to charity 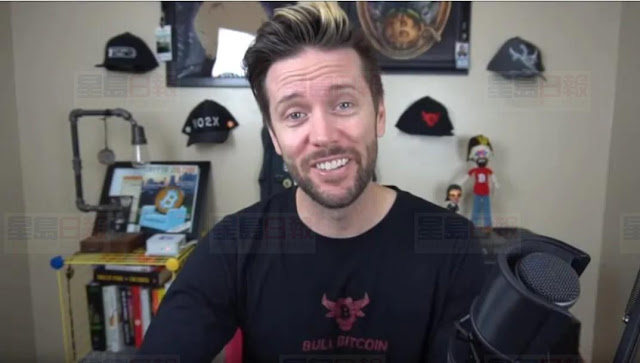 Ben Perrin of Calgary says he recently tricked someone who was trying to bilk him out of his cryptocurrency, and donated the results to charity. (Ben Perrin/BTC Sessions, YouTube)

Financial fraudsters often try to target the elderly or otherwise vulnerable — but one recently picked the worst possible target.

Calgarian Ben Perrin runs an educational YouTube channel focused on teaching people about bitcoin and cryptocurrency, and is the marketing director for a bitcoin exchange.

Working in the cryptocurrency industry means he's been targeted by hopeful scammers before. But when one slid into his Instagram inbox on Monday, offering to double his investment if he'd just send thousands of dollars worth of bitcoin, Perrin says he decided to have some fun.

"I've come across a lot of these people before, they make ridiculous claims," Perrin told CBC News. "In this case, every 24 hours, they guaranteed me a doubling of my bitcoin, and said that if I would just send them some bitcoin I could start seeing returns."

"So, I played along and pretended to be a newcomer to bitcoin, not understanding what was going on."

Perrin didn't just play along — he faked a bitcoin wallet statement, and even pretended he had been contacted by someone else with a better offer.

Then, he went all in.

"I said that I would gladly invest $20,000 with them if they would simply send me $100 back, I could then return it to them, just to ensure that everything was legit."

The scammer met Perrin halfway and sent $50 US.

Perrin then dropped the bluff, called the fraudster out, and let them know he donated their money to charity. He sent the money to Bitcoin Venezuela, which helps people there buy food using the cryptocurrency, as the Venezuelan bolivar has collapsed.

CBC News has seen documentation for the $50 transfer and the donation that followed. The Instagram account the scammer was using has since been deleted. 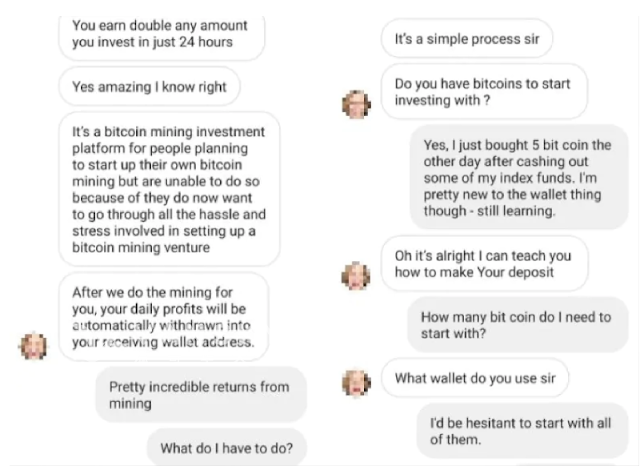 When Perrin received this message that seemed too good to be true, he decided to play ignorant and string the scammer along. (Ben Perrin/BTC Sessions)

Perrin hopes this acts as a good reminder to not send money over the internet, especially to a stranger, unless you know what you're doing.

"A good rule of thumb is your investment, the amount of capital that you are allocating to something like this, should directly reflect your understanding of the asset you're investing in," he said.

Scammers, he says, take advantage of the fact that bitcoin transfers, like money, are irreversible.

"Once you send it, you cannot reverse that. Much like when you give someone a stack of $20 bills. You can't get that back unless you ask nicely and odds are if you're dealing with a scammer, they're not going to do that," he said. 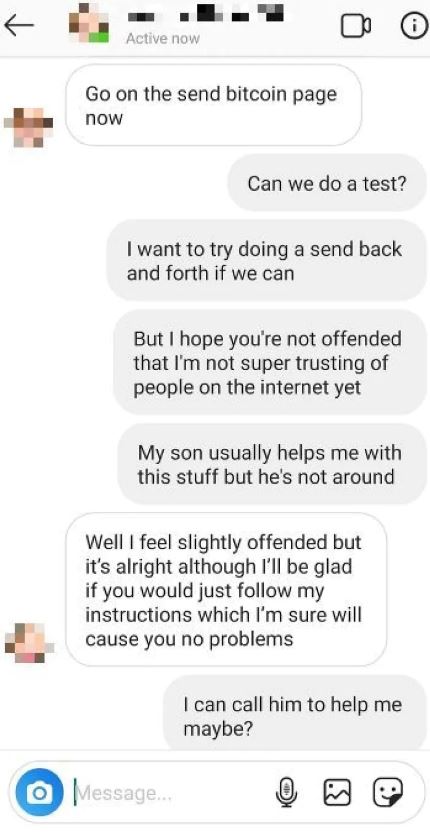 Perrin convinced the scammer to send him money, by promising he would send it back and invest even more. (Ben Perrin/BTC Sessions)

Police would not comment on the case, and they don't recommend trying the same response.

"We don't encourage anyone to engage, talk with, try and rile up these scammers or fraudsters. You could potentially be creating a target for yourself, where they may become frustrated with you and they already know your phone number or they already know your email," said Sgt. Matt Frederiksen of the Calgary police economic crime unit fraud team.

"Once you recognize that it's a scam … don't respond."

People who believe they've been scammed should contact the non-emergency number for the local police, Frederiksen said. Those who have received a suspicious message can report it to the Canadian Anti-Fraud Centre.

Cryptocurrency fraud can be tricky to investigate, as the operations are often international. But police say they are having a big impact in Calgary.

Frederiksen said police receive about 13 to 14 reports every day from fraud victims, adding that in 2019 there have been 21 occurrences of fraud through cryptocurrency payments, totalling just under $1 million in losses.

Perrin said while this instance worked out, he doesn't plan on becoming the Robin Hood of avenging bitcoin fraudsters.

"I definitely am not going to be, you know, dedicating full time to scamming the scammers or anything like that. But there is value in letting newcomers know how this technology works and advising them to exercise caution."