No Comments
Brazilian President Jair Bolsonaro said Tuesday that he will accept the offer of international aid to help fight the fires raging across the Amazon rainforest, but that French President Emmanuel Macron must first apologize to him. 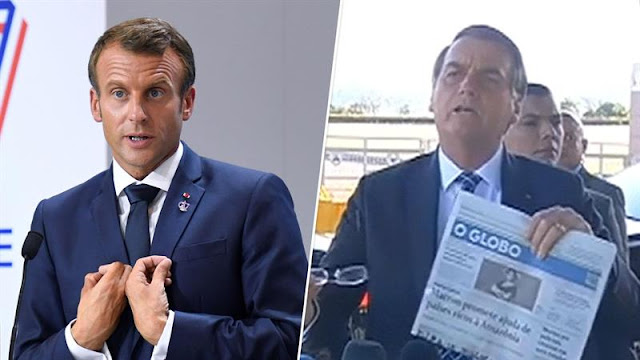 Bolsonaro appeared offended by Macron's comments related to his handling of the unfolding crisis in the Amazon, and wanted them retracted.

"And then we can speak," he said, according to The Associated Press.

The Brazilian leader's demand for an apology follows Macron lashing out after a Bolsonaro supporter mocked Macron's wife, Brigitte, in a Facebook post, comparing her to Bolsonaro's wife, Michelle, and suggesting Macron was jealous.

Bolsonaro commented on the post in Portuguese, "don't humiliate the guy ... haha," leading Macron to respond during the Group of Seven summit on Monday that the comment was "very disrespectful."

"He said very disrespectful things about my wife. I have great respect for the Brazilian people and can only hope they soon have a president who is up to the job," Macron said.

Macron did not immediately respond to Bolsonaro's conditions for accepting the money, worth roughly $20 million and pledged Monday during the G-7 summit in France. In addition, Britain said it would donate $12 million and Canada another $11 million as part of the effort.

G7 pledges millions in the battle against fires raging in Amazon
Earlier, Brazilian officials balked at the offer, with Bolsonaro's chief of staff, Onyx Lorenzoni, telling the nation's news outlet G1 that "we appreciate it, but maybe these resources would be put to better use reforesting Europe."

Lorenzoni also took a swipe at Macron, who has sought to bring attention to the fires in the Amazon and tweeted last week that "it is an international crisis."

Macron "can't even prevent a foreseeable fire in a church that is a world heritage site," Lorenzoni said Monday, referring to the massive blaze that damaged the Notre Dame Cathedral in Paris in April.

Brazil's ambassador to France, Luís Fernando Serra, echoed the sentiment Tuesday on French national television, saying in an interview that "we refuse the aid because we see interference" and it was "help we did not ask for."

The Bolsonaro government's earlier refusal came as no surprise after the populist president and Macron exchanged critical tweets last week. Bolsonaro has accused Macron of striking a "sensationalist tone" and condoning a "colonialist mentality."

Brazil is a former Portuguese colony. Bolsonaro also suggested that Western nations appear motivated by the resources that the Amazon provides.

"Look, does anyone help anyone ... without something in return? What have they wanted there for so long?" Bolsonaro said.

His statement came as Brazil's environment minister, Ricardo Salles, earlier said that any aid was welcome.

Macron on Monday assured Bolsonaro that the international offer comes with only good intentions.

"We respect your sovereignty. It's your country," he said, according to the AP. But "the Amazon forest is a subject for the whole planet. We can help you reforest. We can find the means for your economic development that respects the natural balance. But we cannot allow you to destroy everything."

The Amazon rainforest, which sprawls across nine countries and is the largest rainforest in the world, has been burning at a record rate, according to Brazil's National Institute for Space Research. More than 74,000 fires have been observed in Brazil alone this year, almost double the total for 2018.

Bolsonaro, who took office in January, has faced a backlash for rolling back environmental protections that have paved the way for the illegal clearing of forests in favor of cattle farming and agriculture. Last week, he posted a video to Facebook blaming nongovernmental organizations for setting the blazes as a tactic to malign him, although he provided no evidence for the claim.

Environmentalists say preserving the Amazon is essential because deforestation only exacerbates the effects of climate change, leads to the loss of biodiversity and could threaten rainfall patterns across the globe.

President Donald Trump on Tuesday defended Bolsonaro's efforts and tweeted that he has the backing of the United States. Bolsonaro "is working very hard on the Amazon fires and in all respects doing a great job for the people of Brazil - Not easy," Trump wrote Tuesday.