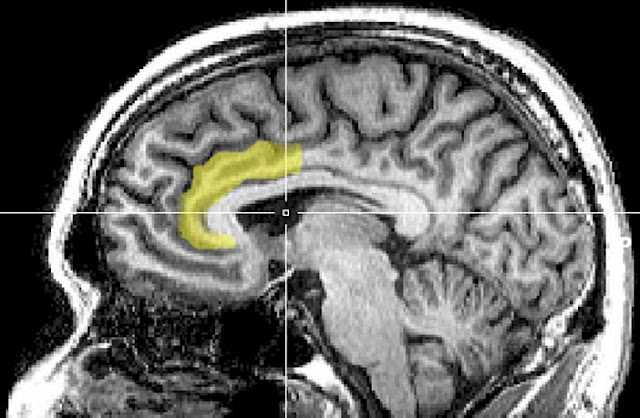 Cannabis use is associated with reduced brain volumes in a region involved in facial emotion processing, according to a new study in Psychiatry Research: Neuroimaging.

“There is a high rate of overlap between regular (at least weekly) cannabis use and mood disorders such as depression and anxiety,” said study author Kristin E. Maple, a doctoral candidate at the University of Wisconsin-Milwaukee.

For their study, the researchers used MRI scans to compare the brain structure of 20 cannabis users to 35 non-users. (Cannabis users were required to have at least 40 uses in the past year.) The participants also completed computerized psychological tests of facial emotion recognition.

“Adolescents and young adults who use cannabis weekly have abnormal brain structure in the rostral anterior cingulate cortex (rACC), a region involved in processing and regulating emotions,” Maple told PsyPost.

“These rACC structural abnormalities are related to difficulty noticing subtle differences in facial emotions, even after three weeks of abstinence from cannabis. This emotion processing deficit could be one reason why many people who regularly use cannabis also have mood disorders (e.g., depression or anxiety).”

The design of the study, however, prevents the researchers from determining the direction of causality.

“The study was cross-sectional, which means we don’t know whether abnormalities in the rACC make someone more likely to use cannabis, or whether regular cannabis use leads to abnormal rACC structure,” Maple explained.

“Longitudinal studies such as the Adolescent Brain and Cognitive Development (ABCD) study are needed to determine whether regular cannabis use actually changes rACC structure, leading to problems with emotional processing.”