No Comments
The super energetic gamma rays originated thousands of light-years away, and scientists still aren't exactly sure what generated them. 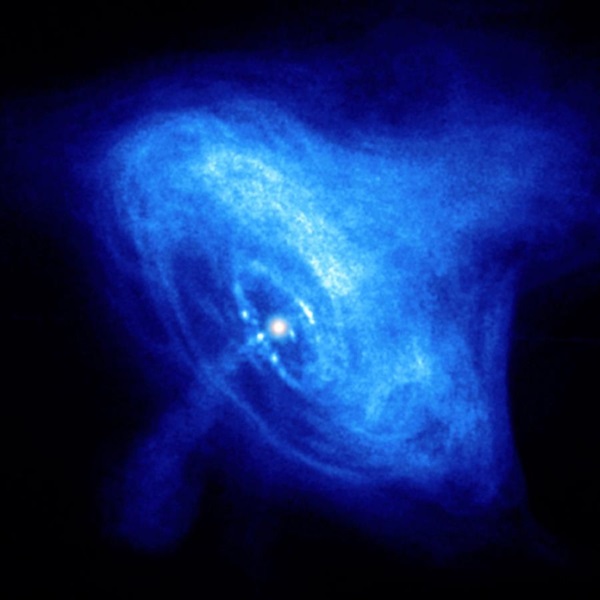 This image of the Crab Nebula in x-rays shows the pulsar clearly spinning at the nebula’s center.
NASA/CXC/ASU/J. Hester et al.

Astronomers using the Tibet AS-gamma Experiment have discovered the highest-energy light ever measured from an astrophysical source. Photons streaming from the Crab Nebula were recently measured at energies well over 100 tera-electronvolts (TeV). That’s a trillion electron volts, or some 10 times the maximum energy that the Large Hadron Collider sees when it slams particles together.

Scientists think the key is a pulsar lurking deep inside the heart of the Crab Nebula, the dense, rapidly spinning core left when a star exploded in a supernova almost a thousand years ago. Actually, since the nebula is located over 6,500 light-years away, the explosion occurred about 7,500 years ago, but the light from that explosion didn’t reach Earth until 1054 CE, when it exploded in our night skies as a bright new star, spotted by astronomers around the globe.

The supernova’s light faded after just weeks, but since then, the detritus has grown and spread, and it now glows wonderfully in the night sky at nearly every wavelength. It crackles in low-energy radio waves, blasts out high-energy gamma and x-rays, and shines at visible wavelengths in between.

But this ultra-high-energy light is new even for the Crab Nebula. Researchers from China and Japan published their findings in Physical Review Letters on July 29.

It’s difficult for high-energy photons like gamma rays to actually make it past Earth’s atmosphere. Instead, when gamma rays slam into air particles, they usually scatter into a shower of other particles. But astronomers have learned to search for these showers, usually with arrays spanning miles, since by the time these showers reach the ground, they may be spread out over a large area. Tibet AS-gamma combines 597 detectors scattered across 65,700 square meters on the surface. About 8 feet under this array sit 64 concrete barrels filled with water that serve as complementary detectors.

The larger array on the ground lets scientists trace the direction and energy of a high-energy event. The water detectors complement these observations by tracking the specific signature of such events. This allows researchers to distinguish gamma-rays from high-energy cosmic rays, which can produce similar showers of particles, even though cosmic rays are made of particles like protons and electrons, instead of photons.

Researchers collected data from both detectors in tandem from February 2014 until May 2017, and found a total of 24 events greater than 100 TeV that they could trace to the Crab Nebula. Some of the events reached a whopping 450 TeV. Separating the gamma ray events from the cosmic ray events isn’t a perfect science, so the researchers estimate that five or six of their observations were actually background cosmic rays. But the rest should be real, a sign of the powerhouse that lurks inside the Crab Nebula.

Very high-energy particles wouldn’t be good for humans if they actually struck us, but since they splinter into a cascade of other particles, there’s no danger from the Crab Nebula’s radiation on Earth.

It’s not totally clear how the Crab Nebula manages to charge up these gamma rays to such high energies. The pulsar at the nebula’s heart spins and sends out a powerful stellar wind, as well as generating powerful magnetic fields, which can accelerate these particles to high speeds, increasing their energy.

It’s not clear whether there’s a maximum energy scientists can expect. The new observations hint at the next challenge: finding petaelectronvolt gamma rays, those with 1,000 TeV worth of energy.

Tibet AS-gamma will keep looking. But considering it takes a few years to analyze the massive amounts of data the array collects, it’s possible such a signal has already been recorded, and is simply waiting to be sifted out of the noise.