Dog sitter caught on camera slamming puppy onto the floor 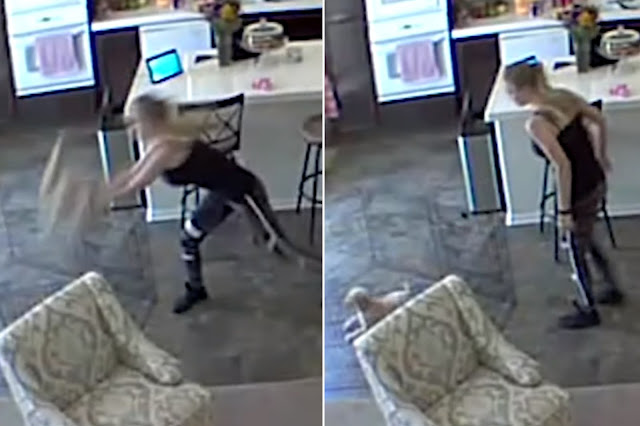 A cold-hearted dog sitter was caught on live video slamming a 10-week-old golden doodle to the floor, leaving the puppy whimpering and struggling to get up.

Bryce and Amanda Horton were horrified when they saw the unidentified female sitter forcefully drop their pooch, Lucy, into her pen at their Victorville, California, home Saturday, KTLA reported.

“I saw it on the camera live, she was still standing there. That’s when I talked to her through the camera, told her, ‘Hey, I saw what you did to the dog. You need to get your stuff and get out of the house,'” Bryce told the station.

The video shows the dog struggling to get on all fours, while the sitter stares at it.

The sitter — who was hired through the popular dog website Rover — apparently didn’t realize there was a camera recording her every move.

Lucy was checked out by a veterinarian and miraculously didn’t suffer any bruises or broken bones despite the hard landing.

“The vet made the comment, ‘She must have bones made of rubber’ ’cause she threw her down hard for a puppy that’s that young,” Bryce said.

He said the sitter’s excuse was that she got “frustrated.”

“I don’t understand. She had only been there for maybe 15 minutes,” Bryce said.

Rover said it has nixed the woman’s profile from its site and is cooperating with authorities. It also offered to pay the Hortons’ vet bills.

“The activity depicted in this video is shocking and appalling. We have permanently deactivated this sitter from our platform and will continue to investigate. Any incident of this nature is extremely rare on our platform, and we take it very seriously,” said spokesman Dave Rosenbaum.

San Bernardino County Animal Control has launched an investigation that could lead to criminal charges.

“I understand that people mess up but something like that, you just can’t do that kind of thing,” said Bryce.