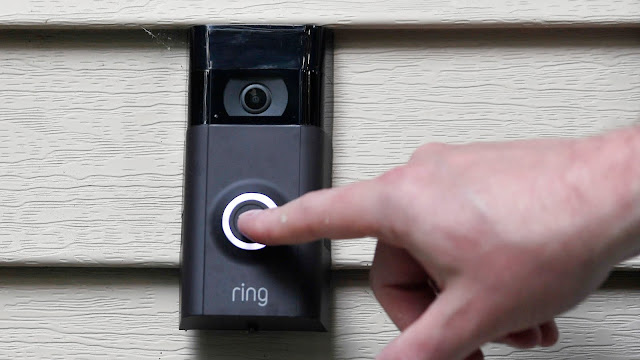 Amazon’s home security company Ring has garnered enormous control over the ways in which its law enforcement partners are allowed to portray its products, going as far as to review and even author statements attributed to police in the press, according to emails and documents obtained by Gizmodo.

This summer, Ring even urged a Florida police department to delay announcing its partnership with the company for weeks, telling officials that it preferred to keep the spotlight on a separate initiative launched by the city, designed to incentivize the purchase of its home surveillance products.

Ring declined to reveal how many police departments it is currently serving, but according to one police memo dated April 22, 2019, “over 225 law enforcement agencies” are engaged in partnerships with Ring, which was snatched up by Amazon in April last year. Through these contractual relationships, Ring grants police access to an online platform—or “portal”— which can be used to acquire video footage captured by Ring’s doorbell surveillance cameras. However, the footage can only be obtained with the permission of the device’s owner, who must also be a user of the company’s “neighborhood watch app,” called Neighbors.

When police issue a request for footage, Ring sends out an alert to customers in the vicinity, asking them to “share videos” captured by their doorbell cameras during a specific period of time. Users can also opt-out of these alerts and even review their videos before deciding whether or not to send them to police. The alerts also contain a disclaimer informing users that the decision to share footage is entirely voluntary: 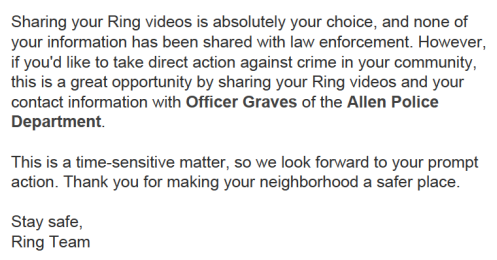 Because there are already thousands of Ring users in major cities across the U.S., one of Ring’s primary goals in its police partnerships is encouraging existing customers to download Neighbors. To ensure that police stay on message when promoting the app, or answering questions about it, Ring not only provides police departments with talking points but widely seeks to secure contracts that grant it the absolute right to approve all police statements about its services.

Contracts and other documents obtained from police departments in three states show that Ring pre-writes almost all of the messages shared by police across social media, and attempts to legally obligate police to give the company final say on all statements about its products, even those shared with the press. (In exchange, police are also given the ability to approve any Ring press releases that directly reference the partnering police agency.)

“Ring requests to look at press releases and any messaging prior to distribution to ensure our company and our products and services are accurately represented,” the company told Gizmodo in an email.

For nearly three weeks in June, the Boca Raton Police Department was engaged in a partnership with Ring that went publicly unreported. The delay in announcing the city’s deal with Ring occurred at the company’s request. Emails show that Ring was interested in keeping the public’s attention focused on a separate subsidy deal it struck with the city designed, according to the city’s press release, to “incentivize the purchase of Ring Video Doorbells and Ring security devices.” (Two hundred residents were slated to receive $100 discounts on Ring doorbell cameras.) Keeping the department’s use of the portal under wraps, a Ring representative said, would help give the subsidy program “full public attention and greatest chance for success.” 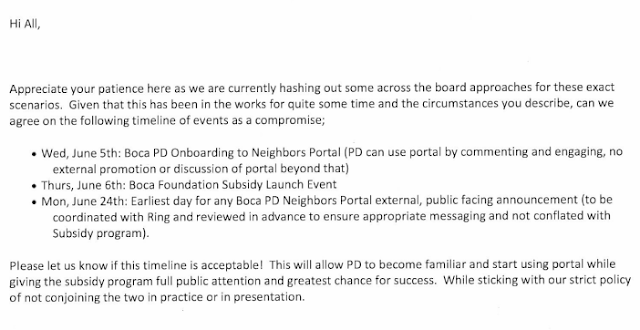 Ring initially sought to delay announcing the partnership for 50 days. Boca Raton pushed back on the idea, however, settling on a date nearly three weeks after the partnership was formalized. (A Boca Raton Police Department official argued in a May 31 email that July was a terrible month to announce the partnership because the city was typically a “ghost town” during that month and added that the “chief is really into doing this sooner than later.”) In the meantime, Ring issued strict instructions to the department: “no external promotion or discussion” regarding its use of Ring’s law enforcement portal.

Ring said in a statement that its subsidy programs are different than those it enacts directly with law enforcement. “Because these programs are negotiated and implemented separately, we strive to also keep communication around these programs separate,” it said. “This helps residents clearly understand each program, their benefits, and their unique differences.”

When police departments do eventually go public about partnering with Ring, the announcements are invariably scripted almost entirely by the company itself. Last Thursday, Motherboard reported, for example, that police in Lakeland, Florida, signed an agreement not to issue any public statements about the partnership unless they are first vetted by the company. This practice appears to be widespread.

Gizmodo found that similar language—“The parties shall agree to a joint press release to be mutually agreed upon by the parties”—was included in Ring documents signed by multiple police departments, including those in Fort Lauderdale, Florida, and Frisco, Texas. Motherboard also reported that the Lakeland contract required police to “encourage adoption of the platform/app” and stipulated that police “keep the terms of this program confidential.” Two different agreements reviewed by Gizmodo contained the exact same language.

In Boca Raton, however, city attorneys Thomas Collery and Joni Hamilton refused to accept the terms and managed to get them amended, noting, for example, that Ring’s conditions would run afoul of Florida’s public records laws. The phrase “Unless otherwise required by law, including, but not limited to, public records laws” was added to the agreement Boca Raton ultimately signed. It was also altered to remove the requirement for a “joint press release,” with the city opting instead to give each party the right to approve the other’s individual statements.

Collery said in a January 9, 2019, email to Hamilton that the original language in Ring’s contract regarding press releases “would seem to only have value to Ring in terms of advertising.”

Ring appears to take full advantage of the privilege granting it power over police statements. The company actively crafts various types of messages that, to the general public, are seemingly written by the police themselves. Through records requests in California, Florida, and Texas, Gizmodo obtained details about Ring’s so-called “press packets” issued to partnering agencies. These include a “Press Release Template,” “Social Media Templates,” and “Key Talking Points,” as well as high-resolution Ring and Neighbors App logos “to incorporate with PR materials as needed.”

What’s more, the packets are accompanied by instructions dictating that final drafts of public remarks must be sent to Ring so that the company’s PR team can “review and sign off” before they’re sent to local news outlets. The social media templates, which Gizmodo obtained from the Frisco Police Department, are also widely in use. No fewer than 33 police departments have copied and pasted Ring’s suggested tweet asking residents to “Join us by downloading the free ‘Neighbors’ app.” 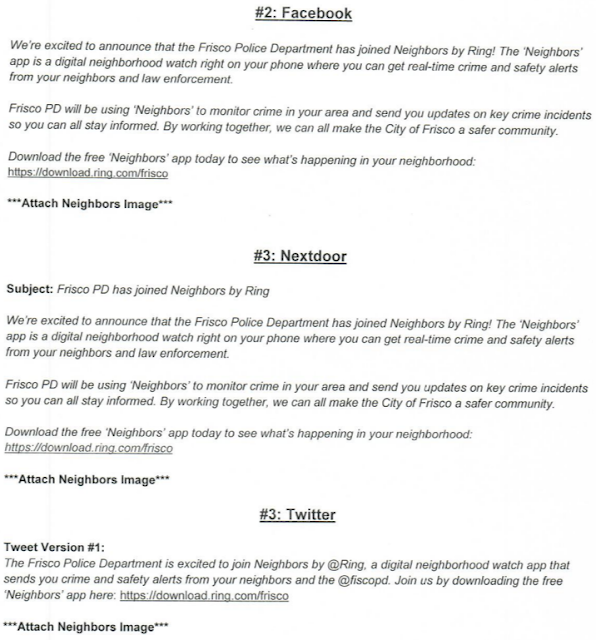 “Ring provides sample social media content for police departments to utilize at their discretion to inform their jurisdictions about their partnerships with Ring,” the company said.

In an April 2018 email, a senior Florida police officer states that there are roughly 20,000 Ring subscribers living in Fort Lauderdale, where Ring launched one of its earliest police partnerships. He then describes a deal brokered between Ring and the department: For every 2,000 new Neighbors subscribes they bring in, Ring will give police 100 free devices. The officers themselves are also targeted as potential customers, with company reps handing out $50 “law enforcement discount” codes that, supposedly, can only be redeemed using a city email address.

Some police officials seem conscious of the fact that their officers shouldn’t be seen as advertising on behalf Ring, though they’re effectively doing so anyway. One Florida officer wrote in an email to his subordinates last year: “Officers are NOT sales reps for RING and need to be careful not to suggest this company over other competitors.” He then openly admits, “We want to encourage downloads of the app.”

One way Fort Lauderdale encouraged its citizens to use the Neighbors apps was by handing out free Ring devices at neighborhood watch meetings. Police officers attended the meetings and held free raffles where they pulled residents’ names from a hat. But the officers were instructed not to let the winners simply walk away with their new device. Instead, they were ordered to ensure that the recipient had downloaded Ring’s app—“as far as practicable”—and then install the device themselves.

But accepting a police department’s offer of a free surveillance device apparently does have its drawbacks. For instance, it seems unlikely that the winners were warned the personal information they gave to police would consequently be exposed by police. In response to Gizmodo’s request, the Fort Lauderdale Police Department recently handed over a list of dozens of the city’s new Ring doorbell owners—along with where they live, the MAC addresses of each of their devices, and how to reach them by email or phone.

Ring was quick to dismiss the incident as not a result of its police partnership. “Customers choose what information, if any, they share with law enforcement,” a spokesperson said. “In this instance, residents chose to provide their information directly to Fort Lauderdale PD.”