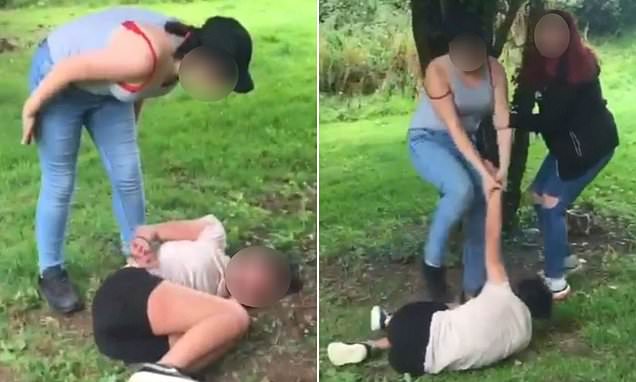 This horrific footage shows a teenager kicking and punching another girl as she begs for somebody to call her father.

Video shows the victim being pulled to the ground where she is repeatedly struck in the head and body.

The assault on August 3 in Birmingham is so vicious that at least one onlooker tries unsuccessfully to pull the attacker away.

The clip, believed to have been recorded in Ley Hill Park, was obtained by the victim's uncle, who posted it to social media with the caption: 'I want to name and shame this girl because police not doing anything as usual.

'I wasn't going to put this up but the girls are threatening her every night saying they were going to stamp on her head, and come down to my house and family business causing more trouble, and police can't do anything because she is a minor.'

The teenager can be seen dragging the girl to the floor in shocking footage that was taken in Birmingham, West Midlands

He added: 'They could start with taking that bloody phone if she is making threats. If you look at the video my niece isn't even fighting back. It's the six week holiday and she's not even allowed out because of these vile kids.

The horrific clip shows the attacking girl taking her jumper off when and appears to say: 'Should I bang her now?'

Suddenly the attacker pounces on the other teen, hitting her in the face while mimicking her victim's pleas of: 'Ring nan you f***** b****!' The victim curls up in a ball as she tries to protect herself.

The other teens try to get the attacker to stop. However, the girl drags the other teen by her hair and says: 'Na I ain't f****** done with her.' And slaps her across the face.

Michael Hartley responded online: 'If you bullied any of my family like that, then let's just say people would be getting visits.' Ang Farrant added: 'Oh my god, I hope the poor girl is ok.

'I've shared it, these bullies need catching, even though only one was violent, the others not only stood by and watched for a while but recorded it too, scum.'

Leanne Law wrote: 'What a scruffy little b****** if someone ever did that to any of my daughters I'd make sure their feet wouldn't touch the ground again.'

According to the family of the victim, speaking today, the attacker showed her victim a picture of a boy, not letting on it was her deceased brother. When the victim made an unkind comment, the attack was launched.

A family member said: 'Police are saying it's word of mouth. It's disgusting they ain't doing nothing.'

The family claim a number of items were stolen from the victim and that police brought only some of these back.

West Midlands Police said they could not comment without details of where and when the incident happened. When provided with these they claimed to have no record of the incident.