Kid Rock: Taylor Swift ‘Wants to Be a Democrat Because She Wants to Be in Movies’ 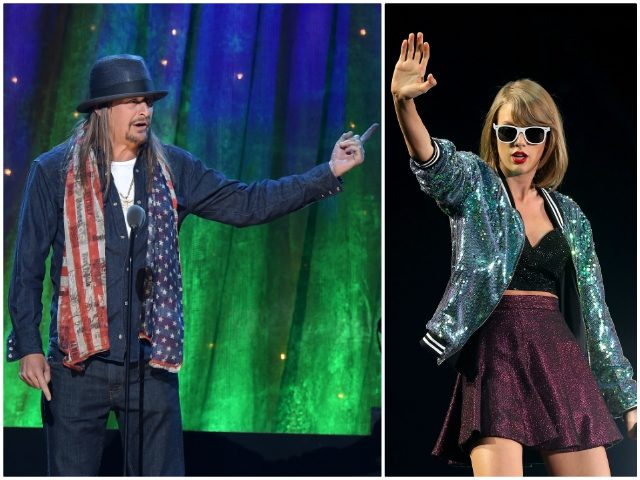 Detroit rocker Kid Rock says pop superstar Taylor Swift has only aligned herself with the Democratic Party because she hopes to be cast in Hollywood films.

In a detailed interview with Vogue published on Thursday, the 29-year-old singer reaffirmed her progressive credentials by discussing her support for the LGBT movement and declaring that “rights are being stripped from basically everyone who isn’t a straight white cisgender male.”

Kid Rock, whose real name is Robert James Ritchie, says Swift is only pushing such progressive ideas because she wants to curry favor with Hollywood’s notoriously left-wing power players.

“Taylor Swift wants to be a democrat because she wants to be in movies….period,” said Kid Rock. “And it looks like she will suck the door knob off Hollyweird to get there. Oldest move in the book. Good luck girl.”

Taylor Swift wants to be a democrat because she wants to be in movies….period. And it looks like she will suck the door knob off Hollyweird to get there. Oldest move in the book. Good luck girl.

With many of her fans suspecting her of being a Republican or Independent amid her longstanding refusal to publicly discuss politics, Swift broke her silence last year when she provided a hackneyed endorsement of Democratic candidate Phil Bredesen over Republican Marsha Blackburn in the Tennesee Senate race.

In a long Instagram post, she accused Blackburn of being “[un]willing to fight for dignity for ALL Americans, no matter their skin color, gender or who they love,” while also decrying the “systematic racism” of American society.

The “Shake It Off” singer even went so far as to compare herself to Hillary Clinton, telling Vogue that she didn’t endorse the failed 2016 presidential candidate because Donald Trump was successfully weaponizing the concept of “celebrity endorsements” and would portray the pair as “the two nasty women.”

“She knows how to play guitar and she writes her songs so God bless her. I wish there was more of that out there,” he told People in 2010. “Hopefully she gets better and grows and keeps it all going.”