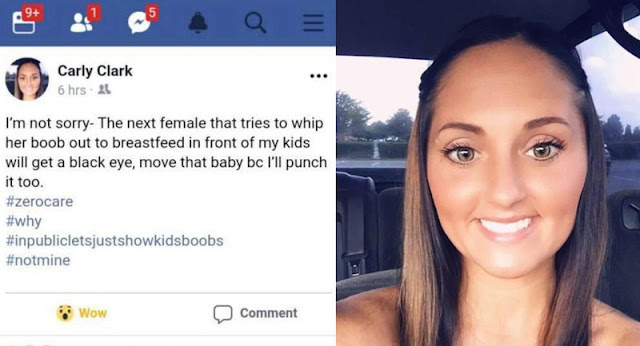 One mom is getting slammed on social media for threatening to punch breastfeeding women and their babies in a viral Facebook rant. In a post from July 2018 that has since been taken down, Carly Clark wrote, “I’m not sorry – the next female that tries to whip her boob out to breastfeed in front of my kids will get a black eye, move that baby [because] I’ll punch it too #zerocare #why #inpublicletsjustshowkidsboobs #notmine.”

Not surprisingly, the Spartanburg, S.C. pet groomer’s remarks were met with a lot of outraged responses from breastfeeding moms. Jessi Vogel, 25, was just one of many who responded. She commented, “To see another woman with kids say that she’s willing to give the woman a black eye for feeding in front of her children – it really takes us a step back to have other women saying this.”

Another upset mom added, “What in the actual hell??! How do people – especially a woman – still have this kind of mentality???! How ridiculous!! We have been feeding our babies the way our bodies intended since the dawn of time.”

When confronted about her controversial post, Clark refused to apologize, first pointing out that her comment was only directed at one person. She then said, “Do what you want, but I find it very immature that you as a mother would go out of your way to come to a place that you know I work at and breastfeed.”

And she didn’t stop there, adding, “[I don’t care] who breastfeeds when my kids aren’t around. Pulling your boob out in front of my kids on purpose just to prove a point is simply represented by who you are as a person.”

Moms weren’t the only ones offended by Clark’s rant. Petsense, Clark’s now-former employer, fired her shortly after the event, explaining, “We absolutely would never condone violence such as was recently posted… This individual is no longer employed by Petsense. We sincerely apologize to all of those who have been affected by this situation.”