No Comments
The ongoing fires are the most active in Brazil since the year 2010. 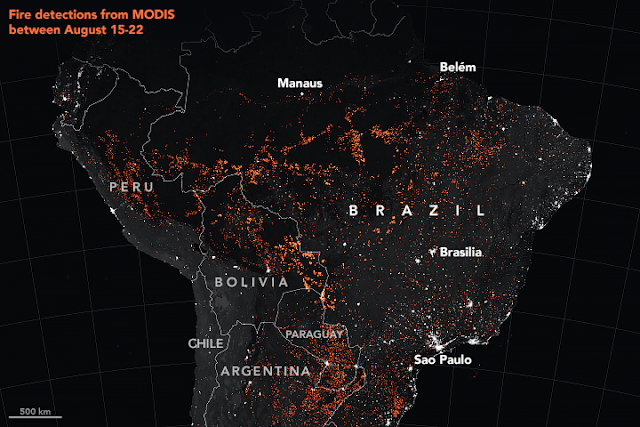 This map shows active fire detections in the Amazon rainforest in Brazil as observed by Terra and Aqua MODIS between Aug. 15-22, 2019.(Image: © NASA Earth Observatory/Joshua Stevens)

As raging fires continue to sweep through the Amazon rainforest in Brazil, NASA satellites and astronauts aboard the International Space Station are tracking the flames from above. Their view confirmed that this is the most active fire year in Brazil since 2010.

Fire detections by NASA's Moderate Resolution Imaging Spectroradiometer (MODIS) on the Aqua satellite have been the highest since the year 2010 so far, with indications that 2019 may hit a record number of fires in the Amazon. NASA has been using MODIS sensors to detect thermal anomalies all over the world since 2003.

The timing and location of MODIS' fire detections during this year's dry season in the rainforest are more consistent with land clearing than regional drought, Douglas Morton, chief of the Biospheric Sciences Laboratory at NASA's Goddard Space Flight Center, said in a statement by NASA.

"MODIS detections are higher in 2019 than at this time last year in all seven states that comprise the Brazilian Amazon," Morton added.

The Amazon rainforest, which provides around 20% of the world's oxygen, has been ablaze for weeks now. The fires have sparked public outcry as environmentalists blame loggers and ranchers for setting the flames in order to open more land to agriculture — serving a massive blow to the ongoing fight against the effects of climate change. 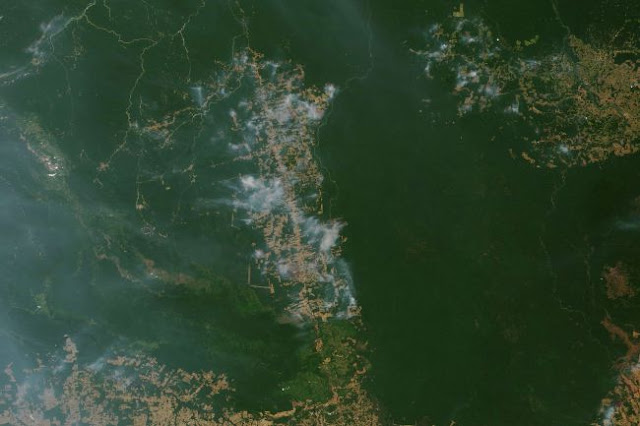 Data from the Atmospheric Infrared Sounder (AIRS) on NASA's Aqua satellite shows a plume of carbon monoxide, a pollutant that stays in the atmosphere for about a month, in the northwest region of the Amazon, spreading toward the south and the east toward Sao Paolo at an altitude of 18,000 feet (5,500 meters), according to a statement by NASA.

The smoke, visible for thousands of kilometres, of tens of human-caused fires in the Amazon forest. #noplanetB #MissionBeyond pic.twitter.com/SyoydfJo39
— Luca Parmitano (@astro_luca) August 26, 2019

Astronauts on board the International Space Station can also observe the smoke engulfing the Amazon from space. European Space Agency astronaut Luca Parmitano tweeted earlier today (Aug. 26) four images that show clouds of smoke hovering over the rainforest. "The smoke, visible for thousands of kilometres, of tens of human-caused fires in the Amazon forest," he wrote.

Leaders at the 45th G7 Summit (an annual meeting of the most economically developed countries in the world) today vowed to provide $22 million toward fire-fighting planes and other relief efforts for the Amazon rainforest, according to BBC. 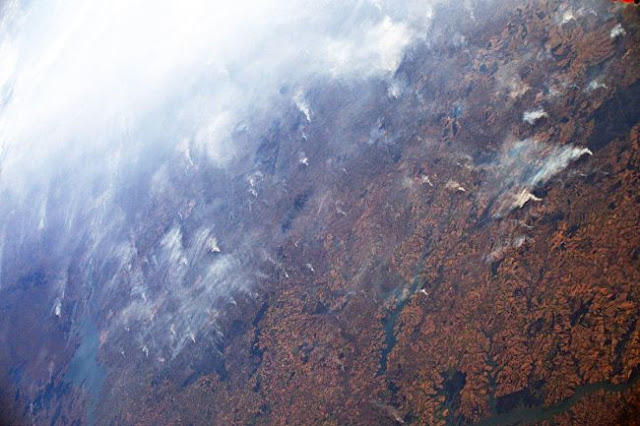 Astronaut Luca Parmitano captured images of the burning Amazon from on board the International Space Station.