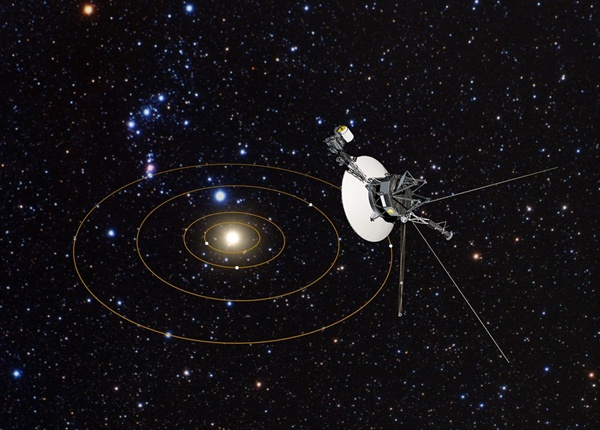 Launched in 1977, Voyagers 1 and 2 are the longest-running spacecraft, still operating at more than 11 billion miles from home, decades after the end of their nominal goal of exploring the outer solar system planets. They still get their power from the same three radioisotope thermoelectric generators, or RTGs, that have served them for years. But with these generators yielding less power every year, the spacecraft have started to flag.

Mission controllers have had to make some tough calls about which instruments to prioritize, and recently made the call to turn off heating for Voyager 2’s cosmic ray instrument. The instrument itself is still functioning for now, despite operating at conditions of negative 74 degrees Fahrenheit, when it was only tested down to negative 49 degrees.

The craft has five functioning instruments remaining, which it still uses to collect data and send back to Earth on its long journey into deep space.

After all these years

The Voyager spacecraft launched in 1977 as twin spacecraft, each with ten instruments to explore space and tour the solar system, sending back humanity’s first close-up look at most of the outer planets.

Voyager 1 visited Jupiter and Saturn before heading for deep space, while Voyager 2 swung by those planets plus Uranus and Neptune, its trajectory carrying it off at a slower pace. But since 1989, both have been exploring the empty space beyond the planets, and returning priceless information about how far the solar atmosphere extends its influence. It was only in 2018 that Voyager 2 officially entered interstellar space, returning information on how the space environment changed as it finally left the Sun’s sphere of influence.

Voyager 2 has five working instruments compared with Voyager 1’s four. Most of them have been switched off intentionally, as the imaging cameras, for instance, are not useful so far from any sunlight or photographical objects. But they are still measuring cosmic rays, magnetic fields and other charged particles that fill interstellar space far beyond the worldly realm of the planets.

By measuring these particles, astronomers are learning just how far the Sun’s energy extends, and how those fields interact with the interstellar medium beyond the solar system’s edges. 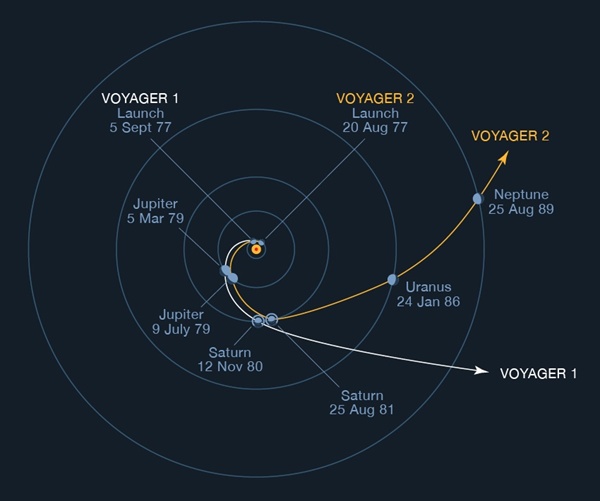 The two Voyager spacecraft took different paths through the solar system, and both have since left the Sun’s influence entirely.
NASA/JPL-Caltech

It’s not just the data-collecting instruments that matter on the Voyagers. For that data to be any use, they must also have working communications equipment and be able to point that equipment toward Earth for transmission. Luckily, their communications equipment is still functional. But the thrusters that allow the spacecraft to point in a particular direction have started to degrade. In 2017, engineers turned on Voyager 1’s older thrusters, ones that hadn’t been used in 37 years. Later this month, they will try the same for Voyager 2 and the thrusters it last used at Neptune in 1989.

The mission managers for Voyager have kept the spacecraft going for decades beyond the ends of their original missions. They have pushed the instruments to new limits, and are proving that these pioneers, aged as they are, can still reveal powerful information about the cosmos. They are the farthest human-made objects in the universe, and they are still exploring and still teaching humanity about our universe. With the mission managers’ continued efforts and any amount of luck, they should continue doing so for years.