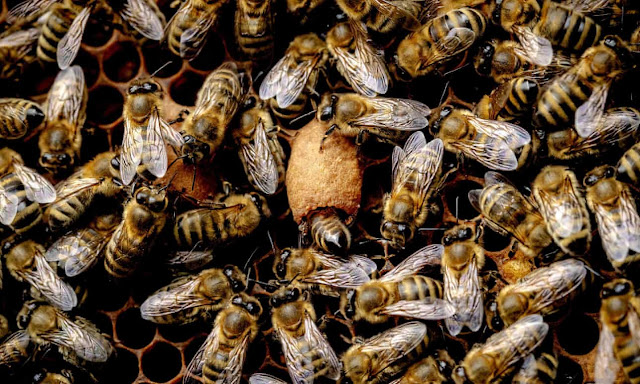 Agriculture in the United States has become 48 times more toxic to insects over the last 25 years, largely due to a controversial, widely used class of pesticides that are particularly harmful to bees, according to a study published on Tuesday.

Neonicotinoid pesticides, also known as neonics, are used on more than 140 different types of crops, from apples to rice. Neonics are most persistent in corn and soybeans as the pesticide is used to coat the seeds of these crops.

Neonics work by attacking the nerve cells of insects, compromising their behavior and often killing them directly. The pesticide was developed in the 1990s as a solution to insects developing immunity to other types of pesticides.

The new study is the first to quantify the effects of neonics in the US over the span of time since the pesticide was introduced to crops. But researchers have been sounding the alarm about neonics for years, particularly because of growing evidence that the pesticide could be a major contributor to declining bee populations.

“We have not learned our lessons. We know neonics are one of the most toxic classes of pesticides to bees ever introduced into agriculture,” said Kendra Klein, an author of the study and a senior scientist at not-for-profit Friends of the Earth. “There’s this fundamental recklessness and foolishness to introducing [neonics] and continuing down this path.”

Researchers used three types of data to conduct the study: the specific amount of pesticides used in the United States, information about the persistence of pesticides in the environment and data on the toxins found in honeybees. They found that, between 1992 and 2014, neonics accounted for 92% of the increase in toxicity.

Neonics are particularly dangerous because, unlike other classes of pesticides, they can take months or years to wear off.

The pesticides are also persistent because they are “systemic”, meaning they are dissolved and absorbed into the crop, leaving every part of the plant, from its leaves to its nectar and pollen, affected by the pesticide. Washing the leaves or the fruit of a crop, for example, will not get rid of the pesticide. This also means it also has the potential to contaminate other plants and water sources in the ecosystem, including rivers and lakes.

Steve Ellis, a commercial beekeeper in Minnesota, said he has noticed the impact of neonics on his bees for years. When neonics started becoming prevalent in the early 2000s, beekeepers started noticing what they nicknamed “Mad Bee Disease”.

It took a while for beekeepers and researchers to deduce what could be causing symptoms like an inability to navigate and weaker immune system. Years of analysis eventually pointed to systemic pesticides such as neonics.

“I’ve documented and seen massive bee killings at the time of corn planting. The dust comes off the corn seed and drifts on to flowers and flowering plants at corn seeding time and makes them toxic,” Ellis said.

“It’s enough to kill them instantly. They come back and they’re suffering a lethal dose, lying on their backs dying from gathering the nectar and the pollen from the willow trees adjacent to the corn field.”

Bees have been dying in alarming numbers across the country. A June 2019 study found that beekeepers had lost 40% of their honeybee colonies over the past year, partly due to the use of pesticides. Bees are an essential part of the agricultural system, as they pollinate three-quarters of all crops.

The European Union banned the most dangerous neonics in 2018 after an EU scientific risk assessment found that the class of pesticides posed a serious danger to bees.

But in the US, progress has been slower than many beekeepers would like. The most recent victory came in May, when the EPA banned 12 types of neonic products. A bill called the Saving America’s Pollinators Act that bans all neonics was also introduced in the House in February.