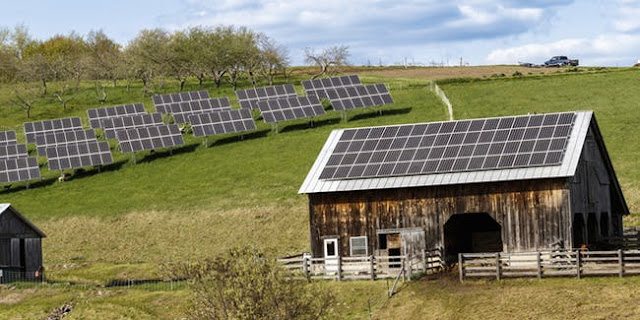 Farms could hold the key to meeting humanity’s energy demands and ushering in a greener, more sustainable future.

Research from Oregon State University that was published last week shows that covering just one percent of the world’s farmland with solar panels would be enough to meet global electricity needs. The findings, which looked at five Tesla-supplied setups in the area to model a global solution, have been published in the journal Scientific Reports.

“There’s an old adage that agriculture can overproduce anything,” Chad Higgins, an associate professor in OSU’s college of agricultural sciences, said in a statement. “That’s what we found in electricity, too. It turns out that 8,000 years ago, farmers found the best places to harvest solar energy on Earth.”

The setup, known as both “agrivoltaics” or “agrophotovoltaics,” has been shown in previous research as a more efficient way of using the same farmland. It could benefit crops and provide power for both the farm itself and the broader community.

Agrivoltaics: How It Works

Crops take up land. Solar panels also take up land. But solar doesn’t need to sit directly on the ground like the crops, so why not place them over the crops to better use the land?

That’s the thinking behind agrivoltaics. One of the first to outline the idea was Adolf Goetzberger and Armin Zastrow, who wrote a 1981 paper in the International Journal of Solar Energy calling for solar panels to be placed two meters above crops.

The University of Hohenheim in Germany explored the idea in 2017, and found that it could hold great benefits. They studied 720 solar panels covering a number of crops to see the change in yields. Clover grass yields dropped 5.3 percent, and others like potatoes and wheat by 18 percent, but the energy could match the farm load and send surplus energy to a nearby utility company.

It also meant each square of land was producing more than two separate installations: 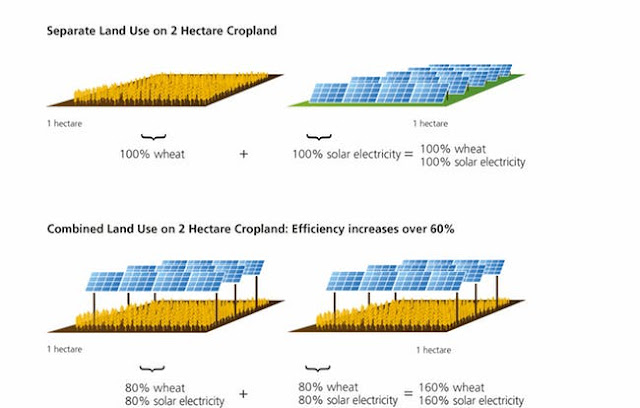 The system in practice.

The idea has seen great success in some areas. Two farms located in Japan were able to produce both 4,000 kilowatts of electricity and 40 tons of cloud-ear mushrooms each year. The Fraunhofer Institute For Solar Energy Systems, which worked with the University of Hohenheim on the 2017 research, has tested three pilot projects in Chile, growing cauliflower and herbs. 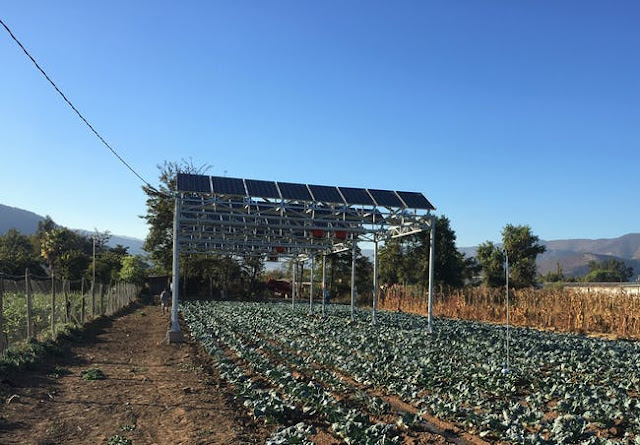 One of the three Chilean agrivoltaic projects. This one, located in Curacavi, is growing herbs.

Agrivoltaics: What the Team Found

The Oregon State University team looked at power production data from Tesla, which operates solar arrays on agricultural lands owned by the university. They then compared this data with that from microclimate research stations, which gathered data about air quality, wind, humidity, soil and incoming solar energy.

They used this data to produce a model of how solar panels work in heat. Essentially, the cooler the better.

“As the conditions became more humid, the panels did worse,” Higgins said in the statement. “Solar panels are just like people and the weather, they are happier when it’s cool and breezy and dry.”

Higgins and his team then took that data and compared it with World Bank data about global energy demands, placed at 21 petawatt-hours. Crop lands, the data found, could offer 28 watts of energy per square meter as a median average. That would enable less than one percent of cropland to power the world.

It’s a bold idea, one akin to powering the world using the Sahara desert. But with global average temperatures rising up and a need to reduce carbon emissions, some radical thinking probably wouldn’t go amiss.